Everyone hearts The Maccabees

Although a lot of northern-hemisphere folk cite deadly animals, BBQs and bronzed girls in bikinis when they’re asked about Australia, Felix White from The Maccabees uses the Australian cricket team as a reference point for the country. The sports-mad guitarist admits, “I love them – I grew up thinking I hated them and now that players like Shane Warne have retired and they’re doing different stuff, I’m like, ‘Ooh, I really like him’. So when I think of Australia, I think of the cricket team.”

The five-piece known as The Maccabees are heading to Australia in May for the Groovin’ The Moo Festival – their first time on Aussie soil. Although it might not be cricket season, the festival will take them to regional parts of Australia, not just the usual ports of call scheduled for most artists visiting the country. White seems suitably excited by the band’s itinerary.

“We’re always jealous of bands that get to tour Australia. It’s nice to be ticking that box,” he says. “And Public Enemy are on the lineup. That is like the coolest thing ever.”

Formed in 2003 when guitarist Hugo White rounded up schoolmates Orlando Weeks (vocals) and Robert Dylan Thomas (drums), The Maccabees’ original lineup was completed with the addition of Felix, Hugo’s younger brother. They’ve since been joined by bassist Rupert Jarvis, and, since the second album, Sam Doyle on drums. Being in a band with your brother, is there much rivalry?

“Oh god no, my other brother Will is involved as well – he plays keys for us live and on the record as well,” White says. “We get on just great. We kind of argue the least out of everyone. I know it’s boring but it is the truth.”

White is refreshingly down-to-earth and claims the band’s success is down to hard work.

“I always thought there was some secret or trick to being in a band, but when you get to our stage you realise it’s just persistence.” 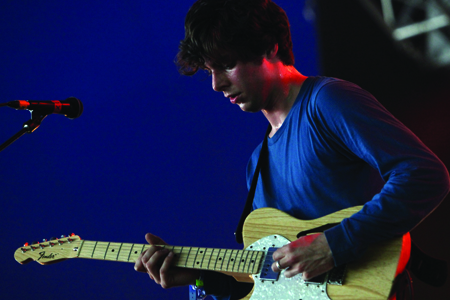 The band have just released their third album, a follow-up to 2009’s Wall of Arms, entitled Given To The Wild, it is the product of two years of writing and recording.

The Times called their latest release a “Maccabees’ renaissance album”, which for such a young band is a compliment laden with responsibility. Is it their best album so far? “I’m sure all bands will tell you their latest one is their best one. I genuinely do think it’s massively new ground for us and I’m dead proud of it,” White says.

The writing process was different this time around. For several months, The Maccabees went their separate ways, individually creating their own textures for the album. And that time apart has perhaps infused the album with a more unique, layered sound.

“After the second album we were kind of sick of writing in a room together and it started to feel a bit limiting. Basically, we got much better at writing with Logic [a computer programme] and doing the production ourselves so we would send loops back and forth to each other,” White says. “It has ended up being a different record to anything we’ve ever done. I think it has a lot more character and personality and a lot more eccentricities.”

The album is gaining recognition for a band that still seesaw between being a small indie band and fully-fledged rockstars.

“We’re at a funny stage because we’re starting to play really big festivals at home, but then we also do the smaller clubs abroad,” White says. “One week, we’re playing to thousands of people and another week there’s just a few people in the club.”

However, it’s safe to say things are looking up for the boys who once missed out on a local Battle of the Bands title to a girl-group called Red, who, according to their website “played covers, had massive afros and wore miniskirts”.

If they are to be catapult into becoming world-famous rockstars, White’s level-headedness will hopefully keep The Maccabees’ feet firmly on the ground. Asked if he could have anything on his rider in Australia, he settles for some humble pistachio nuts. “But I would be happy if I never saw another ham sandwich again,” he quickly qualifies.

The band spent six years earning their crusts – no pun intended – and it seems the hard work is paying off in 2012. It’s not just the Australia tour; they’ve also been added to the Reading and Leeds festivals. Lead singer Weeks told NME recently it was “an honour to be so high up the bill”. 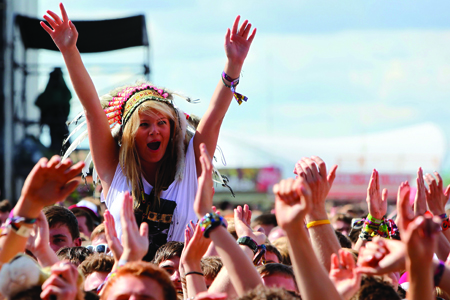 It appears Given To The Wild has started opening doors for the band, but it’s often perks outside the music that register most satisfyingly. White, a massive Fulham Football fan, gushes about the welcome fringe benefits that accompany being a more widely recognised band: “The Maccabees have been invited by Fulham Football Club to go and interview the players. Little things like that, you just think, I’m living the dream right now. It’s beyond cool.”

Given White’s thick south London accent and passion for Fulham FC, it’s a mystery why The Maccabees are so often referred to as a “Brighton band”.

“Orlando, the singer, who kind of got the band going, did a degree down there while we were in London,” White explains. “We decided to join him there and did some excuses for degrees in Brighton. We all dropped out after six months. Fortunately we got a record deal within that year and moved back to London. We were lucky.”

One Wikipedia ‘fact’ he does confirm is the origin of the band’s name. Rumour has it they flicked through the Bible and settled on the name of a Jewish rebel army.

“Yeah, it is true – we try and think of better stories for this question” White says. “But yeah, we were thinking about what to call the band and a mate of ours was flicking through the Bible and said, ‘The Maccabees’. That was that.”

You’re not a Bar Mitzvah band on the side? “Ha, no, it doesn’t mean anything else to us other than just a cool name for a band. And I still think it is.”

Critics, as they like to do, have touted The Maccabees as all sorts of things, from “The British Arcade Fire” to “The new Coldplay” to “The new Oasis”, a compliment that strikes a chord with White. “The first album I ever bought was (What’s the Story) Morning Glory? It was an inspiring record at such a young age,” he says.

Although White shrugs off these flighty record company terms, he’s willing to admit to a few starstruck moments in the industry. “A couple of years ago I ran into Andy Bell from Oasis. When I saw him, something from my childhood just came back and my stomach jumped. I had a brief chat with him and he was lovely,” White recalls. “You wouldn’t necessarily be starstruck meeting people you respect now, but it’s funny how those pop stars from when you were young always have that effect.”

The Whitsundays: Welcome to paradise

Sleeping in a slammer