It may lay claim to being the world’s biggest island, but Greenland is still one of the least-known corners of the planet. I have flown across that big, icy place – ice covers much of the country and can be 3km thick – countless times en route to North America from London, but it is not somewhere that many travellers venture. Yet this weird and wonderful oddball oasis of sled dogs, musk ox, glaciers and shimmering icebergs is one of the globe’s most compelling corners, as I discover when I head above the Arctic Circle.

It is hard not to like Greenland; it’s one of those endearingly quirky destinations that is quite unlike anywhere else. During my first night, I learn it forms a whopping 98 per cent of the Kingdom of Denmark. Though physiographically a part of the continent of North America, it has been politically and culturally associated with Europe for about 1000 years.

This is an early sign of its tendency not to conform to the norm, and indeed Greenland’s very name is a misnomer, considering the country has only small sections of greenery. Indeed, Greenland was not allowed to join FIFA, not because it is officially part of Denmark, but because it doesn’t have any grass football pitches. If that’s not enough, then what about the fact that it’s a country where none of the towns and cities is joined by road, and the main way of getting around in winter is being hauled by sled dog? 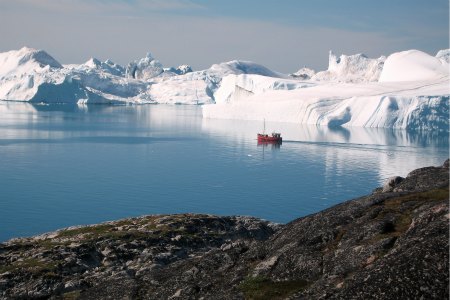 Greenland takes surreal to new extremes. Everything is supersized and surprising. After arriving in the old US military base of Kangerlussuaq I cruise along the Sondre Fjord, a tiny line on the map, but in reality a sweeping 150km aquatic canyon surrounded by colossal mountain peaks with not a soul in sight.
As it is summer, I have plenty of time to soak up the experience – it doesn’t get dark at all this time of year. Known as the Land of the Midnight Sun, Greenland’s never-ending rays mean you can walk out into the late night and see the fire in the sky hanging low on the horizon.
The scenery in Greenland is year-round spectacular: in summer its coast is sprinkled with icebergs – accompanied by some teasing green patches – while in winter everything is enveloped in snow and ice. The one common factor is the climate: average temperatures do not exceed 10?C, even in the warmest summer months.

Pushing north, I come to Sisimiut, the second city of Greenland. I say city, but I’m speaking relatively, as Sisimiut only has 6000 inhabitants. Mickey, a renowned local artist I meet, points out that the whole country has a population of fewer than 60,000, giving native Innuit people like him – the term Eskimos these days is a definite no-no – a unique view on the world: “We don’t look at time the same way as you. We live in the present and are at one with the land and all the animals in it.”

As well as living with the animals, I soon discover the Greenlandic people hunt them too. They hunt whales (on an agreed quota system) as well as musk ox (wacky massive goats that look more like seriously hairy bison), and even seals. When I arrive at Itilleq, a tiny island sprinkled with the charming, brightly painted wooden houses you get all over Greenland, a freshly killed seal lays in a boat at the pier. It’s not an unusual sight in a country where a man’s first seal kill is something to celebrate. Hunting in Greenland is not something done for sport, but rather for food. It is also deeply ingrained in the culture. Everywhere I go, my own views on hunting are challenged – something I have in common with every traveller I meet in Greenland.
Getting around Greenland is all part of the fun. I travel using the local coastal ferries, but you can fly by plane and helicopter with Air Greenland. I also spend a week on an expedition cruise with Hurtigruten (hurtigruten.com). These are not cheap, but their Polarcirkel excursion boats get you into all sorts of secret places and hidden corners. Between trips ashore I stare out of my cabin gripped by passing humpback whales and pods of dolphins.
All very Greenland. 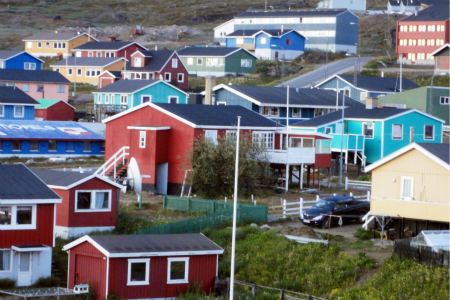 The regular summer-only lunch buffets at Sisimiut Community Centre are a great way to sample genuine Greenlandic fare. The strong-of-stomach can try the likes of reindeer, seal and whales. The musk ox dishes are delicious. Greenland doesn’t always do addresses, but Sisimiut is small enough to guarantee that you’ll find it.

Nasaasaaq, Hotel Sisimiut is a hotel restaurant worth heading to even if you’re not staying. The stylish dining space offers Greenlandic specialties and some well-executed international dishes too. The buffets on the first Sunday of the month are legendary. (hotelsisimiut.gl)

You’re in good hands at Restaurant Ulo, Hotel Arctic, as one of Greenland’s most celebrated chefs, Jeppe Ejvind Nielson, is at the helm. A fine dining treat ideal for that once-a-trip blowout. (hotelarctic.com)

As rough and ready as most bars in Greenland, Pub Raaja in Sisimiut might even be slightly rougher and readier than usual, but it’s welcoming to travellers popping in for a beer or two. (Find it at Nikkorsuit 4, tel. +299 865526)

Murphys in Ilulissat is a great bar that stages regular live music. And it’s not just local acts taking to the mic – Scottish crooner KT Tunstall was recently here. They usually stock some decent local beers, as well as the ubiquitous Danish brews. (Find it at Fredericiap Aqqutaa 5, 3952; +299 942242)

By day a café/restaurant, by night Naleraq Café Ilulissat hosts live music and club nights. Ibiza this is not, but for an unpretentious party it can be good fun. (Find it at Kussangajaannguaq 23, tel. +299 944360)

The old workers’ accommodation at Ilulissat Youth Hostel boasts 44 rooms, each with two beds. A great place to meet other travellers and plan your Greenland adventures, the communal kitchen also helps keep costs down in this expensive country. (ilulissathostel.com)

Ice Camp Eqi is a remote camp with six cabins 80km north of Ilulissat, and overlooks a spectacular glacier. A great base for hiking, if it’s remote you’re after, then this is the place. (go2greenland.com)

It may be geared towards the business community, but the modern Hotel Sisimiut is fun too, often hosting summer parties and wine tasting. They have gigantic Sunday buffets guaranteed to fill you up for a week. (hotelsisimiut.gl)

Air Greenland flies direct to Sisimiut from Copenhagen, starting at about £332pp one-way (airgreenland.com). Local coastal ferries by Arctic Umiaq Line cost anything from £39 to £460, depending on where you are sailing (aul.gl).

The gastronomic capital of South Africa