Swallows shoot back and forth like bullets. One or two perch briefly on a rock jutting out from beneath the cavern ceiling. Seconds later they dart across the boulder-filled turquoise Liwu River and plunge into one of the small pot hole nests in the marble cliff face opposite. The swallows are making a comeback in Taroko Gorge. Their numbers were in decline not so long ago until the authorities carved a separate tunnel to divert the daily convoy of coaches and tour buses that had scared them away. This area is called Swallow Grotto, and is one of Taroko Gorge’s star attractions, not least for the picture postcard views of everything that epitomises why Asian tourists flock in droves to this remote part of Taiwan.

Steeped in lush vegetation that carpets the craggy, mountainous landscape in thick sprawling green forest, Taroko Gorge is an 18km marble canyon situated on the remote Taiwanese north east coast in Taroko National Park, around two hours by train from the capital Taipei. Hordes of tourists from Japan, Korea and more lately China, pour out of tour buses on a daily basis, which chug their way through the gorge from about 9.30 till 5, meaning a visit outside of these hours can redefine the meaning of bliss.

Taroko Gorge is a geologist’s heaven. The story goes that it was formed 12 million years ago when tectonic plates collided pushing thick layers of rock high above the ocean surface to the lofty peaks hundreds of metres high that we see today. Originally limestone, these slowly metamorphosed over centuries into marble, which was gradually eroded by the force of the Liwu River creating the vertical valley of the gorge. It’s thought the land mass continues to rise by half a centimetre each year.

There’s only one way through the gorge and that’s via the Central Cross Island Highway, a thoroughfare which calls at all of the gorge’s main sights. The 80km highway was built in the 1950s to connect Taiwan’s much more urbanised and densely populated west coast with the rural slower-paced east side. The stretch running through Taroko is an incredible feat of engineering, with the twisting roads and tunnels carved out of the rock by blasting through the thick marble cliffs. Even more staggering is that much of this was achieved by workers hammering away with picks. Yet behind this lies a tragic tale. More than 200 mostly ex-military personnel were killed by rock fall during the building of the highway. Their loss of life is remembered at the Eternal Spring (Changchun) Shrine, one of the first (or last) stops for visitors to the gorge, which fittingly overlooks the highway with its 45ft waterfall, ever-flowing, never forgetting. Again get here early, or late in the day, when it’s not gridlocked with coaches. 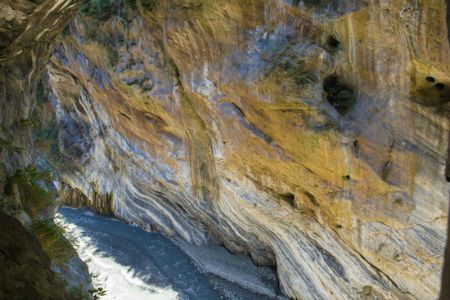 Back in Swallow Grotto, the signs warn visitors to pass through quickly and to beware of falling rocks. Indeed many tourists have taken note and borrowed one of the free helmets available at the visitor centre. The dangers of traversing the gorge remain very real and from time to time roads are closed for safety reasons. A few kilometres and hairpin bends up the highway, the Tunnel of Nine Turns promises more marble magnificence, but it’s been closed since 2013 due to rock fall and it’s not clear when it will reopen. Accidents, while rare, do happen in the gorge, and means Taroko often finds itself listed among the top dangerous roads in the world. It’s worth checking out the visitor centre before you enter the gorge, to get the latest on where you can and can’t go.

Prior to reaching Tianxiang, the park’s main town and “end” of the gorge, two crested serpent eagles fly overhead near the Lushui Trail. Before the highway was built, this was part of the old east-west mountain road used by Taroko’s tribal ancestry. Today it’s an opportunity to explore the rich ecology of the park, and observe some of the 152 species of birds, 302 types of butterfly, 46 species of large mammals including sambar deer, Formosan monkeys and the extremely rare chance of spotting an endangered black bear, while exercising a bit of caution in the event of an unlikely encounter with a deadly pit viper. As a rule of thumb, any snake with a triangular head should be given a wide berth.

Most buses terminate in Tianxiang, which has a handful of small restaurants, souvenir shops, a couple of hostels, and the only five star hotel in Taroko. It’s most people’s halfway house, and a convenient place to stop off for lunch before crossing the suspension bridge opposite and making the short climb to Xiangde Temple and the neighbouring seven-storey Tianfeng Pagoda, which were built in the sixties. Inaccessible to traffic, here you can enjoy stunning panoramic vistas of the gorge next to a giant bodhisattva statue while taking some Buddhist respite from the bustle down below.

Helmet-clad tourists continue to arrive at Swallow Grotto. The swallows swoop like arrowheads inhaling insects as they fly. The marble grows another wrinkle, turns another colour. The rush of waterfall gushes somewhere in the near distance. A smidgen of rock crumbles. The aboriginal Trukki tribes gave Taroko its name. They called it magnificent.

TAROKO GORGE – WHERE TO GO
You can cover the gorge in a day but you’ll only be able to make fleeting visits to each of the main trails and landmarks. It’s more rewarding to pick two or three and spend more time at each one. Highlights: Eternal Spring Shrine, Swallow Grotto, Buluowan, Shakadang Trail, Tianxiang.

HOW TO GET THERE
Most visitors base themselves in the city of Hualien which has regular buses heading to the gorge. You could save nearly an hour on your journey by staying in Xin Cheng, the main village just below Taroko National Park, although there is much less to do there. Trains from Taipei to Xin Cheng (less frequent) and Hualien take approximately 2hr to 2hr 30min.

Give us a giggle: Comedian Stephen Carlin on gambling and pantomines