Roberto Martinez’s side were up against it from the outset, up against a side as hungry to make the top four and a Champions League birth as Wigan were to extend an eight-year stay in the top flight with another great escape.

Wigan started at the Emirates with the same team that beat Manchester City on Saturday, but an early header from Lukas Podolski for the Gunners to turn the uphill battle into Everest.

However, a Shaun Maloney free-kick leveller gave them hope.

Only a win would do for Wigan, but the class of Arsenal rose to the surface and then rubbed salt into the wound, first through Theo Walcott, then a second from Podolski and a clincher for Aaron Ramsey.

Arsenal are now a point ahead of Tottenham going into the final weekend and the Champions League is in their hands.

Wigan’s demise to the Championship, although playing in the Europa League, means safety’s now guaranteed for Sunderland and Aston Villa. 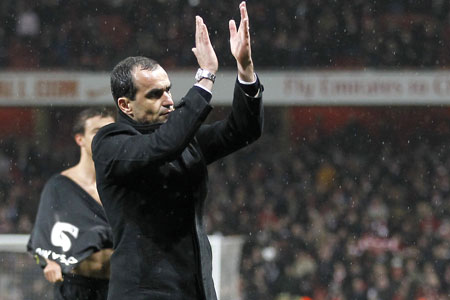 Martinez has been linked closely with the vacant Everton position, but has refused to give any hints to his intentions until his side’s tough run was complete.

He did however hint at his intention to bring his side back to the big time asap.

“The relegation is really disappointing but it’s something we can rectify,” he said. “We have to make sure we get stronger. We’ll bounce back, as we always do, Wigan-style. The club is on a fantastic financial footing. We have huge assets. The football philosophy is there for the long term.”

Arsenal manager Arsène Wenger believes Wigan would “certainly come up again if they stay together”.