So named for the traditional practice of indulging in fatty foods before the ritual fasting season which kicks off on Ash Wednesday, this celebration has its roots in French Catholicism and is celebrated around the world in a variety of ways, each with their own peculiarities and homespun traditions.

In Belgium, Mardi Gras is celebrated with 1000 gilles (traditional dancers wearing wax masks) who cavort across the city throughout the day. In Germany, where the celebration is known as Karneval, parades and festivities take place across the country in cities from Cologne to Berlin. In Sweden, where it is known as Fettisdagen, the celebrations are shaped around the eating of semla, a sweet dessert roll, marking their last indulgence before the fasting period for Lent commences. In Italy, Mardi Gras, or Martedí Grasso as it is known, holds its biggest celebrations in the cities of Venice, Viareggio and Ivrea. Similarly, in the Netherlands, where the celebrations are known as Carnaval – which comes from ‘carnevale’, or ‘goodbye to the meat’ in Latin – a period of indulgence and partying ushers in the fasting that, in time-honoured tradition, is to come. 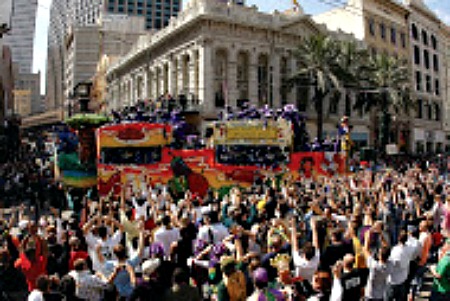 To many people though, Mardi Gras means one thing, or more specifically, one place in particular. In the United States, especially in cities of ethnic French origin, Mardi Gras is celebrated with gusto, passion and music, food and dance, and no more so than in the capital of Louisiana, New Orleans.

The Big Easy, as it is colloquially known, sees thousands of people descend on the town for the two week period of partying, celebrations and decadence that marks this annual event. It truly is one to be seen – and experienced – to be believed.

Flights from London to New Orleans from £450 with American Airlines aa.com

Get in the spirit

It is one thing to come down, grab a brew and get in the party vibe, but if you only came for the dancing and drinking, you would miss out on a huge part of what Mardi Gras in the Big Easy is all about.

As much as it is about debauched decadence, it is also about the cultural history that started this celebration back in the 1700s in New Orleans. So while you can don some traditional costuming and line the route, we also recommend getting out and exploring the numerous other parties, events, and balls that take place across the city to make the occasion.

One not to miss includes the Meeting of the Courts ceremony that marks the end of each year’s Mardi Gras, in which Rex (the appointed king of Mardi Gras) and his Royal Consort attend an end-of season bash that takes the year’s party fortnight out in style. rexorganization.com

It’s all about letting your hair down, relinquishing your inhibitions and getting down with the party mood. Famed for its truly good-times vibe, the New Orleans Mardi Gras is infamous for its hedonism. Masks, music and food all take centre stage in the season, which is centred historically around the French Quarter of the city.

There are parades each day of the fortnight-long season, with street events organised by private clubs known as krewes. Colourful fancy dress fills the streets, ‘throws’, which can be anything from colourful beads to plastic toys, are tossed out from the parade to the crowd, and there has been an evermore popular trend in recent years for flashing along the route in order to cajole those on the parade to send more throws out into the crowd. There are more family friendly parade routes, but that would miss the point of it all, right? mardigrasneworleans.com

New Orleans is not just about Mardi Gras – it is a fascinating city steeped in culture and tradition. With influences coming from Europe, Africa and the Caribbean, it is a melting pot of culture, food and music, with events taking place across the city all year round, from an autumn Voodoo Music festival, a Boudin, Beer and Bourbon season, and, of course, all manner of events that celebrate its jazz music heritage. Befitting a city that is seen, quite rightly, as the festival capital of the world, there is everything from music, culinary, art, theatre and multicultural events throughout the year, such as the Tenessee Williams fest, in honour of one of the city’s most famous sons, the Dirty Linen Night, the Louisiana Swamp Festival, and the Treme Creole Gumbo Festival. You’ll never be short of a party in New Orleans. neworleansonline.com 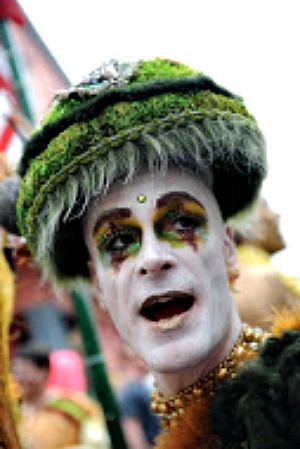 Got that festival feeling? Check out TNT Tour Search where you can find incredible deals on festival experiences.

The Green Machine aka Creme Soda

Big Ben to be renamed Elizabeth Tower after the Queen