It’s 7.30am and people are congregating outside the Löwenbräutent, ready for a day of solid drinking. They’re here early, keen to get inside because getting your bum on one of the sought-after wooden benches is the most essential step of procuring a stein (a massive beer glass) – and if you don’t get one of those, you won’t be served. Epic fail. Once a seat is found though, you’re sorted for the rest of the day and can focus on what’s important: downing, singing, eating and dancing.

Beer is served from 9am on weekends and 10am on weekdays. It’s a tad earlier than you’d normally crack open the first drink of the day (for most), but pretty soon you’ll be caught up in the raucous atmosphere of the festival, best described as ‘Disneyland for drinkers’. All the lagers served are regional and adhere to the strict 1516 Bavarian Purity Requirements, which mean only water, hops and barley can be used to brew them.

Names you’re likely to recognise include Augustiner, Paulaner, Spaten-Franziskaner, Löwenbräu and Hofbräu. Different beers are served at various tents, so pick your favourite and get right in among it, remembering the golden rule of drinking – buying a strange woman a drink is cool, buying them for her all day is dumb. But as good as the drink is, it’s not only the amber brew that’s tempting to visitors.

The tents are surrounded by a large fairground with rides – rollercoasters, bumper cars, carousels and games – meaning there’s plenty to keep you entertained. Indeed, this will most likely be the biggest and best party you’ll ever attend. Just make sure you go on the rides before the drink is already making your head spin. So, TNTers, we urge you to go forth and enjoy this 16-day glug-a-thon, do-before-you-die piss-up that chugs on from September 20 until October 5 this year, continuing a 204-year-old tradition. Eins, zwei, drei, DRINK!

Want to experience Oktoberfest for yourself? Book here with TNT Tour Search.

How did it all begin? Oktoberfest began innocently enough: when Crown Prince Ludwig married Princess Therese of Bavaria on October 12,1810, the National Guard organised a large horse race by way of public celebration. A thoroughly good time was had by one and all, so they decided to throw a party the same time the following year, and so on. A festival has run annually ever since, morphing from a stint as an agricultural show to what is now a behemoth celebration of Bavarian beer. Today, the world’s biggest fair sees more than seven million litres of beer guzzled, 90,000 litres of wine consumed and nearly 120,000 pork sausages eaten. Come September, the poor piggies must be very dis-grunt-led (sorry).

What to expect: The party officially kicks off at noon on the festival’s first day, when Munich’s lord mayor taps a keg of beer and cries: “O’ zapft is”, or, “It’s tapped”. Only then can visitors quench their thirst. Each tent has its own character, from the funky celebrity-packed Hippodrom and the youthful Löwenbräu, to the displays of yodelling in the Braeurosl and traditional roasting of oxen in the Ochsenbraterei. Yodelling performances, oompah bands and a fairground keep the crowds entertained. 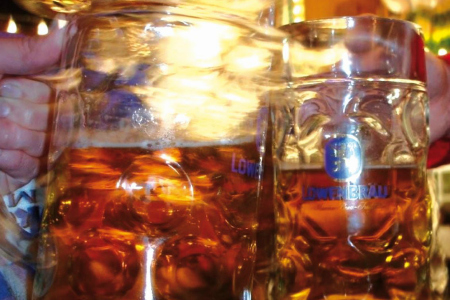 Get in the spirit: Half the fun of Oktoberfest is getting kitted out in traditional German outfits for your drinking session. For fellas, this means a red checkered or white shirt with lederhosen (long leather shorts) and braces. Ladies, a full dirndl includes a bodice, blouse (the boobier the better), full skirt and apron. As for those felt alpine hats with a feather… sure, why not? These outfits are available all over Munich, but the more authentic ones can be quite pricey, upwards of £150. Lots of Oktoberfesters cut costs by going second-hand, or even making their own. Buying the overly skimpy outfits available online or from sex shops is tempting but is a big no-no, as Munichers don’t approve.

What else? Most people might spend their time in Munich inside a beer hall, but there are plenty of sights to stumble around if you care for fresh air. One of the most popular is the Rathaus-Glockenspiel, essentially a giant cuckoo clock on the town hall that enacts stories from Munich’s 16th century history, with the help of 43 bells and 32 life-size figures. The Frauenkirche – or Cathedral of Our Dear Lady – is Munich’s spiritual masterpiece, an imposing church said to house the devil’s footprint. There are a few versions of the legend that attends it, one being it marks where the devil stood as he ridiculed the church. Take a peek at the footprint and make your own mind up.

Want to experience Oktoberfest for yourself? Book here with TNT Tour Search.