Fiji dreaming: We discover the sun-kissed destination is more than just a chill-out heaven

Yes, Fiji is a chill-out heaven. It boasts lush, palm-fringed tropical islands within reach of your average traveller, offering you the chance to behave like a pampered movie star for about AU$60 a day. But, as I discovered on a recent trip, it’s also got a lot more.

During my too-short, six-day visit I rafted down rivers, hiked through jungle, visited remote villages, kayaked to desert islands, partied barefoot in the sand, witnessed a traditional kava ceremony, swam in stunning waterfalls and snorkelled off multi-coloured fringing reef… 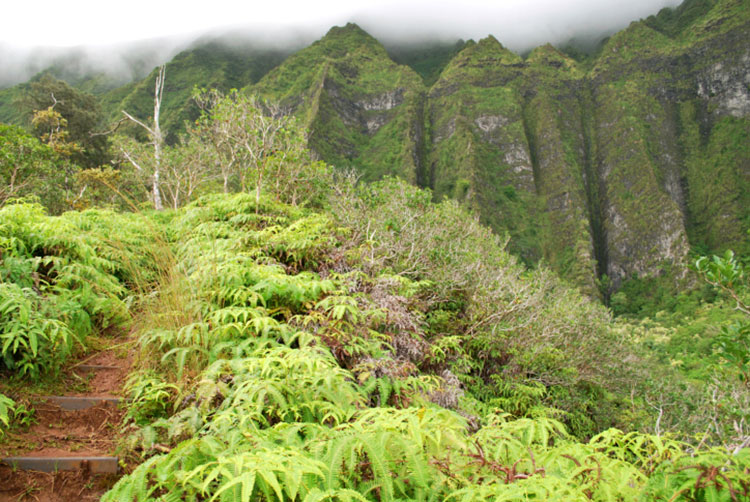 I’m not really the intrepid type. I mean, I like a good constitutional as much as the next person but I’m English – I like a brisk country walk that ends in the snug of a pub. But now I’ve been on an honest-to-goodness jungle trek, there’s no looking back. Just call me Lara Croft. Or, erm, Jane.

Navua was the stop for our “walk”. The bushland is dense, the hills look bloody big from the bus and our guide was wearing wellies. Well, one of them was, the other was in bare feet. For a supposedly two-hour walk, this mixed message was unsettling.

Three hours later, we were still wading through a knee-deep stream (a-ha! wellies!) that we seemed to have been following forever. We had already wobbly-walked over log-bridges, slid down muddy hills on our bums and been blown away by seemingly endless views of lush forest.

We all felt like Indiana Jones and it was bloody marvellous. It was even better when we finally glimpsed the river that signalled the end of our hike. Drenched in sunscreen-flavoured sweat and covered in dirt, all I wanted to do was throw myself in, which I did. Satisfying isn’t the word. Then we jumped in tyre tubes or grabbed boogie boards and kicked our way to a peaceful waterfall. Aaaah…

Sea kayaking to Nananu-I-Ra Island was another adventure I’m unlikely to forget. Setting off at twilight in a posse of five kayaks from Ellington Wharf at Viti Levu’s north-eastern tip, we paddled off into the sunset, literally. It was the most peaceful way to travel, with just the splish-splosh of water on our oars and the view of the island getting closer.

Not being the world’s best kayakers though, it took us a little longer than it was supposed to and we arrived at our island home for the night in total darkness, to a very welcome beer and singalong with the locals. 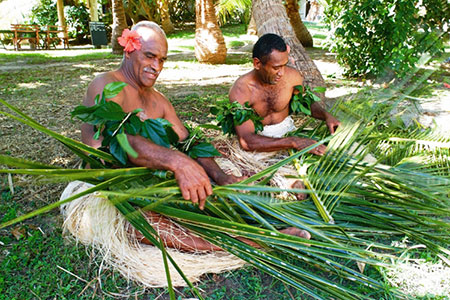 It’s a well-worn cliché that Fijians are friendly. The population is roughly split in two – Fijians and Fijian Indians. In some cities, like Ba in the north, the Indian influence is very strong, hence colourful saris, excellent curries and impressive Sikh temples. In rural villages, you’ll get a close-up look at indigenous Fijian culture.

Everywhere you go away from the main resorts you will get something quite rare – the feeling that you’re a bit of a novelty. As our big green bus drove around Viti Levu we were waved at enthusiastically by everyone from school kiddies to fieldworkers to old folk. “Bula!” is the standard greeting and you will hear it over and over again.

Ollie and Poate, the guides on our trip, were the perfect mixture of friendly, informative and crazy. Ollie was the only one of our group to take the plunge from the highest ledge at the waterfall and was the best dancer of our sorry-arse party by a long shot.

Oh, and a word to the wise girls (and boys, if that’s your bag) – Fijian guys are hot. Big and strong with killer smiles. And they actually make wearing skirts (well, sulus, actually) look like the height of masculinity. Swoon… 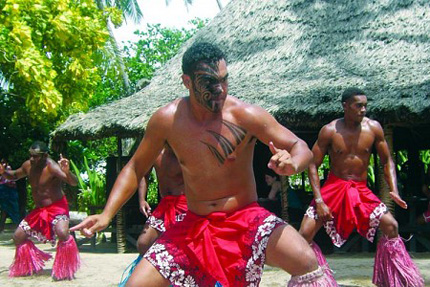 We arrived in Wailotua to go bilibili rafting. The local people had enthusiastically offered to host a rafting race and we were going to be the first to try it. But first we attended a sevusevu (kava ceremony) in the village with the chief, to bless the activity.

My first taste of a kava “ceremony” had been at Stoney Creek, a lovely, breezy resort above Nadi. We’d sat in a rough circle as the kava was mixed up in a blue plastic washing up bowl and we’d giggled nervously as many of us had our first sip of the infamous root juice. It tastes a bit like muddy water and leaves your tongue strangely numb.

A traditional sevusevu, however, was a different matter altogether. It was a very solemn occasion and intensely moving. The ancestors were called upon to bless every footstep the visitors took here and asked to watch over us. The emotion was palpable.

I’ll never forget it. Once the first round of kava was mixed and drunk (men first, in order of rank) the atmosphere relaxed a little and soon there were smiles all round.

Certain protocol needs to be followed when entering a Fijian village. Cover up (no prancing about in a bikini top here – it’s not the place to work on your tan). Don’t cover your head, or your eyes – so no sunnies, no hat. Be quiet, polite and respectful. Don’t stare. Don’t worry, your guide will fill you in as you go.

My bum was in the river tube but my legs were straight up in the air. It’s hard to get comfy in a tyre’s inner-tube and every time I tried, I just fell in again. Luckily, it didn’t matter. I was floating down the Navua River, being carried gently along on the current and the scenery was so awesome, no amount of “I look really stupid” angst could bother me.

Soaring gorge walls, dissected by tumbling waterfalls and covered in lush green jungle towered either side of us. We were heading for a waterfall where we could spend some time lounging, enjoying the incredible view and jumping off rocks into the warm water. Best of all, we were the only people there.

Fiji is lush. It has the whitest beaches, all of them palm-fringed. It has the bluest water and the greenest rainforest and rainbow-hued coral reefs fringing the islands. It’s stunning. The Blue Lagoon was filmed in Fiji at the Yasawa Islands, you know, and for good reason. And no boys, that reason has nothing to do with a proliferation of virgin Brooke Shields lookalikes. 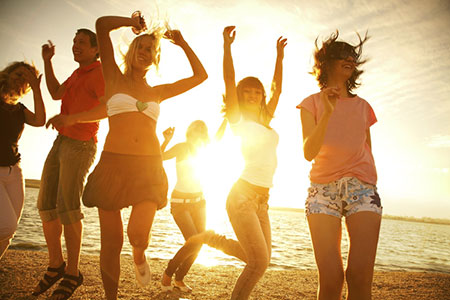 And of course… the parties

Suva is the capital of Fiji. Unlike Nadi, it isn’t a tourist town, but a “classic” south Pacific city. When we arrived in town, the last thing we felt like doing was partying.

For a start it was Sunday and all the locals appeared to be on their way to church, dressed in their smartest sulus, bibles tucked under their arms. And another thing, it was pissing down. The east coast of Viti Levu gets a lot of rain and it was of that very dramatic “wall of water” variety that only occurs in the tropics (trust me, I’m from Manchester, I know about rain).

But somehow, after some yummy nosh at our very pretty hostel, we found ourselves heading out to O’Reilly’s (sounds like an Irish bar, but isn’t like one I have ever been to before), a couple of kavas under our belts. The dancefloor beckoned, the shots came out and suddenly the Sabbath, the rain, the aching limbs from the day’s walk, all were forgotten in a mass of flailing bodies.

There’s something about balmy tropical nights and sand underfoot that make you lose sight of all those good intentions… Beachcomber and Robinson Crusoe Islands both have great party nights.

The other dangerous thing about the islands is that you don’t have to hand over any money at the bar for drinkies, you just have to scribble your name on your room bill. Check out the number of stunned faces at reception going: “Really, 14 sambuca shots?

“Hmmmm… That explains a lot…”

Eating and drinking in Oxford