Bullfighting has been banned in Catalonia, with a final bloody spectacle attracting huge crowds in Barcelona yesterday.

Fans paid over the odds to see six bulls killed in what will be Catalonia's final bullfight. As matador Serafín Marín performed in the packed La Monumental bullring, many aficionados gathered handfuls of sand to take home as souvenirs. 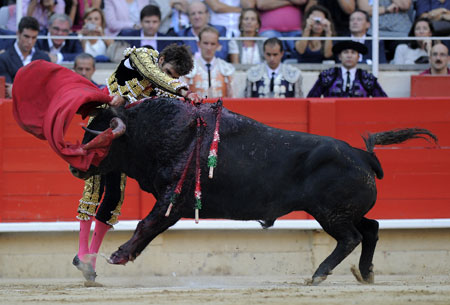 The bullfighting ban has ignited strong emotions on both sides of the camp. Animal rights campaigners have long been battling to outlaw the sport, pointing to the barbarity of killing animals for human enjoyment.

The opposing side has been invoking civil liberties, arguing that bullfighting is a 600-year-old tradition. 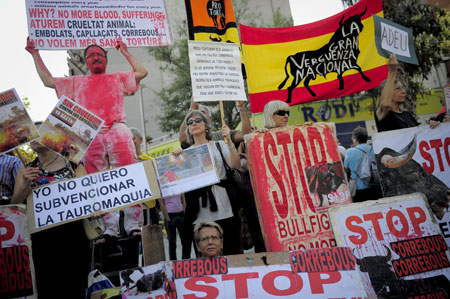 However, with Sunday's fight marking the end of bullfighting season in Barcelona, and with bullfighting banned in Catalonia as of next year, it seems unlikely that the controversial practice will return.

Although animal rights activists are celebrating the ban, critics say that the move was purely political, and not motivated by any sensitivity to the suffering of animals.

According to some, behind the ban is Catalonia's desire to differentiate itself from the rest of Spain. 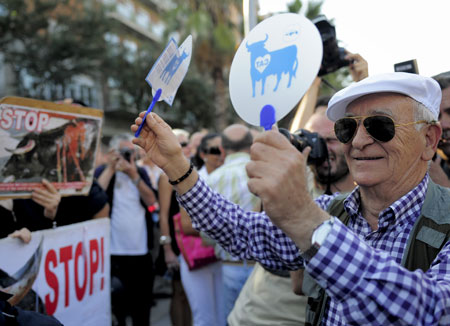 Pro-bullfighting protestors made their feelings known outside the stadium

"The parliament banned bullfighting because it is a Spanish fiesta, not to protect animals," Marín told El Mundo newspaper.

But activists and many Barcelona residents, denied this, saying that the ban a true reflection of their wish to end the suffering of animals.

"Obviously a lot of political parties have tried to politicise this, but we mustn't forget that this popular proposal sprouted from a pure pro-animal rights standpoint aimed at eradicating animal cruelty," campaigner Soraya Gaston said.

Here's why many are happy that bullfighting has been banned in Catalonia: sharkonline.org

Man creates toast in his own image: Selfie toaster launched

A sea change at Brighton