My eyebrows shoot up as I look out from my hotel window, expecting a serene, flawless Swiss morning scene, and instead see two bare bums. It seems my travelling companions have crept out for an early dip in Lake Brienz, sans swimmers.

It’s certainly in the spirit of things. We’ve come to Switzerland’s Bernese Oberland region to experience the great outdoors, so a skinny dip is only appropriate. And it’s the perfect day to be at one with nature. Lit up by the morning sun, the lake is so placid it reflects a mirror image of the mountains that loom on the opposite shore, verdant forests of green running down their flanks. 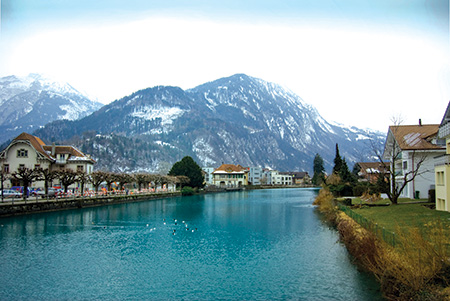 It’s mountains such as these – including the famously mighty Eiger, Mönch and Jungfrau – that give this tiny landlocked country its abundance of water. Lakes and rivers are swelled with glacial meltwater at this time of year, so while the Swiss may not have an ocean at their disposal, they do have the River Aare, a watery playground that offers a heap of activities.

With our swimmers firmly on, today we’re planning to float down the 30km stretch of the river that will takes us from the north-west tip of Lake Thun to Bern. This is a particularly popular section, says Ruedi Jaisli of Zurich-based activity company Swiss Trails, who has organised our trip. “The water here is extremely clear and pure, because the river passes through two lakes where all the sediments can settle so it becomes very clean, so much so that you could even drink it.” 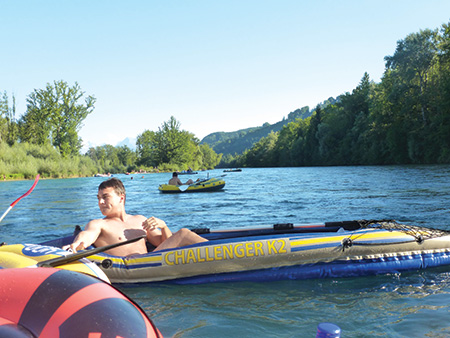 What’s more, the two lakes warm up the glacial meltwater, meaning the water temperature on the Thun to Bern stretch can reach 24˚C in July and August. Consequently, the river is heaving with rafters and swimmers in summer, letting the naturally fast-flowing water (it runs at around 8km an hour) take them downstream with minimal effort – you don’t even need to paddle.

“We bring our own inflatable boats, fill one with beers and supplies, tie them all together and drift downstream,” says 32-year-old Matt Radmore, an English expat living in Switzerland. “You can stop on the riverbank and have a barbecue, and go for a swim when you get too hot.” 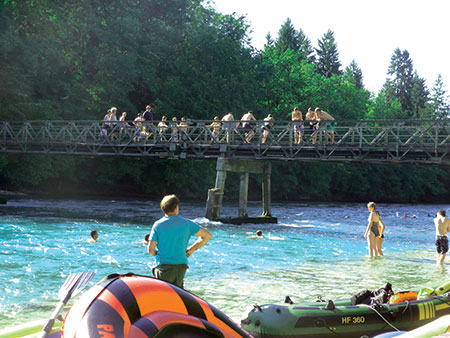 We don’t have our own raft, but Thun-based hire company Aare Bootsvermietung can help with that, and they also provide us with a barrel to keep our belongings dry. They even promise to collect the boat from Bern when we’re done, making this a hassle-free one-way trip.

We hop in and let the vivid turquoise water start carrying us along. Looking back upstream, I can see the mountains where it came from, still impressively snowy even though it’s more than 20°C down here.

Though this isn’t a white water river, the current is fast enough to provide a few thrills. At light rapids called the Uttiger Schnelle I shriek when I see the churning water to the left, like a washing machine on extra rinse. I quickly realise that steering isn’t my strong point, after being smacked by low-hanging branches on the riverbank. 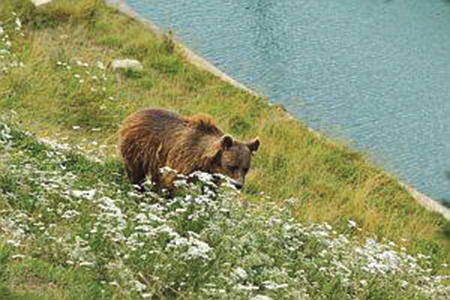 Drama over, we spot see the first of Bern’s 18 bridges, signalling our approach to the capital. On a hot summer’s weekend the water is covered with locals – some even commute to work using the river, with clothes in a dry bag. “You can imagine how much fun it is,” Jaisli says. “Instead of being squeezed into the subway you swim down a river to your office.”

We pull out of the river at Eichholz, a grassy area on the outskirts of the city for picnicking and lounging – the Bernese certainly know how to make the most of the Aare. And as we soon find out, even their famous bears don’t miss out. The symbol of the city (they feature on its coat of arms), bears have been kept in the Swiss capital for 500 years, and since 2009 have living in a grassy enclosure on the banks of the Aare, complete with their own pretty dipping pool.

As we pack up our rafting gear, I only hope this beautiful river gives the Bern bears even a little of the pleasure that the city’s residents clearly get from it.

Getting there Fly from London Luton to Zurich from £88.98 return with easyJet 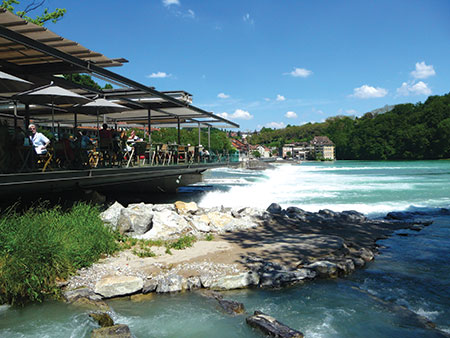 Budget:  Nowhere is budget in Switzerland, but the cavernous Altes Tramdepot near the old bear park tries hard to be. Enjoy a bratwurst and a pint of beer (they brew their own) on the terrace with views of the Aare. Mains from £11.

Midrange: Right on the river (it sits on top of a weir), the terrace of the Schwellenmäetteli (above) makes for a scenic Sunday brunch while you watch the water rush by. Mains from £22.50.

Luxury: Bern’s medieval covered arcades hide numerous cellar bars and restaurants. Wein & Sein (below) is one of the most fashionable, with a menu to match. Mains from £25. 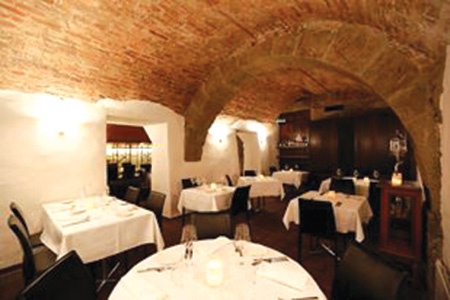 Budget: After watching the hourly display by Bern’s famous 16th-century mechanical clock, the Zytglogge, stop in at nearbyAdriano’s Bar & Cafe for the best coffee in town, plus draught beer from £3.50 for a half-pint (as we said, not cheap).

Midrange: The popular Turnhalle is where Bern’s students and creative types go to think, drink and listen to live music. It’s a great spot to mingle with Bern’s younger crowd over cocktails, from £10.

Luxury: A former wine cellar and granary, the 18th century Kornhauskeller is a must-see – even if you can only afford one cocktail. With vaulted ceilings, wall frescos and an atmospheric vibe, it’s where the beautiful people go. Get Swiss wine from £31. 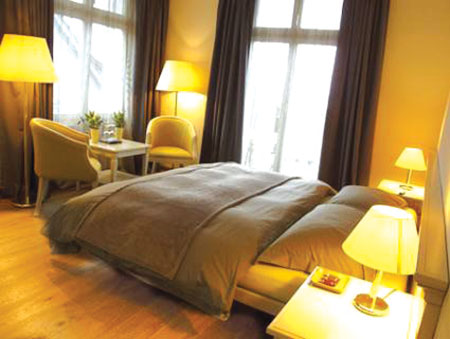 Budget: Pitch a tent at Camping Eichholz, near the finishing point of the float trip. Next to the Aare, with plenty of space to camp, barbecue and throw a Frisbee, it’s an idyllic spot. From £5.50pp a night.

Midrange: The three-star Hotel Kreuz Bern is just a hop from the train station and the old town, making it the perfect crash pad after a night on the schnapps. Doubles from £100pn.

Luxury: A boutique hotel in the old town, Belle Epoque (above) offers plenty of character for your francs: all the rooms are decked out with Art Nouveau furniture and wall decorations. Doubles from £120.

Sergeant attempts suicide after dogs die in his hot car