North-east London burned around him; cars overturned and windows shattered as angry youths in Adidas tracksuits – their faces obscured in parts by bandanas or hoods – took to the streets of Hackney and Tottenham looting and burning everything in their path.

It was wrong though – this didn’t seem like a traditional protest or even an organic outpouring of civic anger and grief at the unlawful slaughtering of a young local man by police. It was just wanton, mindless destruction and, what was worse (for him at least), it was driven entirely by consumerism.

“It was fucking weird, man,” says Steve Mason, looking back on the events of 2011. “That was the perfect day for the establishment – these kids were using a protest as an excuse to break into stores and steal trainers, tracksuits, all the pointless shit that they’ve been taught to think they need. I was in Hackney, with an old girlfriend of mine and this kid came up to me and offered me a new pair of glasses he’d just nicked out of some shop front. It was sad!”

If Mason’s last solo album, 2010’s Boys Outside, was a candid examination of his well documented struggle with depression, then his new album Monkey Minds in the Devil’s Time turns the magnifying glass outwards. It is a searing condemnation of western society’s obsession with consumerism and the negative ways in which politics and politicians impact on all of our lives, whether we’ve voted for them or not. It is also littered with imagery of the 2011 riots – the musical and lyrical ideas of the album seem to have been forged in the very fires that blackened north London. 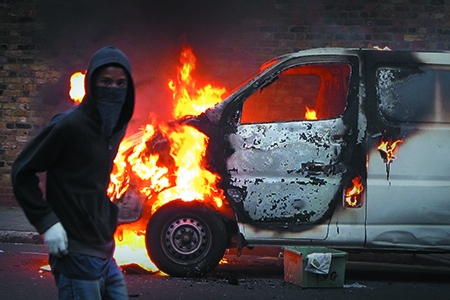 Mason, the former songwriter/lead singer of cult British ‘folktronica’ group The Beta Band, has always been known for being highly vocal in his criticism of many aspects of modern politics. And yet Mason believes it isn’t so much a case of him being ‘outspoken’, as it is the fact he is simply one of the few people “in the public eye” who are willing to express an honest opinion.

“Most of these ‘people’ are really just built up because they don’t have opinions of their own,” he tells me over the phone from his native home of Fife in the Scottish Lowlands. “They won’t rock the boat because they don’t have any real talent of their own and they know that if they put a toe out of line they might find themselves being replaced.”

Monkey Minds is a fascinating album on its own, but when you compare it to Mason’s previous work, it becomes even more so – his albums serve as a sort of public record of Mason’s remarkable transition from being a man too insecure to leave his room to one who can no longer ignore the injustices he sees going on behind his once firmly closed curtains.

“When I was growing up the bands you listened to basically informed your politics and the way you saw the world. Bands like The Clash, The Sex Pistols, Morrissey and The Smiths weren’t afraid to tell things how they saw them. It was better that way.”

The song “More Money, More Fire”, from Monkey Minds, stands as the central pivot around which the other 19 songs on the album turn. Mason cedes the microphone to north London MC Mystro, who spits an incendiary raprant about police brutality and governmental mistreatment of the underclass over a quivering, synth-shocked musical arrangement. There also seems to be a real sense of opportunity lost, melancholic thinking that the London riots could and should have produced some real and effective change from the bottom up were it not for the cultural cul de sac of capitalist thinking.

Juxtaposed with some of the earlier, folkier arrangements on the album, such as “A Lot of Love” and “Oh My Lord”, it is something of an assault on the senses; full of anger and venom. The song’s shuffling beat then follows straight into the subsequent track “Fire!”, which takes “More Fire’s” righteous fury and channels it into a surprisingly playful protest chant. 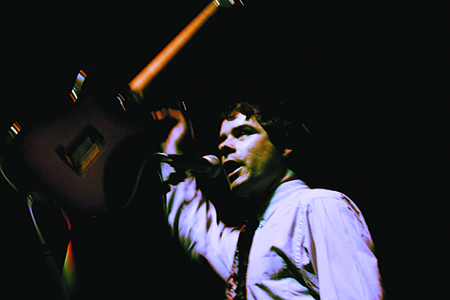 The ‘kicking against the pricks…’ ethos doesn’t end there though. On the string-laden “Fight Them Back”, Mason
seems to casually commandeer a bloodless palace coup with “a fist, a boot, and a baseball bat,” all the while his
call to arms lyrics buttressed by an outrageously smug sounding sample of Tony Blair. It is faintly reminiscent of
the sort of thinking which saw Mason infamously tell 30,000 Americans at a 2001 concert in Texas to shoot a newly
elected President Bush.

It is something of an album in two acts then – the first dealing with well-worn Mason topics of loves lost, his place
in the tapestry of life questioned, answered then questioned some more. The second act a crescendo of political
proselytising – a call to arms for anyone who’s ever felt let down by his or her ‘elected’ officials. It is a sharp u-turn on a
first listen, but for people already familiar with Mason’s work (both with Beta Band and on his own) Monkey Minds will
surely stand tall in their estimation, perhaps even alongside any of the Beta Band’s much vaunted first three EPs.

“It’s [Monkey Minds] supposed to be a journey,” Mason tells me. “Where you start off as a kid and you think of all
the appalling things you can do as well as all the incredible things too. I always had this feeling of responsibility: you and
I have been given a gift – being born as a human being. It was like, ‘okay, but now what am I going to do with it?’”

Despite being in the industry for the best part of two decades, Mason’s appearance at this year’s Melbourne
Festival will be his first ever show in Australia. It will also be, for the time being anyway, his only one to date. When
asked why he wouldn’t be in the country longer, he laughed. “It’s just a money thing, I’ll be coming with a full band and
it’s incredibly expensive to ship all the equipment and the people around. It’s annoying really, I’ve always wanted to
come to Australia and I won’t really be able to stay very long. I’ll have to come back.”

We can only hope so as Mason, aside from being a fantastic musician, is also a thoroughly interesting person, a man of
his convictions who is refreshingly honest to speak to.

For the lucky few who will be there, Steve Mason and his band take to the Foxtel Festival Hub stage on the 15th
of October. For the rest of us, we’ll just have to keep all of our fingers and toes crossed that Steve Mason comes back
to Australia one day. Provided conservative PM Tony Abbott and the ‘establishment’ ever let him back in the country.