And right now is the time to go, before it starts attracting anywhere near the hefty number of visitors Polish hotspot Krakow does.

From a tourist’s perspective, it still feels almost undiscovered.

For its size, Gdansk has played a big part in 20th-century European history. The German invasion of the city (then known as Danzig and an important port) effectively began the Second World War.

And when the Cold War that came later finally ended, the anti-communist Solidarity movement born in Gdansk’s huge shipyards was given widespread credit for its role in the collapse of the Soviet Union.

Now the restored Old Town in the north of the city is a beautiful place, with richly decorated facades, elaborate gable ends and historic religious buildings, such as St Mary’s, the world’s largest brick church.

The overall impression is you get more of what you’d expect from Belgium’s Bruges than the Eastern Bloc, but it’s less twee and a lot cheaper. And after an injection of funds ahead of being a host city for Euro 2012, it’s looking better than ever.

I begin my day with a mid-morning pirate galleon cruise (perlalew.pl), which takes in some of the city’s best views from the water.

The 90-minute trip only costs a fiver, and despite the pre-lunch hour, a few of my hardy shipmates are glugging £2 pints of beer as soon as we board.

Departing from near Gdansk’s famous wooden medieval crane, we head down river, away from the Old Town and towards the sea, passing the modern shipyard cranes and the famous Lenin Shipyards, which spread as far as you can see.

I make a mental note to visit there later, but the destination for now is the Westerplatte, a peninsula on the Baltic Sea. 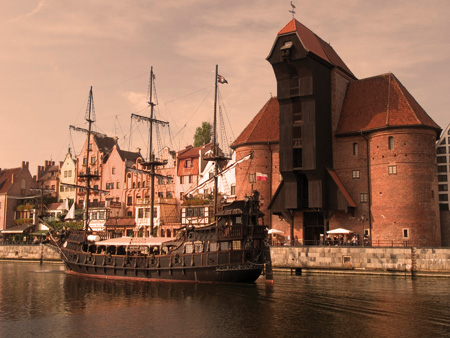 The preserved bunkers in this bleak area are where outmanned and outgunned Polish soldiers did their best to repel Nazi troops on September 1, 1939, starting the war.

That occupation was just the start for the Poles – when Hitler was beaten and the Nazis kicked out in 1945, Soviet forces under dictator Joseph Stalin took over their rule.

The country’s eventual liberation came led by a local electrician named Lech Walesa who formed the Solidarity group and led a mass strike at the Lenin Shipyards.

He would later win the Nobel Peace Prize and become Poland’s president. I am told this tale while trundling around the docks in a rickety 1984 Czech bus dubbed the ‘Cucumber’ as part of the Subjective Bus Line tour (wyspa.art.pl).

Our young guide, Michal, translates for a Polish shipyard worker, who he tells us worked here for more than 40 years. He saw the uprisings first hand and tells visitors the Solidarity story as we drive past Walesa’s workshop.

“Look at the glass, it’s frosted,” he says. “Workers walked past every day just to see him [Walesa] and the authorities did whatever they could to stop it. So people left flowers on the window ledge instead.” 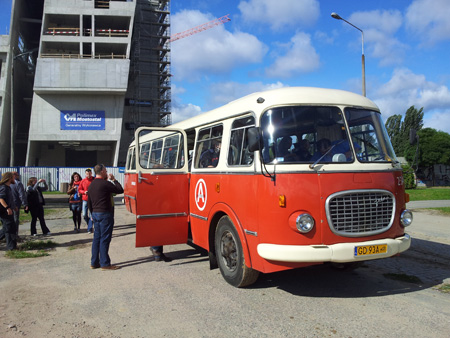 The bus tour is run by the Wyspa Institute of Art, which is tucked away inside the vast semi-wasteland of the shipyard.

It’s an unlikely, if edgy, setting for contemporary art and where you’ll also find Gdansk’s hippest club, Buffet (Doki 1, tel. +48 516846138), which attracts a discerning, artistic crowd – although its reign may be short-lived, with the Lenin Shipyards that surround it slated for redevelopment.

I return to the Old Town for a drink at Buddha Lounge, where the friendly staff are enjoying a boom following Euro 2012’s success, especially with an influx of Irish fans.

“They drank for 22 hours then rang home to tell all their friends to get over here, because it was much prettier than they expected,” the barman says. “We’ve had loads more tourists since then.”

My next stop is an inn called Notocyk for a late-night snack. This is one of the Old Town’s trendy yet ironically communist-themed hostelries.

Gdansk’s past may not hit a raw nerve any more, but the meat does, with traditional uncooked ‘tartar’ beef coming with a raw egg garnish. I hastily wash it down with an 80p vodka shot.

As I sit under an austere portrait of General Jaruzelski, Poland’s last communist-era dictator, I decide that it’s because it’s not as polished as Krakow that Gdansk has an unusual and unique charm of its own 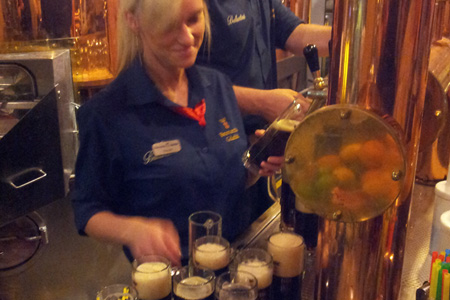 Budget: A no-frills Polish meal costs about £2 at Neptun. This is one of the few remaining communist-era ‘Milk Bars’  which used to be state-subsidised canteens.

Neptun is still a great place for a cheap feed, so is often full of backpackers as well as pensioners.

Midrange: On Sopot’s pier, with a great sea view, the ‘meat feast’ platter (including pork neck) in Restauracja Laguna Smaku serves five people for only £6 each.

Luxury: Microbrewery Brovarnia serves up fresh salmon with chive sauce on spinach for £9.80 in beer heaven.

Cosy and relaxed, it’s housed in the historical granary by the Motława river in Gdansk.

Midrange: A wide selection of local beers cost about £1.60 each in the casual Amsterdam Bar.

Luxury: Friendly staff, a late licence and cocktails for £3.35: lap it up at Buddha Lounge where trendy exposed brickwork and chic decor make it a hotspot for Gdansk’s smarter set.

Budget: Overlooking the river and by the main drag, dorm beds in the Old Town start at £5.90pppn at the Riverside Hostel (pictured above), which has a reputation for friendly, helpful staff.

Midrange: Plain, but this hotel does the job: the Novotel Centrum is central, functional and popular with coach groups. Double rooms from £43.50pn.

This upmarket spot has a renowned spa onsite, too, for when you really feel like treating yourself.

Ryanair flies direct from London Stansted to Gdansk from £50.99 return.

Vermeulen revs up for Phillip Island