Get wet and wild with Sydney’s adventure sports

Desperately gulping for oxygen as the raging water does its best to drag me under, I cling onto the rope like my life depends on it, every now and then launching a futile attempt to climb back into the raft, only to be thrown back, each time edging nearer to exhaustion. While it sounds like I’m doing my best impression of a drunk backpacker on Bondi Rescue, I’m actually whitewater rafting in Penrith, a western Sydney suburb an hour or so from the beach. Givent eh setting, on the outskirts of the city, on the way to the Blue Mountains, I’ll admit I’d expected the experience on this man-made circuit of manufactured rapids to be far from extreme. Oh, how wrong I was.

Having rafted for real on Queensland’s wet and wild Tully River, I’d presumed Penrith’s imitation of this adrenalin-pumping sport would be pretty tame. And so, still being drawn to the experience by the reasonable prices and the fact it can be done as an easy daytrip from Sydney, I was more intrigued than entrenched with fear as I made my way out of the city.

In hindsight, this was a pretty stupid opinion to have. After all, the site was built for the canoeing events of the Sydney Olympics in 2000 and, if you’ve ever seen a world-class kayaker, you’ll know they’re capable of some impressively daring, verging on suicidal, feats. So, if it was good enough for them, it was sure as hell going to be good enough for me.

First, however, I have another stop in Penrith to make, as it seems this western suburb is actually a little enclave of adventure water sports. The locals, apparently, aren’t best pleased about living inland and are doing something about it. So I make my way to Cables Wake Park where, on two man-made lakes, you can jump on a wakeboard and get dragged around by a motorised ski lift-like circuit.

Geared up with board, helmet and a few tips for beginners, it’s soon my turn to grab the handle and wait for the pull. Within a few seconds, the machine yanks into gear and I’m wrenched into the water. I’m boarding! And I’m down. After falling a few seconds into my ride, as soon as I hit the first corner, I then take the swim of shame back past the queue to wait for my next go.

Sadly, that pattern is then repeated a few more times until, with just one more go before my hour is up, something clicks and I get the knack, skidding over the water on my knees for almost a whole lap before finally being catapulted forwards when spectacularly misjudging a corner, right in front of the clubhouse. It’s a huge amount of fun, but with my muscles burning and no more time remaining, that’s my cue to make a move for the main event of the day. 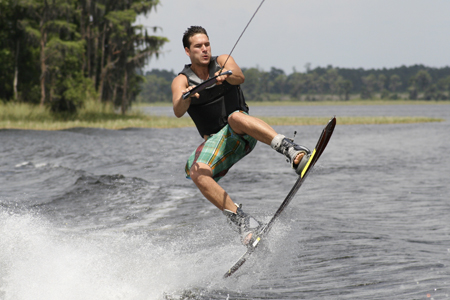 Coming up for air

Arriving at Penrith Whitewater Stadium, six of us are soon kitted up, given a quick tutorial and told to jump aboard our raft. Now, seeing as this is one quite small, winding circuit, rather than a lengthy, gradually descending river, they’ve ingeniously stuck a travelator in to link the end and start of the course, so that’s how we begin, sat aboard our giant inflatable, slowly chugging uphill. We quickly learn that this is the calm before the storm.

As soon as we reach the top, our descent gets under way. This time, however, we move a little faster. With me sat precariously at the front, our guide edges us off the first ledge and we’re away. While reacting desperately to demands like, “Paddle!”, “Back paddle!” or the more alarming, “Hold on!”, we tear through the thundering water, surging left, right, up and down as our instructor guides us expertly through the maze of whirlpools, sitting calmly at the back while we’re thrown around the raft.

Within a few minutes we’re back at the bottom, soaking wet, laughing and catching our breath as we ride the travelator back to the top for round two. And that’s how it continues for the next hour as we go round and round, our guide finding ever-more inventive ways to try and get us in the drink, until he decides on a change of tack. It’s time for some raft surfing.

Our paddles dumped by the side, we find ourselves in the middle of the course, where the water runs fastest. Suddenly, after some deft moves from our guide and some screams of, “Left!” and “Right!” that have us jumping around the inflatable, we’re stood up in the raft, which is now balancing vertically on its side, as the rapids rush at us. We’re surfing!

However, with the full power of the water now hitting our bodies straight on, it’s not long until we start disappearing from the raft. And soon enough it’s my turn. Losing my grip, I plunge into the water, controlling my panic as I’m swept under the boat until I pop up the other side, where I manage to grip the raft’s rope just before getting dragged away by the current. And so begins the exhausting effort of trying to climb back aboard the raft, only to each time have tonnes of rushing water effortlessly dump me back down. Every now and then I succeed in getting inside, as someone still onboard manages to haul me back in. But each time the result is the same – as we mount the lip of the surfing raft, we simply collapse over the other side again.

Luckily, help is at hand for whenever our strength fails us. Losing grip of the raft, a rope is flung in my direction from shore and I’m pulled to safety. There I’m given the chance to catch my breath before jumping in again upstream to begin the process all over again.

And this is the beauty of rafting at Penrith. While it may not seem as dangerous or unpredictable as being out in the wild, the controlled environment means the guides can pull plenty of insane stunts which would probably be too risky elsewhere. One thing’s for sure, as we eventually stagger back onto dry land, comparing our collections of grazes, bruises and ripped T-shirts, we’re grinning from ear-to-ear. 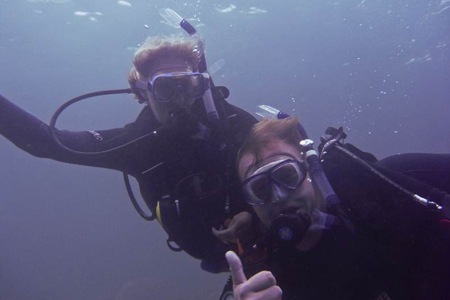 I always expected my first dive to be in a tropical paradise, sans-wetsuit. Unfortunately, it’s in a Sydney pool on a chilly autumn morning. My German instructor, Michael, hates me – I fail my theory exam, offer him a bribe and can’t get into my wetsuit. Downtrodden, I retake the exam, pass, and convince him I will need a bigger wetsuit. Germans don’t like to be proved wrong.

On day one of our two-day course, eight of us shiver in the pool as we learn everything from cleaning your mask (spit and wipe) to using someone else’s oxygen (a mixture of panic and using their alternative air source). When I say panic, I am aware that I am breaching the first rule of diving, and that is to stay calm. It takes me four hours of safety procedures and signals to feel confident enough to stay calm as I slip into the open water and explore my new world.

That afternoon, now fluent in underwater-speak, we head to Gordon’s Bay near Clovelly. We get kitted like up astronauts on a mission and head down to the protected cove. We drop down, releasing air from our buoyancy vests and kneel on the ocean floor. I’m grinning from ear-to-ear. I can hear myself breathing heavily through my regulator, but apart from that, it’s silent. I weightlessly loll around, watching blue gropers swim past me. After a few more safety tests we set off to explore the underwater nature trail. Visibility is clear as the sun pierces through the bay. My dive buddy, a giant on land, looks graceful as he performs somersaults in front of me. Keeping my eyes on the group, I effortlessly glide through the undersea world.

We see eccentric-looking cuttlefish and spiky urchins as we edge around the bay, reaching depths of 14 metres. After 40 minutes we ascend, excited, and a little bit relieved we didn’t run out of air. Speaking of relieved, the second rule of diving is not pissing in your wetsuit. No one took a toilet break that day. Guess we weren’t thirsty?

Walking back over sharp rocks, our feet are numb and our backs are aching from lugging the heavy equipment. Yet we’re all eager to do it again. We have two more dives the next day before we are qualified open water divers. And yes, I pass. Proving Michael wrong, once again.