A photo of a giant crocodile leaping from the Adelaide River in Australia has gone viral on the internet amid claims that the picture is a fake.

The image shows an enormous three-legged crocodile, named Brutus, jumping from the water as a tour guide dangles meat on a stick to amuse the tourists on board.

If the picture is genuine, crocodile Brutus is 18-feet long and weights two tonnes. 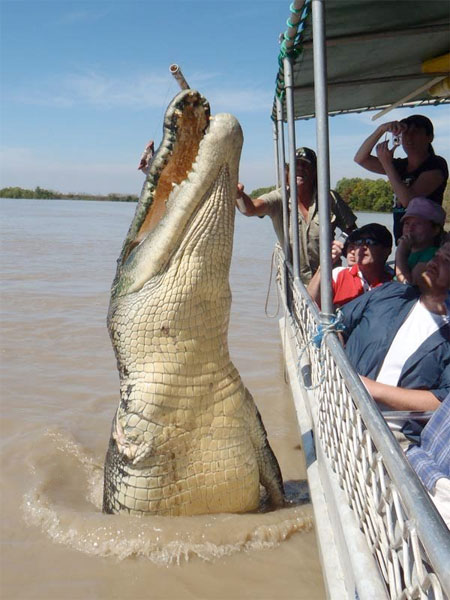 Brutus the giant crocodile leaps from the Adelaide River.

Both the sightseer who took the picture and the boat company claim that the monster crocodile and this photo are the real deal.

Brutus, who is apparently a popular tourist attraction on the Adelaide River, is 80- years old and lost his fourth leg during a fight with a shark in the river’s estuary.

The photo of the giant crocodile was taken by Australian Katrina Bridgeford.

“It got the adrenaline going,” she said. “It was so close you could almost touch it.”

“When it came up out of the water there were a lot of ‘Oos’ and ‘Ahs’,” said Bridgeford.

“I wasn't expecting anything like this. I couldn't believe how close it got to us. If you had put your hand out you would have been able to touch it – if you'd dared.”

Jumping crocodile cruises are a major tourist attraction in the Northern Territory of Australia.

Signs in tourist areas warn people not to swim or wash their vehicles in the water for fear of crocodile attacks.

Snowing Off: A Guide to the Oz Skifields