Glasgow sure know how to do Christmas with panache – from Santa races to drams of warming whisky, here’s our pick of the best.

Skate beneath the twinkling lights of George Square in Glasgow’s city centre, where a sizeable ice rink opens until December 30. Open seven days a week until 10pm, the rink only closes on Christmas Day.

Book skate sessions in advance (ticketsoup.com). Check out the free foot-stomping entertainment on the square from Wednesday to Sunday.

Every Wednesday from December 1 to 22 from 7-9pm, watch a slew of choir groups crooning Christmas carols, then vote for your favourite. On December 29, the winning choir will perform. Every Friday from December 3 to 17, from 6-9pm, shake your booty along to top-notch tribute acts, a must for fans of Stars In Their Eyes.

If you’d rather tap your toe to chilled-out jazz, George Square will play host the Glasgow Jazz Festival from December 15-19.

Wacky picture opportunities don’t come much better than the sight of thousands of Santas racing around Glasgow. Check out the Santa Dash at 9.30am on December 12, a 5km race which starts and finishes in George Square and raises thousands of pounds for charity.

If you’re a keen runner, take part by registering at glasgow.gov.uk/santadash. Once you register, you will be supplied with a fetching Santa suit. 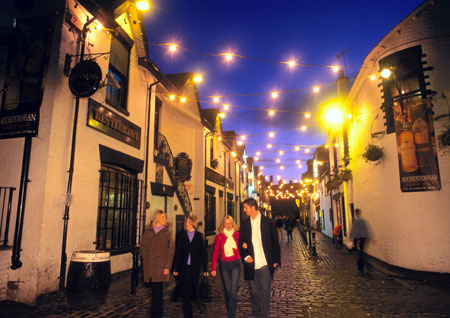 Deep-fried Mars bars were invented here but don’t let that put you off the city’s culinary scene. The wealth of great restaurants means you can eat very well here indeed.

Glasgow’s rich ethnic diversity means there are some fantastic curry houses such as Mother India and its sister restaurant, The Wee Curry Shop. The city also has a good range of Italian, Japanese and Chinese restaurants.

Contemporary Scottish cuisine rules here and there are scores of top restaurants at which to sample it. Meats such as venison, pheasant, lamb and beef are all on the menu. And, given its proximity to the West Coast, it’s no surprise Glasgow specialises in fish and seafood. Look out for langoustines, salmon, scallops  and mackerel.

Vegetarians are also well catered for, though it’ll be hard to find dedicated restaurants.

A dram of whiskey

Warm the cockles with a dram of whisky, famously brewed in Scotland. If you’re in need of a pick-me- up, order a hot toddy.

If boozing on the street is not for you, get glammed up and bring in the New Year at burlesque night Club Noir, at the Winchester Club. Tickets cost £15. Check out clubnoir.co.uk.

Alternatively, get down with the Mods at club night Friday Street at Blackfriars. Tickets cost £7 in advance. See myspace.com/fridaystreet.

Living on the London Underground – can you afford it?