The most expensive superyacht in the world – with 100 tons of gold plating – has just sold for a staggering £3 billion.

The 100ft British-designed yacht has gold covering over half its surfaces, platinum-covered bedrooms, a wall feature made from meteor stone and a statue made from Tyrannosaurus Rex bones.

The yacht is named The History Supreme and its hull is plated with gold. The rails, anchor deck and dining area are made from other precious metals. 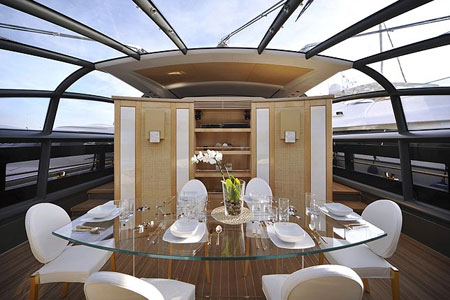 The dining area of the £3 billion gold yacht 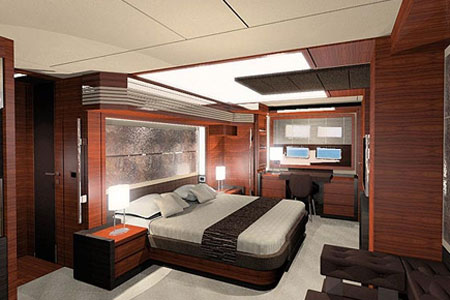 One of the bedrooms

Liverpool jeweller Stuart Hughes took three years to build the vessel, for a Malaysian businessman.He said: “It was the most mammoth task ever. I’ve covered all sorts of things in gold, but this has got to be my most ambitious project yet. This will never be topped.”

Hughes customises other goods such as iPads, and has made a £5 million diamond-wrapped iPhone for a customer.

He added: “The businessman just approached us and asked us whether we could do it. He wanted a plane doing as well, but the thing would never take off if we did.

“So he said, ‘Can you do the yacht?’ and I said, ‘We’ll give it a crack.” Then it was pretty much a case of can you make this gold, can you make that gold? We just did what we were told and are delighted with the result.”

The yacht was built in Italy and finished in Malaysia two weeks ago. Hughes said he believed it would stay in a dry dock and not be used, saying it was just for show.