Grafitti in London: The writing’s on the wall

The Grafitti movement, when it first emerged, was one of the four pillars of hip-hop. Along with breakdancing, MCing and DJing, it combined to form the artistic expression that sprung from the streets of Seventies’ New York to arrest the world’s attention and never really let go – hitting London
in the Eighties.
Today, along with street art – a newer phenomenon with a more commercial motive – graffiti is undergoing a renaissance, writes Jahn Vannisselroy.

But not everyone is a fan.

Keep Britain Tidy is calling for a zero-tolerance approach, insisting: ‘Graffiti is not art.’
And, as London mayor Boris Johnson strives to clean up London ahead of the Olympics, he’s launched a ‘Love Clean London’ app, with which graffiti can be reported and its clean-up progress tracked.

So, as the push for colour-free streets continues, TNT talks to the people behind the spray cans about how important artistic expression is on the streets. 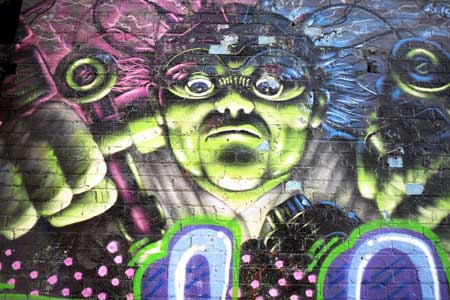 Wayne Anthony runs LSD (London Street-Art Design) Magazine. One of the acid house scene’s original members in the late Eighties, he says the renaissance of graffiti/street art is the most inclusive movement he’s seen.

“People see a Banksy and they all gather round to talk about it. They’re all from different classes, creeds, race and religions. When I first saw that, I realised this was something special,” he says.

Anthony calls urban art “one of the last true acts of freedom”, adding: “In a time when our rights and civil liberties are being eroded, there’s not many things left where you don’t need permission to do them. It’s one of the last places you’re going to get uncensored messages that aren’t trying to sell you anything.”

Ever the trendsetter, London attracts the best artists from around the world.
“Anyone who is worth their weight in paint is coming here,” Anthony says.

And what about the people behind the art? Are they all jobless vandals as the stereotype purports?
“These artists are really bright people,” Anthony says. “Many of them work across different mediums and different styles and have a strong voice and a message to convey. I’d say in many cases they’re smarter than the people judging them.”

East London-based graffiti artist Busk agrees. Involved in the London scene since its genesis in the Eighties, he has seen artists come and go, styles change and the internet widens the scope of its appeal.

“You’re basically redesigning a letter form. You need to be a graphic artist, an architect, a 3D modeller and you have to get your brain around all that,” he says. “It’s not easy.”

For Busk, the early days of rolling
with a graffiti crew were all about fun, danger, painting and breakdancing.
“It was a movement, an all-consuming lifestyle. You’d meet your mates at night, go out tagging. There was a whole camaraderie to it … and that camaraderie has still kept me going.

“We never really saw it as illegal. We weren’t thinking of going out and destroying people’s property.”
Busk came to grips with the illegality of the act after he was jailed for his art.
“It did take a couple goes,” he laughs at having been sent to prison twice.

Not only is there rivalry between the authorities and artists, but also between the graffiti and street artists, who are keen not to be bunched together.

Busk considers street art a watered-down version of graffiti but he is philosophical about its place on the streets.
“We’re all artists. For me it’s always been about longevity. I’ll always be an artist so whether I’m in fashion, or in the galleries or not, is never an issue.” 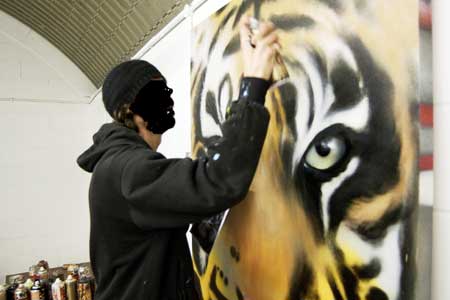 Rich Simmons is one of the new breed of urban artists. Younger and without the old school links to the street, he’s using his creativity to publicise his main passion – using art as a therapy.
While he agrees many street artists are only interested in furthering their own careers, using an urban canvas as a quick way to a gallery, he’s adamant he has
a genuine interest in helping others.

“I can use my art to benefit their lives through using art as a therapy. I can use the gallery shows and the money that I make now to boost Art Is The Cure , which runs workshops and offer my studio space to them to up-and-coming artists,” he says.

But it’s not all serious for Simmons, especially with his work on the street.
“I get to put my personality out there. I get to tell jokes, put across my sense of humour. It’s all about telling little stories through imagery. The English are a very prudish people. We don’t like controversy much. If I can change people’s perspective on how they see certain things then that’s where I get my kicks.”

See the best and learn from the best in London at these galleries and workshops:

The Brick Lane Gallery: While Brick Lane itself is a walking street art exhibition, this gallery showcases some of the best.