Stormtroopers converged on Old Street in London as part of a Greenpeace protest against Volkswagen’s apparent opposition of European environmental laws.

At 7am this morning, commuters were greeted by an army of Stormtroopers at the exits of Old Street's Silicon Roundabout as the Imperial March sounded. Protesting stormtroopers climbed the billboard above the roundabout to unfurl banners.

The Stromtroopers’ message was this: “All of us in the Rebellion are calling on Volkswagen to turn away from the Dark Side and give our planet a chance.” 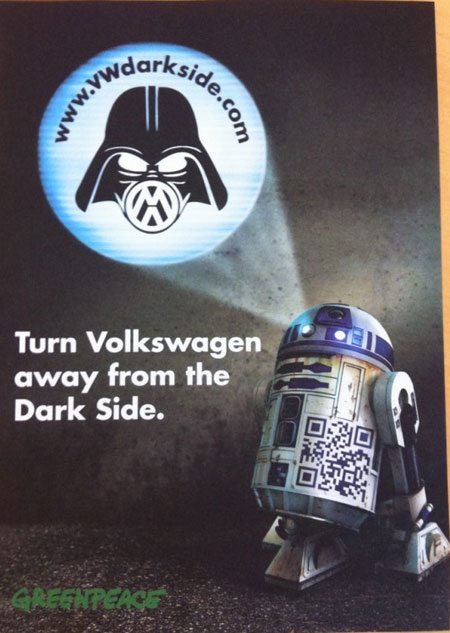 Here's the flyer the Greenpeace stormtroopers were handing out at Old Street this morning.

This, the Greenpeace stormtroopers suggest, can be done by supporting strong CO2 emissions cuts and fuel efficiency standards.

Greenpeace is also calling on Volkswagen to harness its technology for greener use.

Twitter has been showing its support for the Old Street stromtroopers.

“Loving @greenpeaceUK's work at Old Street this morning. @VW u really should listen to them & cut emissions with the rest!” said jimfreshhh.

While AndrewBloch wrote: “Greenpeace truly are masters of the PR stunt. Here's the flyer that stormtroopers are handing out on Old St today.”

Although some managed to get the wrong end of the stick.

“VW is doing a rather nice stunt in Old St at the moment… Stormtroopers everywhere!” tweeted manchipp.

Tyrannosaurus next: Scientists debate about which dinosaur had the tastiest meat