Grin and beer it: your essential guide to Oktoberfest, the world’s most-loved beer festival

But while glugging down the good stuff is undoubtedly a fundamental part of the festival, it’s also a brilliant chance to soak
up some traditional Bavarian hospitality and enjoy mixing with the locals.

And steins aside, it would be a crime to visit Munich and not see anything of the city. From river surfing to naked sunbathing, it’s easily one of Germany’s most exciting metropolises, and deserves to be explored.

Here, we give you everything you need to make your Oktoberfest a (at least partially) memorable one. Read on for what to expect in the beer tent, essential sights to see in Munich, and our top tips for making it through an entire booze-fuelled day.

Bring on the beer, by Inger Smith

A minor scuffle breaks out as a line of excited beer lovers senses the brew is near. Such a scene is commonplace in any pub any night of the week, but it’s only 8am in Munich. Already, the masses are congregating outside Oktoberfest’s Löwenbräu tent, ready for another day of solid drinking.

Inside, getting your bum on one of the sought-after wooden benches is the most essential step of procuring a stein – if you don’t, you won’t be served. Once you’ve found a seat, though, you’re sorted for the rest of the day and can focus on downing, singing and dancing.

Seated, my friends and I – dressed in traditional lederhosen and dirndls – are waited upon by buxom Bavarian barmaids. These ladies shuttle staggering amounts of beer-filled steins all day (the Guinness world record is 19). In comparison, my hands ache from grasping just my one-litre mug.

Beer is served from 9am on weekends and 10am on weekdays. It’s a tad earlier than I normally crack open my first drink of the day, but I’m caught up in the raucous atmosphere of the festival, this ‘Disneyland for drinkers’.

The 16-day event began innocently enough – when Crown Prince Ludwig married Princess Therese of Bavaria on October 12,1810, the people of Munich thought it only appropriate to party.

A festival has run annually since, morphing from a stint as an agricultural show to a super-sized celebration of Bavarian beer. 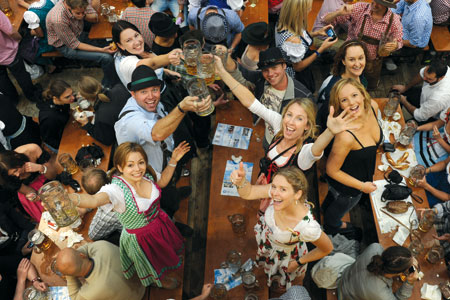 The party officially kicks off at noon on the festival’s first day, when Munich’s lord mayor taps a keg of beer and cries: “O’ zapft is”, or, “It’s tapped”. Only then can visitors quench their thirst.

Each tent has its own character, from the funky celebrity-packed Hippodrom and the youthful Löwenbräu, to the displays of yodelling in the Braeurosl and traditional roasting oxen in the Ochsenbraterei.

We opt for the Löwenbräu and, by noon, my husband is slumped against a table. Well, he did knock back the beers
a little faster than everyone else. What he should have known is this is marathon drinking, not a sprint.

After a powernap, he catches a second wind and knocks back another four steins, the equivalent of what I drink in one day. Although we attempt to explore all of this mammoth festival – aiming to visit each of the 14 beer `halls, festival houses and Schnapps stalls – the absence of a Bavarian-standard liver means we fail miserably.

However, it’s not only the amber brew tempting today’s Oktoberfest visitors. The tents are surrounded by a large fairground with rides – rollercoasters, bumper cars, carousels and games means there’s plenty of entertainment.

In fact, not only will you be entertained, this will most likely be the biggest – and best – party you’ll ever attend.
So put on your drinking boots (along with a pair of lederhosen or a dirndl), and let the fun begin. Prost! 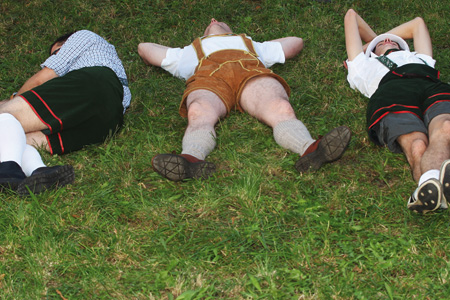 The capital of the state of Bavaria and Germany’s third-largest city, Munich has battled more than its fair share of adversity to become the fun-loving locale it is today.

Today, the only major structures to survive the Allied bombing are the Glockenspiel and the twin domed towers of Munich’s famous cathedral.

However, despite many of the city’s buildings clocking in at less than 60 years old, many have retained pre-war architecture: the Nazis took steps to record the streetscapes and facades of the city, knowing it would be a target for aerial assaults.

As well as retaining its looks, the city has held on to the Bavarian tradition of having a damned good time. Here’s
our pick of the best of Munich. Take it in on a beer break. 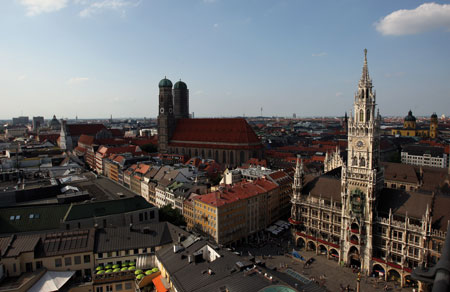 River surfing: Packs of wetsuit-clad dudes toting boards may seem a strange sight in a land-locked metropolis. However, Munich is home to one of Europe’s most notorious surf spots, more specifically a gnarly wave on a manmade river in the city’s Englischer Garten (or English Garden).

The Eisbach – German for ‘ice brook’ – has attracted river surfers since the early Seventies, but riding the 1m-high wave only became legal in 2010. It’s not for novices, though; signs warn the wave is for skilled surfers only – people have drowned while swimming in the river, courtesy of its forceful current.

If you’re not quite ready to queue up with the pros (the spot is always a busy one and you’ll often see lines of surfers waiting their turn), you’ll enjoy some great spectating.

The English Garden is also worth a visit in its own right – the grassy sprawl is bigger than both Hyde and Central parks, and makes a particularly pleasant place to picnic to the sound of street musicians. Keep an eye out for the fields of naked sunbathers. 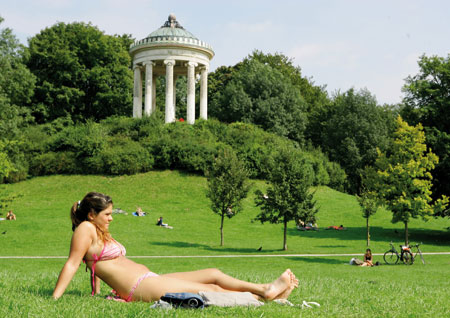 Olympic Park: The Munich Olympics in 1972 are forever synonymous with the so-called ‘Munich Massacre’, when athletes from the Israeli Olympic team were abducted from the Olympic village, held hostage and subsequently murdered by members of Palestinian terror group Black September Organisation.

Today, the Olympic Park has transcended its dark past to become a popular public venue, hosting major concerts and sporting events.

Perhaps its most impressive feature is the 290m-high Olympic Tower, the top of which you can reach via a lift. Here, soak up a panorama of Munich, and a series of signs guides you to the finer points of the city’s skyline.

If that’s not quite thrilling enough, why not take a stroll on the Olympic Stadium’s roof?

An impressive ‘tented’ cover, constructed from steel and plexiglass, allows you to roam over the top while hooked up to a steel cable. It’ll give you a whole different perspective, but is best avoided by the vertigo-prone. From about £30.

Sightseeing: Most people might spend their time in Munich inside a beer hall, but there are plenty of sights to stumble around if you care for fresh air.

One of the most popular is the Rathaus-Glockenspiel, essentially a giant cuckoo-clock on the town hall that enacts stories from Munich’s 16th-century history, with the help of 43 bells and 32 life-size figures.

The Frauenkirche – or Cathedral of Our Dear Lady – is Munich’s spiritual masterpiece, an imposing church said to house the devil’s footprint. 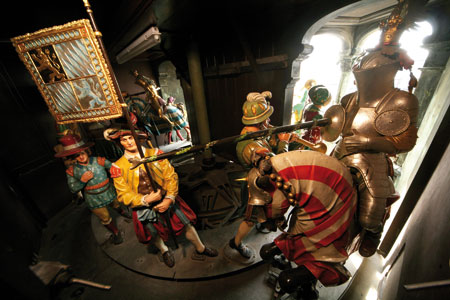 Leopoldstrasse is the place to head for people watching. This once-bohemian area has now gentrified into a catwalk for Munich’s most glamorous residents. Take a beer at an outside table and watch this wonderful world go by – just try not to drool.

The world’s largest museum dedicated to technology and science, the Deutsches Museum, on a small island in the Isar river, displays an intimidating 28,000 items for your perusal. There are few inventions that have escaped the halls of this comprehensive collection.

Especially awesome-in-a-geeky-way attractions include mini models and a demonstration in which a volunteer is zapped with a bolt of lightning.

Who said science was boring? 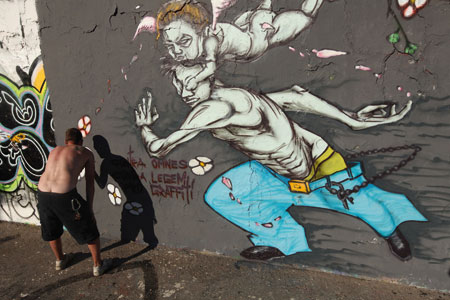 An easy day trip from Munich, Germany’s ‘fairytale castle’ is widely held to be the inspiration behind Disney’s signature fantasy fortress. Built by ‘Mad King Ludwig’ in the 19th century, and overlooking a misty-eye-inspiring spread of Alpine valleys, it’s one of Europe’s most iconic sights, reeling in 1.3m tourists a year.

To really get into the spirit of things, take a horse and cart up the steep road that leads to the castle high in the hills. Keep an eye out for the fort’s myriad swan motifs – Ludwig was obsessed with the regal bird from childhood, and the castle’s very name translates to ‘new swan stone’.

Best of the rest: Germany’s must-sees

This world-class city marries a disturbing history with a vital present, and no visit to the hip heart of Europe is complete without a generous serving of both.

Feel the Cold War chill at Checkpoint Charlie and check out contemporary art on the Berlin Wall (known as the East Side Gallery); then don your skinny jeans for the artbars of Kreuzberg and do your darndest to get into ‘the world’s best club’, Berghain. 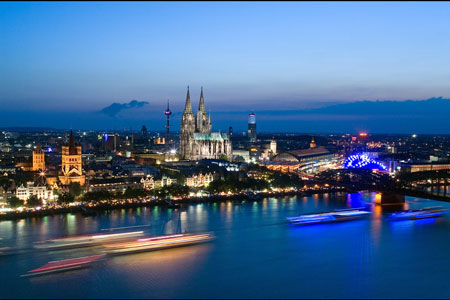 Most famous for its beer-soaked carnival in November, Cologne makes a great weekend getaway. Find your culture fix at the ghostly twin-spired cathedral (said to house the bones of the Three Kings from the Bible) and by browsing the postmodern art at Ludwig Museum.

Come nightfall, rack up the local Kölsch at the city’s myriad beer halls and end up in the dive bars of student district Luxemberger Strase.

A city of light and dark, Hamburg is best known for its Red Light District, in which The Beatles got their start (playing gigs, that is). Today, there’s still plenty of sleaze, but the gorgeous Alster Lake and pretty waterside cycling paths offer up some clean living, too.

When to go: This year Oktoberfest is on from September 22 until October 7.

Accommodation: Room prices skyrocket over Oktoberfest, so you’ll be lucky to get a bed in a dorm for £20pn. It is possible, however, to do just that at clean and friendly Jugendherberge Possenhofen.

Getting there: Direct flights from London Luton to Munich start from about £143 return with Monarch.
monarch.co.uk

Outside the Forbidden City in Beijing

Other traveller reviews on Switzerland