Healthy eating and detoxing in London

Is a detox and healty eating plan at the top of your list of New Year’s resolutions? It doesn’t have to mean locking yourself away with just tofu and a steamer for company. There a host of restaurants, and an army of experts, on hand to help us banish bad habits and shape up proper. Read

on to learn how to put the festive excesses behind you and still be a social butterfly.

First things first, get rid of any Christmas leftovers, such as the last of the chocolates or mince pies hiding in the cupboard, or your weekly calorie count will resemble the mileage of a second-hand car.

“Give your leftovers to the dog. We treat our bodies like garbage disposal units when we really should nourish it with good, healthy food. You function

so much better for it,” she says.

Ravenshear suggests starting a healthy eating campaign with some affirmations.

“Write down all the reasons why you want to lose weight, such as feeling better and looking great,” she explains.

“Then write down why you enjoy eating unhealthy food and you’ll quickly see which makes the stronger argument.“

Step one of eating out and being healthy is to avoid reaching for the bread basket.

White bread especially is a simple carbohydrate that our bodies break down into sugar, which is stored as fat.

Instead, nibble on olives or crudites or start with a green salad with avocado.

Soups, as long as they are not cream-based or include potatoes, are packed with vegetables and are also ideal.

Ravenshear says: ”Green vegetables supply magnesium, levels of which fall when we are under stress, and they are also low-carb so kind to the waistline.” 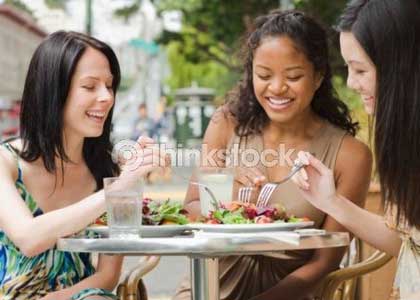 London is a melting pot of cuisines, but some will be far more conducive to your healthy eating plan than others.

Lean towards Italian, says Ravenshear: “A lot of restaurants bring food in from Italy and you can taste the sunshine in it.

“It’s delicious food. My favourite restaurant is Riccardo’s in Chelsea. It has really fresh ingredients and no hidden stuff so you know exactly what you are getting.

“Avoid pasta and pizza. Italians do delicious lamb chops with spinach, but many people overlook that.”

Japanese food, with its longevity-promoting miso soups and protein-rich fish is also a smart option.

You can eat Japanese and do a good deed at London’s Nobu restaurants which are offering all the green tea you can drink for £1, with all money raised donated to the Kids’ Company charity.

Celebrity personal trainer, Matt Roberts, says diners should only use soy sauce to dip raw fish into. “Rice is quicker to soak it up, which drowns out the taste and increases salt intake,” he says.

Despite what you may think, it’s not the creamy coconut milk in Thai dishes that make you fat, but the sugar in its sauces, says Ravenshear, adding: “Coconut oil actually increases your metabolic rate, so helps you burn fat.”

January is usually the month where we try to kick the booze.

But, if you still want the odd tipple, opt for a dry white or red wine for fewer calories.

Ravenshear says: “Avoid Sambucca and limoncello. They are absolutely packed with sugar, so maybe have it instead of dessert, but certainly not with it.”

Steer clear of beer, but go for a vodka and soda if you are not a wine drinker.

And, drink more water to flush out the toxins – but not while eating. It dilutes the acids and enzymes in your stomach that are needed for digestion.

Get yourself a plate of health at these London restaurants

Celebrity trainer Matt Roberts has teamed up with Sumosan in Mayfair to devise a menu that balances proteins, carbohydrates and vegetables for optimum health and another less than 400 calories.

Sanderson Hotel’s Agua Spa has a series of menus for January which promote anti-ageing, boost radiance, purify, detox or uplift, alongside smoothies to reduce cellulite.

up a vegan Sunday roast. 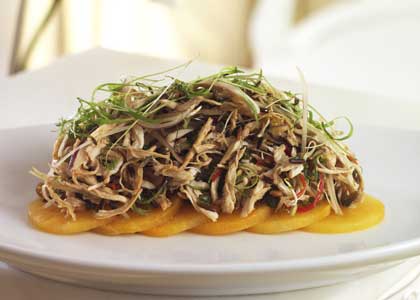