A video called ‘High five for first kiss’, showing two children sharing a first kiss, has sparked a mixture of outrage and sentimentality after going viral on Youtube. Some commentators have suggested that the video is inappropriate and verges on paedophilia.

In ‘High five for first kiss’ youngsters Elliot and Bowie are seen giggling and flirting before going in for the kill with a kiss on the lips.

“I kissed you cos I like you, you kissed me cos you like me,” the boy says before kissing the girl on the lips.

After the kiss, both children shout triumphantly to watching friends and the little girl, Bowie, high fives Elliot.

The video ends with an adult’s voice saying “no more”.

High five for first kiss’ has been watched more than three million times on Youtube after being posted on May 4. The clip received a popularity boost after Justin Bieber tweeted it to his nine million plus fans on Friday.

According the video’s Youtube blurb, Bowie is “literally the girl next door” and, no, “the children are NOT related.”

However neither of these facts – nor the slightly nauseating intro, which reads “Do you remember how you felt when you had your first kiss? This was captured by accident, in its most innocent form. If only it could be this way every time.” – has prevented a slew of criticism. 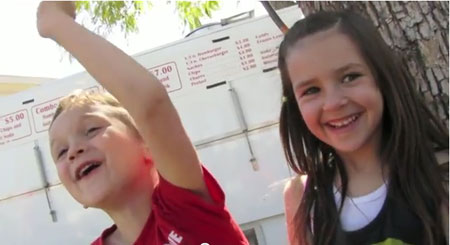 “Bet that chick is going to be a top class whore in high school,” Nish2280 comments.

However other watchers defended the video for its “ahh” factor.

Watch the video and tell us if it makes you want to barf or laugh.

Mariah to tour Oz in November

Escape the crowds in Abruzzo, Italy