Hillsborough disaster remembered around the globe

Today is the 22nd anniversary of the Hillsborough disaster and the implications of the disaster are still felt by football fans. Around the globe, Hillsborough is being remembered.

Thousands of people are expected to attend a memorial service at Anfield to mark the tragedy.

The scenes seared themselves immediately into the collective consciousness of the British public, particularly those with an interest in football. On April 15, 1989, Liverpool were playing Nottingham Forest in the FA Cup semi-final at Hillsborough stadium.

Minutes after kick-off, Liverpool supporters behind the goals began breaking through the barricade and pouring on to the pitch. Liverpool captain Alan Hansen approached an invader and told him to get off, because the club would get in trouble. Hansen, now a BBC commentator, recalls: ”He looked me right in the eye and said, ‘There’s people dying in there, Alan’.”

That day, 96 Liverpool fans lost their lives in the crush at Hillsborough. 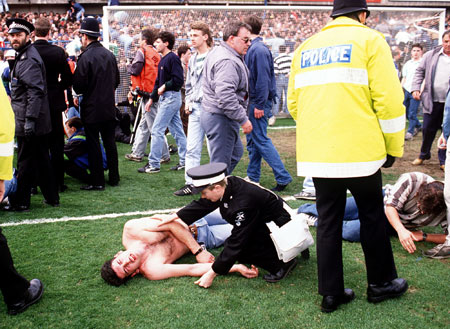 Injured fans lie on the pitch after breaking through the barriers.

Before kick-off, a bottleneck had formed outside the stadium as late-arriving fans tried to gain entry. A side gate was opened to relieve the congestion, resulting in thousands of fans rushing into the Hillsborough stadium – instead of being directed to less full sections of the ground, fans hurtled down a tunnel into an area already exceeding its capacity.

The images of the ensuing crush are truly nightmarish, with many of the victims asphyxiated on their feet. Some fans were hauled upwards to safety by supporters in the terrace above them, while others tore holes in fences to escape.

Eventually, though, the barriers broke and supporters spilled on to the ground. Fans ripped down advertising hoardings to use as stretchers but a police cordon set up to prevent rival supporters from clashing refused to let people through, meaning waiting ambulances could not be utilised. 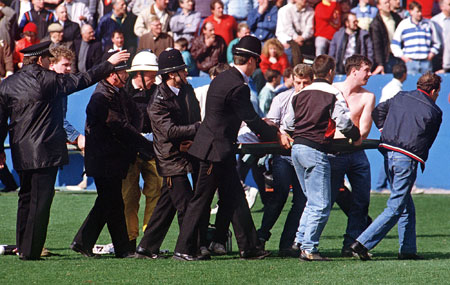 Fans help carry out those who were injured in the crush at Hillsborough.

No one has been prosecuted over the horrendous mismanagement that led to the Hillsborough disaster. Survivors and families of those killed blamed police inaction or, at least, the failure of officers to direct crowds away from sections already full.

One knock-on effect, though, is the removal of fencing, or pens, at grounds, as well as the conversion to all-seater stadiums.

Journalist Peter Sands worked on The Northern Echo at the time of Hillsborough and recalls his paper’s coverage on the disaster.

“The picture that came through for us was the picture of fans being crushed and it was the moment of death for some of the young people,” he says. “We published under the heading ‘never forget’ and received an awful lot of complaints – some people said it was too raw.”

“But the consequence of Hillsborough was that it cleaned up football. After that, nobody will ever fence people in.” 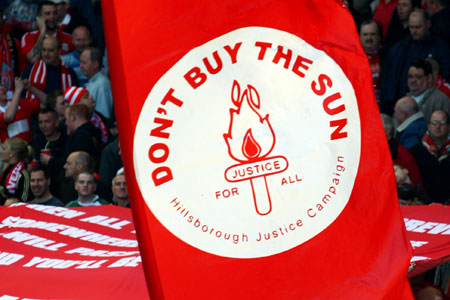 The Sun newspaper was boycotted in Liverpool for its coverage for the Hillsborough disaster.

Today in Liverpool, some newsagents refuse to stock The Sun. Its Merseyside circulation figures remain poor and the club’s website refuses to publish its articles. Some Liverpudlians refer to it simply as The Scum.

The hostility stems from The Sun’s coverage of the Hillsborough tragedy – on its front page, under the headline, ‘The Truth’, the paper accused Liverpool fans of urinating on police and stealing from the dead.

“It was particularly raw and harrowing, coming as it had on the back of other football tragedies at Heysel and Bradford,” Sands says.

“If you’re working on a paper in Liverpool, then you have an interest in keeping that story going – people do make mistakes and it was a long time ago.”

The Merseyside boycott continues today, despite The Sun issuing an
apology in 2004. Kelvin Mackenzie, the editor responsible for the
coverage, remains unrepentant.

There is no more talismanic figure at Liverpool than Steven Gerrard. It would be overstating it to suggest his standing at Anfield stems from his personal involvement with the Hillsborough disaster, but it seems likely the death of his 10-year-old cousin, when Gerrard himself was 8, shaped his connection to the club.

“It drove me on to become the player I am today,” he has said.

“As a football club we’ve stuck together since that day. We’re not just about what happens on the pitch, we’re all together off the pitch as well.”

Hillsborough is trending globally on Twitter today as people pay their respects to those who lost their lives. For a look at which countries are tweeting about Hillsborough, have a look at this map.

Will SMEs really suffer after a Brexit deal is agreed?

The evening I fall in love