There’s no denying that the Algarve has the finest coastal scenery in Portugal and possibly some of the most spectacular in all of Europe, but I’ve yet to visit the Algarve without bumping into someone I know, and since I live a relatively low key existence I think it’s fair to say that the area might have become somewhat commercialised.

So when I think of beach holidays in the real Portugal I think of only one place, the Targus Riviera. Here are five reasons I think you should choose the Lisbon coast as your next beach holiday in Portugal.

Rugged beaches
Prai de Guincho (Guincho Beach), sits at the far end of the Targus Riviera, a mere thirty kilometres or so from one of western Europe’s most beautiful capitals, but you could be forgiven for thinking you are in a wilderness at the end of the world. Even on hot summer days you’ll find that this beautiful stretch of sand is used by a mere handful of surfers and dog walkers.

Surf beaches
Portugal is easily one of Europe’s finest destinations for surfers and windsurfers. With over a thousand miles of coastline, most of which faces the Atlantic, this relatively small nation has an abundance of surf spots, and the Lisbon area is no exception. If you’re looking for a relatively un-crowded beach break then Praia do Guincho (see above) is one of the best spots in the area, though conditions are not for beginners. The Costa da Caparica coastline along the southern side of the Tagus River also offers great surfing and a more developed bar scene than the relatively undeveloped Guincho.

UNESCO beaches
Okay, so the beach hasn’t been granted UNESCO status but the mountain town of Sintra has, and riding the historic 1930’s tram from one of the most stunning towns in Europe to the beach town of Praia das Maçãs below is an absolute delight. Be sure to arrive early in Sintra because you’ll want to enjoy the town as well as the beach, but also with a location as stunning as this, high in the Serra de Sintra and with views of the national park, the Atlantic and the extrovert palaces spread across the mountain you’re never going to keep day trippers at bay. That does not distract from the experience though and it’s possible to climb through pine scented forests from the centre of Sintra to the Moorish castle above without seeing a soul on the way up. Then take a Tuk-Tuk down again in a fraction of the time it took to get up there. 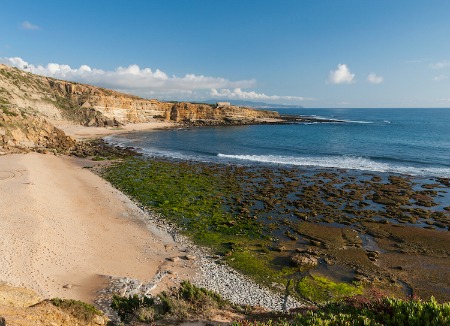 A free city break
It would be rude not to visit Lisbon in-between beach days and you’ll not be disappointed. This is an odd city, but a beautiful one nonetheless, and full of life. It feels almost Californian one moment, South American the next- a contrast most keenly noticed on the waterfront, where the Golden Gate’s sister bridge stretches out toward a Rio-esque statue of Christ the King, watching out across the city. Being built on seven lofty hills it’s hardly surprising that transport in the relatively compact centre focuses on saving the calves of visitors and locals alike. Wooden trams rumble up and down the narrow streets while Asian style Tuk-Tuks gather at strategic positions to ferry weary tourists to their next photo stop among the terracotta rooftop, most unique of all is the wonderfully ornate 1902 Santa Justa elevator which is so popular that it can often have queues around the block to ride up it.

Suburban beaches
But enough of this culture business right? You’re here to enjoy yourself on the beach, and where better to start than Estoril or  Cascais, which are the first ports of call for young Lisbonistas looking to cool off and get some sand between their toes. They are both connected directly to the city by metro and are more than just suburbs of Lisbon, but destinations in their own right. The towns have been coastal retreats for high society since the 19th Century so have a grander feel than modern resorts throughout Europe. One beach in Cascais is pretty much the back garden of a stately home! And since Lisbon is officially the sunniest capital in Europe there’s a great chance that you’ll manage to hit the beach in all but the coldest winter months.

Where to stay
Guincho is relatively undeveloped but has one of the best beaches in Lisbon for surfing. It’s only a twenty minute drive from Sintra and a thirty minute drive from Lisbon. Cascais is just five kilometres down the road. Eurocamp have a campsite nestled in the sand dunes behind the beach and offer three bed mobile homes in June from just £64 per night. The site has a pool as well as tennis courts, while the mobile homes come fully equipped for self catering, including the all important barbeque. Surf hire and lessons can be arranged on site or down at the surf school on the eastern edge of the beach.

Tennis: Isner and Mahut to clash in first round of Wimbledon