Kipling himself travelled widely in India in the late 19th century, and many of his old haunts are still there.

Bombay (now Mumbai) was the beating heart of colonial India, commercially speaking, and this vast metropolis was Kipling’s birthplace. British Airways has return flights direct from London to Mumbai from £412, or you can make Mumbai your stop-over on a long-haul flight to Australia or Southeast Asia. Mumbai is, of course, the home of the Bollywood film industry, with its glamorous stars and raucous song and dance numbers, but if you fancy something a little more sedate, there’s plenty of impressive colonial architecture to see during a walk around Mumbai Harbour, including the vast, UNESCO-listed Chhatrapati Shivaji Terminus (the city’s main railway station), the Gateway of India, and the Rajabai Clock Tower, which was theoretically modelled on Big Ben but wouldn’t look out of place in Venice.

Train rides in India are an unbeatable, authentic experience which allows you to survey all aspects of life from the comfort of your carriage. Take the train from Mumbai to Katni, the stopping-off point for the Bandhavgarh National Park, once the private hunting grounds of the Maharaja of Mewar. It’s richly stocked with 30 species of mammal and 240 different kinds of birds, all of which thrive in the mixture of grassy swamps and forested valleys. Today the only hunters, thankfully, are the tigers: there are currently 40 in the park, and the population is steady. If you’ve got the budget for a little luxury, stay in a cottage at the Tiger Den Resort, inside the park itself, and make use of the early morning game drives by open top jeep, and the keen eyes and encyclopaedic knowledge of Jagat Narain Chaturvedi, Tiger Den’s resident naturalist. He’s made appearances on both National Geographic and Discovery Channel, and has written the most comprehensive checklist of the birds of Bandhavgarh. 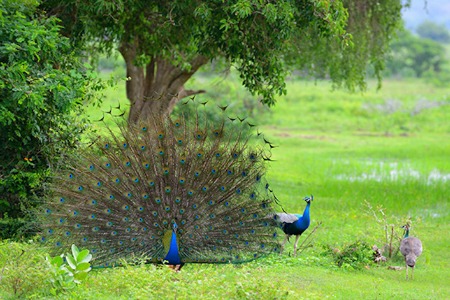 From Bandhavgarh, drive on to the Kanha Tiger Reserve, a pristine wilderness in the Maikal Range, a stretch of the central Indian highlands. There are 43 species of mammals here, as well as nearly 300 species of birds, and you can expect to see leopards and wild dogs, hyena and jackals, porcupines, mongoose, storks and teals, and herons. Keep your eyes peeled for cobras, wolf snakes, and Indian pythons sunning themselves on rocks, or slithering across the pathways. 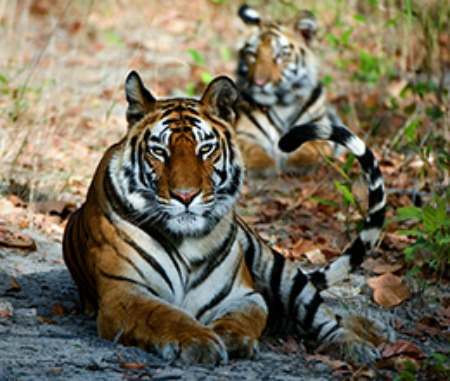 And then, of course, there are the tigers: Kanha is a key part of Project Tiger, India’s 40+ year old research and conservation programme. Whether you choose to stay at the British-run Kipling Camp, where Mark Shand’s elephant heroine of Travels on My Elephant is living out her retirement; or at Tuli Tiger Camp on the bank of the Banjar River, Sher Khan and his brethren will only ever be a short prowl away. Both camps offer jungle safaris, and you can explore the reserve on the back of an elephant, or by jeep. The likelihood of seeing a tiger here is higher than elsewhere in India, and if you’re lucky the leopards will put in an appearance too.