“We get lots of real stressed-out types here,” says Mac McKenny, a silver-haired John Wayne type – same walk, same handsome chiselled looks, with a charismatic glint to match – who has been running the sublime Homeplace Ranch for more than 40 years. “Real city slickers. They turn up burnt out, uptight and unsmiling. But, by the end of the first day, they’re grinning from ear to ear, at peace with the world, a bit saddle-sore, but much happier with life and themselves. It’s good to watch.”

It might be 6am, but here at Homeplace, a working horse and guest ranch in Alberta, Canada’s high cattle country – 31 miles southwest of Calgary – the early hour doesn’t seem so bad. After all, the area was called ‘Paradise’ by the native Indians, before wagons brought new settlers to the untamed land in the mid-1800s. Here in the foothills of the Rocky Mountains, at an elevation of 4900 feet, the air is that bit fresher, the colours somehow sharper – Brokeback Mountain was filmed in Alberta, so imagine the movie’s sweeping vistas and you’re almost there. 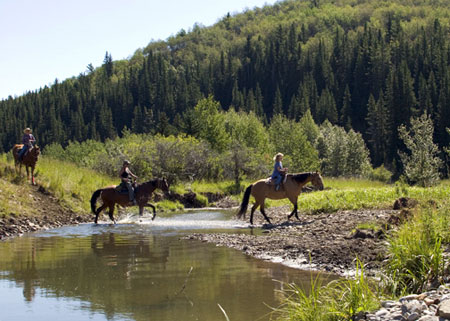 Looking out of my cabin window, I watch the horses, perhaps 20 of them, slowly walking out through the forest trees and into the fields, the Rockies an unparalleled dramatic backdrop. Each animal walks in silence, as though drawn by invisible threads to the ranch house where the wranglers have started preparing the saddles for the day.

Once zipped into my fleece – one made in Canada, because they understand cold in this country – I take a walk around the ranch with Mac. After starting out as a successful advertising executive, Mac turned his back on the rat race and bought the ranch. He continues to ride and lead groups even though he is now in his seventies.

“I prefer the company of horses to people sometimes,” he says as we groom a horse called Dave. “At least you know why they bite you.”

The simple life in his own private idyll has given Mac plenty of time to philosophise. “The secret to happiness is to have something to do, have someone to love and have something to look forward to,” he says. And he’s keen to share the knowledge: a plaque on the stable door is engraved with this piece of wisdom.

It’s not just the guests who have found peace in Mac’s slice of paradise. Jane, a ranch staff member who cleans rooms and helps with meals, was an accountant in London as recently as last year. “I got fed up of London,” she tells me. “I would have £100 in my pocket on Saturday morning and by midday it had gone, and I didn’t know what I’d spent it on. Here, money has little meaning. It’s all about the quality of life, and I had none at home.” 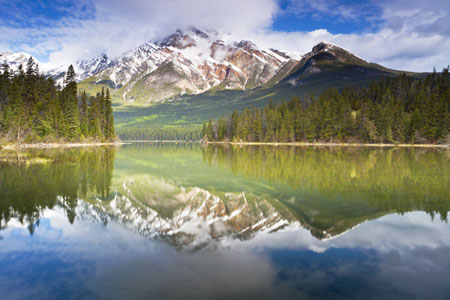 Ed and Mike, the wranglers who care for the horses, are both ex-London bankers.

“I wouldn’t go back there for all the money in the world,” says Mike, who used to work at Deutsche Bank.

Together with being the perfect escape from the frenetic pace of big-city life, Homeplace is also a great place to start for those who have always fancied riding through rolling hills, but have little experience with horses.

I meet up with a group of five others, all ages, all abilities, who tuck into the homemade fry-up of eggs, bacon and beans before the day’s ride. We’ve all been tested for our abilities on a horse in advance – there’s a wooden horse in the yard that Mac nicknames Woody, and he and his wranglers watch how each one of us gets on and off.  “We can tell what you can do by how you sit,” he explains.

Mac also has a list of dos and don’ts to make sure the horses are handled with care. “Don’t shout round the horses, they will kick and bite. Don’t go straight up to a horse and pat it on the nose, approach it gently from the side and talk softly. Always be aware in what order your horse should go in on the trail. They know where they should go, but do you? If you don’t and try to lead when you shouldn’t, chaos will break loose. Horses know their place.”

He chooses a horse called Favour for me. She’s a strong beast, but will do as she’s told, if she is told in a strong voice. Favour also has no stirrups, so the only thing that keeps the saddle on is my gripping like crazy with my thighs.

Things go well to start. Favour does me a favour by not being nervous, jittery or aggressive, and I’m completely overwhelmed by the beauty of the surroundings, spotting wild deer, hawks and falcons hovering overhead. It goes some way towards taking the edge off the ever-present threat of grizzly bears that wander the forests around the ranch, and have been known to get into the kitchen and raid the larder.

Of course, I forget to grip and gradually, ever so slowly, I slide down the side of Favour – as if I will just keep going and do the complete circle, coming up the other side. The horse stops, and could have kicked and killed me, but as Mac says: “She’s a good horse. She realises she’s more clever than you are.” Thanks, Mac.

Evening suppers around a campfire are legendary on ranches, and those at another ranch, Red Deer, are said to be the best. Just an hour and a half’s drive from Calgary airport, the enigmatic Jason Bradley manages the working cattle there, and guests can get involved with the ranch or just enjoy the scenery – although most want to muck in.

The ranch advocates slow cooking: the art of putting time into a meal and savouring each mouthful, which means cooking Red Deer ranch-reared beef in the ground for hours on end. When you dig it up – as I did – tear off the newspaper and foil and open the parcel, the smell is heavenly. The meat slides off the bone and melts in the mouth. I would almost defy a vegetarian to say no – I had never eaten beef until that moment. Without a doubt, it is the best meal I have ever had in all my travels, in all my life.

An evening around the fire brings out all kinds of conversation: Bradley tells us why calves need to be branded and castrated – he allows visitors to take part in it if they so wish – we sing songs and stare into the flames, and listen to stories about the bears that got away.

As for the real cowboy and Indian legends, you will no doubt hear many campfire tales of brave cowboys, brave Indians and even braver horses. While the Canadians are extremely proud of the fact that they didn’t treat their First Nations – the Aboriginals of Canada – as badly as their American neighbours, in my opinion, it’s a close-run thing. Tribes were turned out of their homes, moved to reservations where they could not hunt or fish, and into wooden homes where they burnt the floorboards for firewood because they didn’t see what the floorboards were ‘for’.

Look into the stories of how they were treated, their culture all but obliterated by the English who thought their way of life was superior to that of people who had lived here for generations, and it will make you weep. It’s ironic how the natives’ philosophy – that the land is not anyone’s to own, and the need for living close to nature and appreciating its importance and natural medicine – has finally come home to us. It seems the First Nations knew the best way to live all along.

Need convincing? Take a break from your own rat race and find out for yourself. You won’t regret it.

GETTING THERE:  Fly direct from London to Calgary with Air Canada from £580 return (aircanda.com). Indirect flights with British Airways start from £367 (britishairways.com). Indirect flights with American Airlines start at £323 (americanairlines.co.uk).
WHEN TO GO: Frost can arrive as early as mid-September, but snow doesn’t set in until November. The sun shines all year round, so bring eyewear whatever the season.
CURRENCY: Canadian dollar. 1 GBP = 1.6 CAD.
ACCOMMODATION: Three nights at Homeplace Ranch (homeplaceranch.com) will set you back £544 per person. Six nights costs £946. Get a free day’s stay if your birthday or anniversary falls during your time at Homeplace. Cabins at Red Deer (reddeerriverranches.com) start at £188pp for two nights.
SEE: visitcalgary.com

Student protesters take to the streets in their thousands