There are reports of a heavy police presence at Tottenham Court Road, where office buildings were evacuated after a man was seen carrying canisters strapped to his back and threatened to blow himself up. Tottenham Court Road has been closed for business and shoppers due to the unfolding situation.

Windows of an office block – Shropshire House, on the corner of Tottenham Court Road and Capper Street were smashed and computers, office equipment and paper were being thrown out from a top floor window.

It is being claimed over Twitter that the man, named Michael Green, entered a logistics office and that he had failed an HGV training course and wanted to recover his fees. 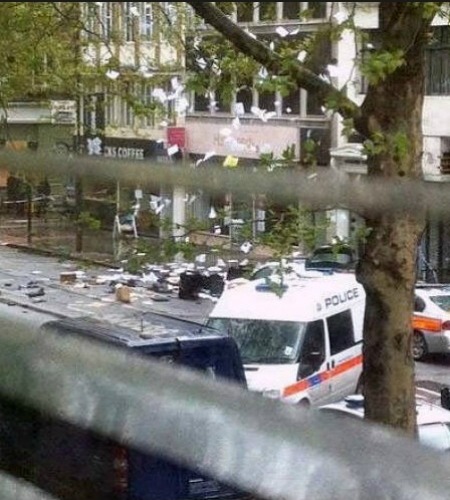 Armed police and fire engines were rushed to the spot and a police negotiator was understood to be en route.Police sources say that the incident it is not being considered a terrorist or “serious” incident.

Update 14:00 : 4 people are being reported to be taken hostage in the building.

Update 14:40 : Police snipers are taking position on the rooftops in the area.

Update 15:00 : The siege situation is over as police arrest Michael Green

Over to the next page for an eye witness account

Update: An arrest has been made

We have arrested a man at Tottenham Court Road. A search of the building is underway. Further details to follow #TCR