Clapham Common was awash with devotees donning pork pie hats, fezzes and pith helmets, young, old and even older. The main stage was a revolving door of ska music and reggae, while the tent stage played a succession of dance music. Some of the band were more miss than hit – Ms Dynamite certainly seemed to have lost her bang – but the occasion itself was a resounding success.

Regardless of the rest of their attire, everyone was wearing a smile, just showing how a little bit of sun helps us discard our traditional British reticence.

One of the most striking things about Madness is how the music – basically black Jamaican ska – has attracted such a white, modish following. Somehow the music encapsulates the enigma of London – ageing skins and mods mingle freely with rastas – even the Pearly King and Queen blessed us with their attendance. 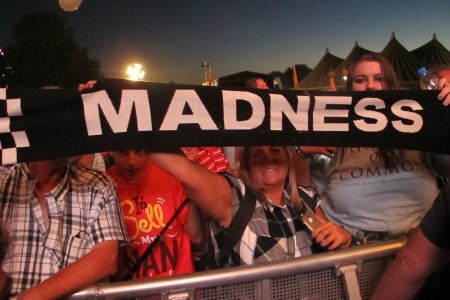 Now celebrating their 40th year,  the band is due to launch its new album Can’t Touch Us Now on 21st October. The gig was a celebration of Madness past and present, with consummate performer Suggs guiding the audience through the history of the band, while introducing friends and family.

While the classics – House of Fun, Baggy Trousers, Our House, One Step Beyond, Embarrassment, It Must Be Love ­– got the crowd popping, perhaps the biggest reaction was to the band’s rendition of the Bon Jovi classic, Livin’ On A Prayer.

Not quite an earthquake this time round, but after a day enjoying the sun, nobody was left complaining.

Madness will be playing Hyde Park on 11th September, before touring Europe and returning to UK later in the year, including performing at the O2 Arena on 10th December. For more details, visit: www.madness.co.uk.

Other traveller reviews on Namibia

Looking up the BT Tower’s Skirt