As Apple made the move to abandon Google Maps in favour of its own new mapping system under the new iOS6 system update, it came under fire from disgruntled users who found many quite serious problems with the maps.

Train stations have gone missing, the massive iconic Sears Tower in Chicago has been moved to a smaller tower and in Ireland, Dublin has been given a new airport where a farm called Airfield currently stands.

In a major glitch, searches for London mostly tends to redirect users to the small city of London in Ontario, Canada.

Stratford Upon Avon, the famous birthplace of William Shakespeare, as well as the towns of Warwick and Leamington Spa have all disappeared from the map below, which compares the new Apple mapping system with Google Maps (via theamazingios6maps.tumblr.com/) 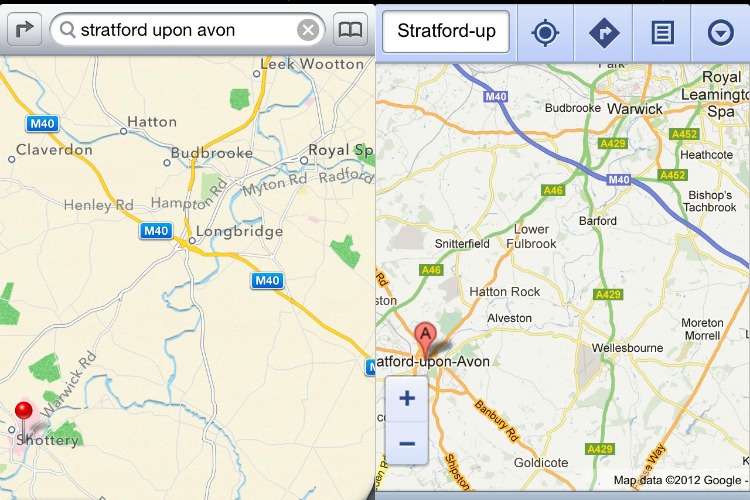 Chris Taylor of social media website Mashable said “Apple bought three mapping companies to make this happen, and has had years to refine it. How bad could it be? The answer, I’m sad to say as an Apple fan, is very bad indeed. Almost unusably bad.”

John Walton of Australian Business Traveller pointed out that the company had conveniently managed to get the location of their widely-adored Apple stores into pride of place on the maps “The only way that iOS6 Maps is an improvement is if you’re looking for an Apple Store. These are more prominently displayed than just about anything else in the cities where they appear.”

Many bloggers and users have advised against upgrading to iOS6 until the errors have been ironed out.

Dear Apple can we please have our Google Maps back? Your maps arecompletely useless! #iOS6

The absence of @googlemaps from #iOS6 might actually force me to get an @android phone. Apple’s new Maps app is awful, absolutely awful.

The new Apple Maps in #iOS6 is a real fiasco. theamazingios6maps.tumblr.comNot sure Steve Jobs would have given his sign off. It’s just not ready.

The best complaint I read about #AppleMaps #iOS6: “It tells the closest pub is over 20 miles away … in the UK you know thats impossible!”

Got to say this for Apple maps – it’s made the idea of moving to Luton a lot more attractive twitter.com/ruskin147/stat…