Huge storm, high winds batter the UK with more on the way

Fortunately advance ‘red alert’ warnings from the Met Office ensured that schools were closed, although there were power cuts to thousands of homes. Many Scottish homes are not expected to get electricity back until after the weekend due to damaged power lines.

Winds were recorded at up to 165mph in the far reaches of Aberdeenshire in Scotland, with a wind turbine in North Ayrshire put under so much pressure that it dramatically burst into flames.

Trees were torn down, roofs were torn from houses and roads were closed, with some lorries in the highlands blown onto their sides. 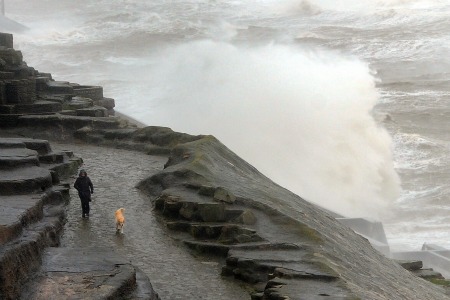 A massive air pressure plunge was recorded causing an “explosive development where the pressure drops dramatically in a very short time leading to these sorts of conditions” according to Helen Chivers, a forecaster for the Met Office. “

“It’s down to what could be described as an explosive, developing area of low pressure coming in from over the Atlantic. In the past 24 hours, that frontal system has developed into a massive storm which has been blown across the Atlantic by the jet stream.” she continued.

The pressure dips coming in across from the Atlantic look set to continue over the next week, leading some to speculate that there will be more stormy weather ahead in Scotland.

Paul Michaelwaite, director of the website Netweather told the Scottish Herald “Over the next few weeks there is the risk of an increase in the frequency of deep low pressure systems crossing the Atlantic and moving close to, or over, the UK…there looks likely to be at least a couple more pretty vicious looking systems coming through during the next seven days”