Ibiza – a tale of two holidays, from the superclubs to the super-chill

Dressing in a lion suit and pulling dubious dance moves while in an abandoned zoo’s penguin enclosure is a summer memory not everyone will be able to boast they have. But go to Ibiza and you’ll get it. The now infamous Zoo Project, just outside San Antonio, is one of the best parties on the island. And it’s the most surreal, fun night out Ibiza offers. Ride their Noah’s Ark (aka booze cruise) to get there, then rave on down in the seal pit all night.

But while I might be an Ibiza expert – I go out there every summer as part of my job as a writer – believe it or not, I’m not a huge clubber. For me, the mix between party hub and chill-out central makes it an island for everyone.

Of course, clubbing in Ibiza is clearly world-class. Whether you head to the more commercial, less electronic dance of Ibiza Rocks (this year’s line-up includes Kaiser Chiefs, Tinie Tempah, Ed Sheeran and Katy B) or one of the superclubs, you need to enjoy at least one night dancing until dawn – or you’ve wasted your plane ticket.

True, the Ibiza superclubs are expensive. We’re talking the equivalent of £40-£56 just to get in, and about £11 for a vodka mixer at the bar. If you’re going to pick one, make it Space on a Sunday, in Playa De Bossa. One of the world’s most revered clubs, you’ll hear the beats blasting out from the balcony and catching on the air from way down the road, from late afternoon onwards.

Everyone remembers their first Space experience. It doesn’t look like much from the outside, but with 12,000 clubbers packed inside, and 40 DJs a night doing their thing, it’s like a whole other world. Dotted among the crowd are dancers adorned in robot masks, their bodies doused in metallic body paint, towering above the crowds on stilts. Expect to dodge quite a few gurners who try to make conversation, but succeed in little more than dribbling down their T-shirts.

For Ibiza virgins, there are two main towns you need to get yourself acquainted with – San Antonio and Ibiza Town. San An is a place less civilised. Expect more student-like travellers here or stag and hen dos. Having said that, a drink at legendary bars Café Del Mar and Café Mambo while the DJs do their thing on the seafront as the sun sets is an absolute must. 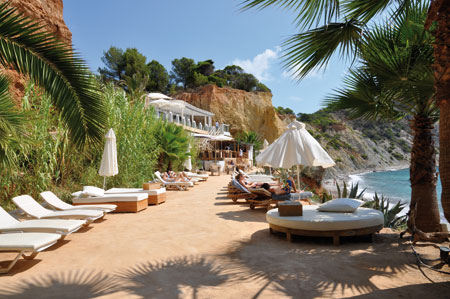 For a chilled vibe and a touch of culture, you want to spend most of your time in Ibiza Town. D’Alt Vila is the old walled town and a Unesco World Heritage Site since 1999. Wander to the top for spectacular views of the harbour and authentic little restaurants hidden down narrow streets.

And Ibiza isn’t nicknamed ‘the white isle’ for nothing. The beaches are pretty special, especially considering you’re only in the Med. Try Las Salinas, a breathtaking 1.5km of gorgeousness, scattered with beach restaurants. You can easily dream a day or three away surrounded by glamorous folk. Walk towards the watchtower to explore the small coves and take a picnic. Or head to the forest in San Lorenzo for a barbecue.

To really see another side to Ibiza, head north or inland to relax, leave the fancy dress behind and feel a little more sophisticated. It’s crazily beautiful – think pine forests and olive groves and white-washed hilltop villages. Here, you’ll find yoga retreats and incredible diving sites. Or jump on a horse and canter through the forests with riding schools, such as North Ride Ibiza. You can even wade into the sea on horseback or take a weekend excursion; both are guaranteed to clear any hangovers.

Yes, it’s in the north that you’ll feel a million miles away from those laserlights, as though you’ve found the secret Ibiza that no one else knows about. Away from the superstar DJs, promo girls, bassline beats and people dressed as lions there’s a hell of a lot more to explore than the dancefloor. Want two holidays in one? You’ve got it.

Fly easyJet from London Gatwick from £84.99 one way. Flight time is about 2 hours, 25 minutes easyjet.com

More on Zoo Project at channelzoo.com
More on Ibiza Rocks at ibizarocks.com
More on North Ride Ibiza at north-ride-ibiza.com