India’s Rickshaw Run: get set for the ride of your life

There’s a knot of fear deep in my chest as I grip the handlebars of my auto-rickshaw; that, and a healthy dose of you-must-be-crazy disbelief.

It’s the first day of test-driving for the Rickshaw Run, a two-week journey spanning nearly the entire Indian subcontinent, and I’m way beyond having second thoughts. Sitting behind me, my teammate, Citlalli, doesn’t look much more confident.

“Come on, it’s just like driving a motorcycle,” says Matt, chief of the Rickshaw Run, who’s giving us a few pointers. I assume he meant that to be reassuring, but I’ve never driven a motorcycle before, let alone any vehicle with manual transmission.

The Rickshaw Run is the brainchild of The Adventurists, a Bristol-based travel company that tempts thrill-seeking (and perhaps foolhardy) folks to join them in “fighting to make the world less boring”.

One of seven adventures offered by the outfit, the Rickshaw Run takes place three times a year in India, rotating its start and end points between Shillong, Jaisalmer and Fort Kochi.

While no one has yet died on the Run, the risks of traversing potholed, truck-heavy roads in a 145.45cc-engine vehicle are very real. 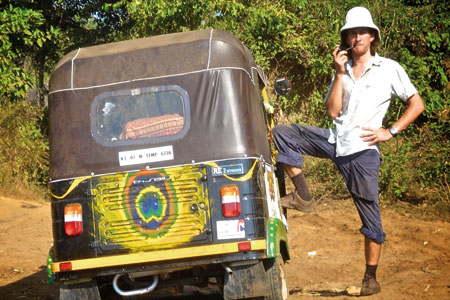 The Adventurists warn: “Your chances of being seriously injured or dying as a result of taking part are high.” Spiffing.

As Matt yells out instructions, I fumble for the clutch, then the brake, then the throttle, and at all times our rickshaw jerks forward like a newborn colt trying to find its legs.

If I can barely make it out of the practice track without stalling, I can’t help musing on how I plan to get to the finish line.

Here in Shillong, an old hill station located in the far northeast corner of India, it’s nigh on impossible to wrap my head around the trip to come.

The distance we’re to cover is the same as that from London to Moscow, and yet we’ll be enduring it in a vehicle the rest of Asia uses for short jaunts around its cities.

Our destination? Jaisalmer, an ancient, sandy-coloured fort city tucked away on the western edge of Rajasthan’s Thar Desert, a mere 3000km away. 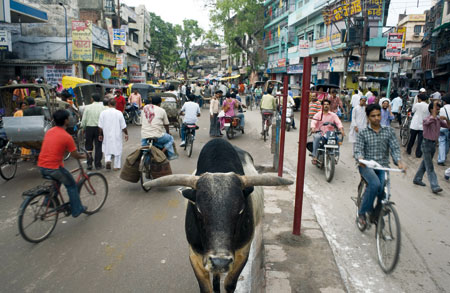 After three days of test-driving and a raucous launch party to kick the whole thing off, it’s time to hit the road – specifically the 1500m descent awaiting us.

We meet at the ‘pimping grounds’ for a final time, the smell of petrol, wet paint and panic in the air.

The muddy field is a beehive of activity, teams swarming, buzzing about to put the finishing touches on their tuk-tuks: neon-coloured horns, stereo systems, even custom-made seat cushions.

Matt walks around, clipboard in hand, the  cheeky grin on his face saying: “You all have no idea what’s about to hit you.”

Indeed; the streets out of Shillong are not only clogged with 70-odd brightly painted rickshaws, but torrential downpours, too.

Dips in the road swiftly become rivers, then fords, and a continual sheet of water pounds us, which, naturally, goes well with our broken windscreen wiper. At least our hazard lights insist on flashing at all times – it’s probably for the best.

But when I don’t have my head out the rickshaw, helping Citlalli navigate the obstacle course that is the Indian highway, I’m able to take in the scene around us.

The name for this particular state, Meghalaya, literally means “the abode of clouds” in Sanskrit, and it’s little wonder why. Wispy puffs of white rest over the region’s many rolling hills, their jungled slopes covered with verdant undergrowth and trees.

Occasionally, we spot a river winding through the countryside, with a calm that belies the chaos around us. 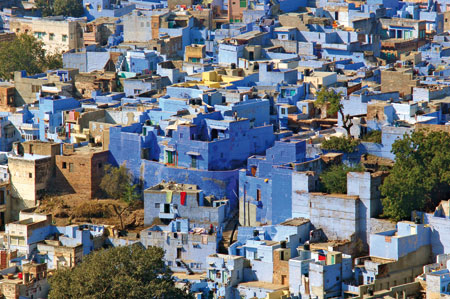 This corner of India, known as ‘The Seven Sisters’, after the number of states packed into the tiny area, was only opened to tourism a few years ago; due to ethnic violence and unrest, you needed an entry permit previously.

Even today, the lack of tourists lends an air of remoteness to the region that makes it feel as if you’re the first to explore it.

By day’s end, we’ve only managed to cover 110km; thankfully we’ll go 210 the next day, and 270 the day after, bringing us to Siliguri, a city right on the cusp of where the northeast meets mainland India.

Our expectations ofdistance quickly adjust; while the rickshaws can be driven up to 50km/hour, in reality we average about 30 – thanks to the rutted roads, way too many chai breaks, and, of course, inevitable breakdowns. 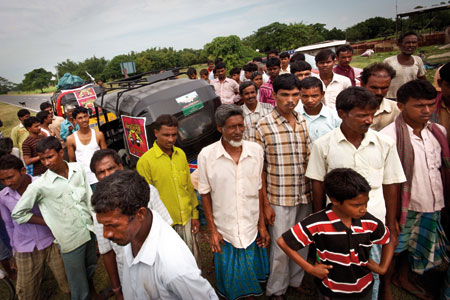 On the morning of our fourth day, we wake early, nervous for what’s ahead. We’re planning to cross from West Bengal into Bihar, one of the poorest and most undeveloped states in India; worse yet, we were warned in Shillong against rumours of bandits and robbers here, told to: “Make friends” and “Don’t go through Bihar alone.”

Entering the eastern state with three other teams, we’re collectively holding our breath, waiting for the worst to hit.

Gone are the steamy hills of Meghalaya; in their place, the land grows so flat that many areas are flooded, our route less of a road than a strip of land bordered on both sides by water.

In other places, bright-green fields of corn and banana trees stretch out to the horizon.

Water buffalo submerge themselves in the river to stay cool, their black hides gleaming under the noon sun. As beads of sweat trace a constant path down my forehead, I’m only slightly jealous.

Although no bandits ever come our way, Bihar still seems set to deter us: there’s a dangerous night drive on dark, narrow roads straight out of a Hitchcock film, followed by a 30km traffic jam the next morning. 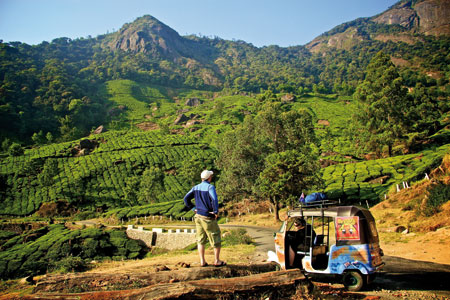 The curious locals make it all worth it, however, our conversations with them might not have happened were we not rattling across their country in a rickshaw.

As we near the dusty town of Ara, our last stop in Bihar before Uttar Pradesh – India’s largest state by population and famous for sights such as the Taj Mahal and Fatehpur Sikri – two teenage boys ride up next to us on their motorcycle, the wind ruffling their silky black hair.

“Do you want to ride?” the boy on the back calls out. Citlalli is driving, and I give her a look in one of our side mirrors. “Maybe,” she banters back playfully.

“Do you speak Hindi?” they ask, their voices raised above the relentless din of bus horns, lorry motors, and the bleating of cows. I answer this time, leaning my head around the rickshaw. “No. We don’t.”

“Then how do you survive here?” My eyes meet Citlalli’s again. It is an excellent question. 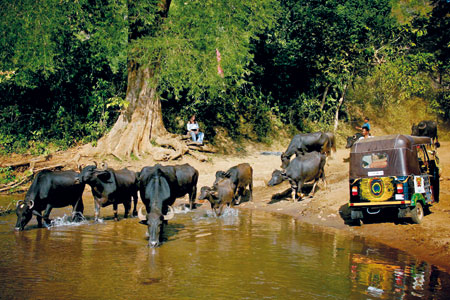 Matt issued us with an important warning: “Don’t drive at night.”

Never mind that our headlight only emits a faint glow, but the roads themselves are rarely lit, and objects – whether a lorry, cow, stray dog or person – can suddenly appear right in front of you. But as night falls on our seventh day on the road, we’re nowhere near our destination: the holy city of Varanasi.

We have no choice but to continue; after all, we survived our night drive in Bihar a few days earlier. But this time, there’s another element to contend with – a monsoon-like rainstorm that has us recalling our initial drenched descent from Shillong.

Citlalli takes the wheel while a guy from another team and I sit in the back, our heads comically poking out each side of the rickshaw.

We still haven’t bothered to have our windscreen wiper fixed, and so we’re forced to help Citlalli steer through the darkness. “Cow!” we shout into the wind. “Bicycle! Truck! Child!”

I’m wearing a raincoat, and yet it makes little difference – the rain pelts me as strongly as if someone were spraying a garden hose in my face. My clothes, usually pungent with sweat, grease, and oil, are now also sopping wet.

But battling the flooded back streets into Varanasi is worth every moment we almost tipped over – we have our first day off in the city, and celebrate having reached the halfway point of our trip.

Besides giving our rickshaws a rest and catching up on laundry – which the guesthouse hangs along the street to dry, much to our humiliation – we explore all that we can of India’s religious capital, waking early for a sunrise boat ride along the sacred Ganges River and attending a Ganga Aarti ceremony that evening performed by seven priests.

This particular ritual involves a series of fire offerings dedicated to the Goddess Ganga – or Mother Ganga, as she is also known. As billows of pungent, smoky incense waft into the air, I can’t help giving thanks for the 1500km we’ve covered so far.

The next 1500km pass in a blur. Our route leads us from Varanasi to Agra, where we park our rickshaws and sprint to the Taj Mahal before sunset, and then to the northwestern state of Rajasthan, India’s largest. Meaning ‘The Land of Kings,’ Rajasthan is arguably best known for its fort cities and their beautiful maharaja palaces – the Pink City of Jaipur, the Blue City of Jodhpur, and finally, the Golden City of Jaisalmer.

We share the road into Jaisalmer with herds of bow-legged camels, savouring every last mile before the finish line. Once again I’m filled with disbelief, just as I was 12 days ago in Shillong – this time, though, it is disbelief that we’ve actually made it.

Matt is waiting for us when we rattle to a stop for the last time. “You look like you’ve had an adventure,” he says as we walk up to him.

And from the grease stains on our T-shirts to the layers of dust and grime coating our rickshaws, we certainly have. 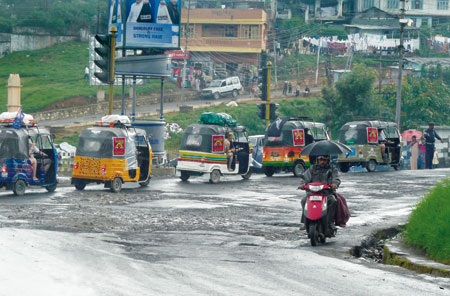 The closest airport to Shillong is Kolkata. Return flights from London Heathrow, via Delhi, start from about £512 with Air India.  airindia.com

Currency: £1 = INR87 (Indian Rupees) registering: You can sign up now for the April 2013 edition of the Rickshaw Run, or join the waiting list for an earlier edition.

Places are limited to 70, otherwise The Adventurists run out of rickshaws. The entry fee is £1395 per team. More on the website.