We are racing towards an infamous island in our speedboat at full throttle in a sea famed for pirates, enjoying our James Bond moment. We’re a couple of mere backpackers seeking adventure in foreign waters.

We’ve just left behind a luxury Indonesian private retreat. Nikoi – part jungle and part beach – with big boulders looming over lush mangroves that creep into the turquoise waters of a desert island that was uninhabited until 2007.

But our target destination is the bigger Indonesian island of Bintan – the largest of 3,000 which make up the Riau Archipelago – and just 85km from affluent Singapore. The area has a notorious history of pirates and the seas can get treacherous during the monsoon period in December with fisherman in rickety boats negotiating terrifying 10-metre swells.

As we bounce over the waves, we jet past several bobbing, traditional fishing boats being steered by Indonesians who seem perfectly content to take their time.

I shut my eyes and imagine the sea gypsies, pirates and fierce warriors who protected the Malay royal family on Bintan all crossing the Singapore Straights in their own unique craft a few hundred years ago.

Bintan was a major trading post for ships laden with exotic wares like spices, tea, opium and silks travelling between India and China. The island was a strategic haven for trading ships sheltering from the fierce typhoons that rampage the South China Sea and Indian Ocean. And my heart is thumping to the thud of the bow as I remember we are following in the footsteps of some of the globe’s keenest explorers.

In 1202 Marco Polo, the infamous Venetian world traveller, spoke of his voyage to Bintan. And British TV adventurer Charley Boorman travelled to Bintan and Nikoi by boat during his By Any Means voyage from Ireland to Australia. 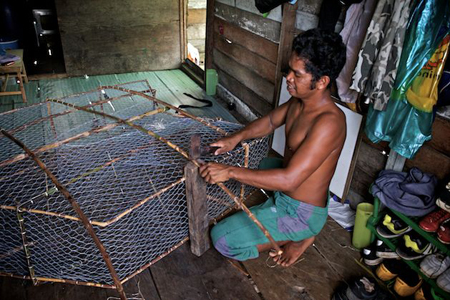 Choose your own adventure

We, too, feel like adventurers as the brakes are applied sharply and we ride a bow wave, pulling up at the small jetty.
We are greeted by Atok, a charismatic and bright teacher and our translator for the day. Atok is helping lead Nikoi’s Island Foundation’s education programme for Bintan’s poor families.

Aussie Andrew Dixon, along with other Nikoi Island owners, set up the foundation in 2009. The foundation is hungry for more volunteers to get involved with teaching and mentoring children, football coaching and more.

We are here to see what opportunities are available for backpackers and travellers looking for a volunteering experience. It is certainly not for the fainthearted, or those needing Western comforts, but it will be very rewarding.

Most Bintan families are illiterate fishermen or labourers and educational attainment among kids on the island is low.
As well as helping kids, the foundation is aiding locals gain new skills like jewellery making and encourages the development of business skills too.

Due to over-fishing and government restrictions preventing sea gypsy families with a mythical knowledge of the sea from living on boats on the ocean, the fishing industry is suffering greatly. In many cases, the tourism industry passes them by too as they don’t have the skills – or the English language – to get involved.

The island feels much more like the real Indonesia – unlike the one that many Aussies and backpackers will have experienced during drunken bacchanalias in the party paradise of Bali.

We begin our journey across the green and hilly island, negotiating large potholes, plenty of dusty, noisy scooters and the odd cheeky monkey near the forests.

We pass colourful shacks and roadside stalls with smoke spiraling up from grills selling sweet-smelling chicken satay, noodles and tropical fruits. Children sit on the roadside – some play with old, worn footballs in the field and others grip on tight as they hitch a ride on their parents’ scooter.

The foundation has set up five learning centres where the children can supplement their curriculum by dropping by before or after their normal school day ends.

Teluk Bakau and the other four learning centres are basic but kids’ drawings decorate the walls and there are books in English as well as Bahasa, the local language. As our car pulls up outside the first school, Teluk Dalam, a group of girls erupt into laughter when we step out. They are not used to seeing western faces here and we are happy to provide amusement.

The boys are crowding round the tuckshop man, vying for his attention for an array of lollies and sweets with their pocket money.
Local staff try to bring confidence up by teaching the children some English and helping them with their curriculum work as well as playing games on the few computers that have been donated.

Who Wants To Be a Millionaire is very popular in class, and one boy wearing oversized maroon school shorts, Amat, does an impressive and amusing job of asking me if I want to play for a million dollars.

“We want to raise children of the 21st century or they will always be on the fringes,” says Atok. “They don’t have a voice.

“We want to show kids they are world citizens too and could work in state or abroad.

“These kids still have their full sensory experience as they are not in the city, they are easy to teach.” 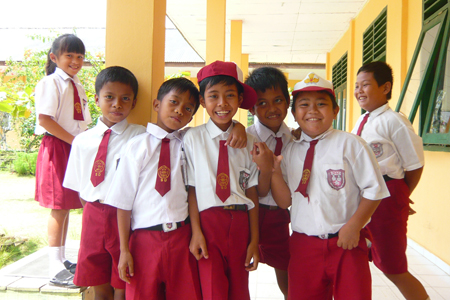 Too tired for school

Teachers will often see kids fall asleep at their desks after going out on a night’s fishing voyage squidding with their parents.
“The problem is, parents don’t see the value in school, but we are getting them involved too.

“The families here are 80 years back in time,” adds Atok, who the kids find great amusement in referring to as the “handsome monkey”.

“They are scared to touch a computer but have become more confident over time.”

The Island Foundation is also keen to reconnect Bintan with Singapore after its long trading history.

Wealthy Singaporeans and expats frequent Nikoi and Bintan on weekends but rarely go beyond the resorts to explore.

We have a bit of an ‘Angelina Jolie moment’ next as we say goodbye to the kids and jump in the car to head to the ancient fishing community of Orang Laut.

Wooden shacks line the water on the jetty and dogs roam around, their hungry eyes ogling the small rays and other fish drying out in the sun on nets.

We go inside the basic shack of village headman Pak Boncet and his wife Ibu Satna. I notice straight away there are no bedrooms in the shacks, but there are blankets on the floor.

From the 1960s, the boat nomad Suku Laut tribe was forced off its homes at sea when the shipping and fishing lanes of the busy Malacca Straights were contested and drawn up.

The jewel of Singapore

Just an hour’s ferry ride from prosperous Singapore, the tribe still has all the traditions of the sea but was forced to live on land on Bintan after hundreds of years of boat nomadism. And with global over-fishing and paying off debts to the Chinese, the Catholic tribe struggles to survive and is ostracised within the mostly Muslim society of Bintan.

The tribe, who have animistic beliefs, face extinction. Most are illiterate, dwell in basic shelters and they still live in an economy mostly based on bartering fish.

Development is happening fast on Bintan and the Indonesian government is planning a tourist village where visitors will come to see the traditional fishing shacks and homes of the tribe.

Now, with coaching from the foundation and jewels donated by global brand Swarovski, the women are sharing their stories of the sea by creating symbolic jewellery to be sold in Singapore.

“I am sharing my dreams and stories from my grandmother and mother about knowledge of the sea that has lay dormant for years,” Ibu Satna says.

“We are very bewildered at all the changes happening on the island and we are scared of the future. We fear we will be like fish an aquarium with tourists coming to gawk at us, but making jewellery is a way for us to dream and be productive too.” 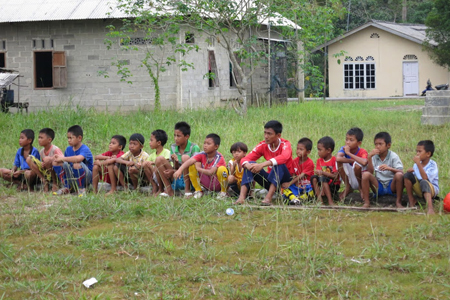 Our day ends with a visit to another community where a football programme led by local coaches and some legendary Singaporean players has been very successful.

The foundation is keen for sports coaches to volunteer on Bintan and for people with handicraft skills, computer and English literacy competency.

“Volunteers will have a touching and real experience,” adds Heena. “The kids here are so enthusiastic and really want a brighter future for their families.”

Volunteers can stay in authentic homestays with locals and will also get the chance to have their own Robinson Crusoe desert island experience with a break at Nikoi Island.

We head off back to Singapore on the ferry which negotiates the hectic shipping lanes through the tropical heat haze.

We leave with plenty of memories and great stories, and dreaming of our next high sea adventure.

Handle with care: How to find work as an au pair