Insider’s guide to Bolivia and Peru

What makes the La Paz to Lima route so special?
This route, the Chaskis Hop, is named in honour of the Inca runners who formed a courier network all over the Inca empire delivering messages from one side of the empire to the other with astonishing speed. Today it’s backpackers that have beat their own path, visiting amazing places such as Lake Titicaca, Cusco, Machu Picchu and the coastal desert towns of Peru. The people of the Andes offer amazing glimpses into the past, and you will encounter many of the local people defiantly holding onto their Inca and Ayamara traditions. Mix this with the Spanish influences seen in the colonial architecture, combined with the dramatic Andes backdrop, and you can’t help but feel that this is an amazing part of the world.

When is the best time of year to visit?
June to August has the most pleasant conditions in the Andes, but the good weather brings the peak numbers of visitors to the area, so book everything early. June is also the month when Cusco hosts the Inti Raymi Festival, when indigenous groups from across the Andes converge in all their traditional get-up. However, don’t be deterred from travelling at other times of the year –it might be wetter but there will be far less tourists. Just keep in mind that if you want to hike the Inca Trail, avoid February as the trail is closed, although there are some great alternative treks you can still do, such as the Salkantay.

Are there any local foods or drinks that travellers should be trying?
The seafood on the coast of Peru is amazing. You should try the ceviche, which is fish marinated in lime juice with red onions and coriander. The Chinese settlers influenced one of Peru’s premier dishes, which is the lomo saltado, a beef stir fry and always a safe bet. If you want to taste the most exotic local dishes then try something with llama in it, or even the cuy (guinea pig). Inca Kola is a local soft drink which is similar to cream soda.

How easy is it getting around?
The local transport is good if you take the better carriers between the destinations, but there are some dodgy operators who are best to avoid. Learn a few words in Spanish to help you book your tickets and be wary of touts on the street. There are many travellers doing the Gringo Trail between La Paz and Lima so don’t be afraid to ask for advice from people who have just come from the places you are heading.

Is it dangerous?
No more dangerous than most places in the world. Be extra careful after dark on the streets of Lima, Cusco and Puno, but use your common sense and you will be fine. Being ripped off by taxi drivers or souvenir touts by a dollar or two is the biggest risk most people face. Pick-pockets exist in Lima and Cusco, so be aware, but not paranoid. 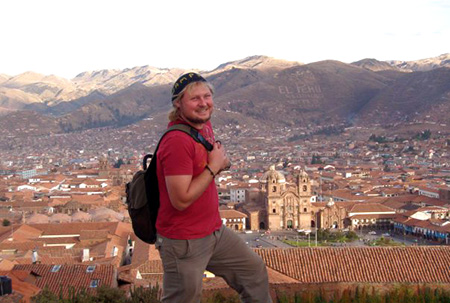 Any top tips for La Paz/Cusco/Lima?

La Paz has an impossible topography, built in a valley which slopes down to the main avenue called the Prado. La Paz is also the most interesting in terms of people watching and what you can spot on the streets. My favourite thing to do is to try and get lost in the central neighbourhoods to see what you can find. You quickly discover La Paz is a huge street market with lots of activity. During the day it’s safe in the central areas , plus you can’t get really lost because if you just head downhill you’ll eventually end up on the Prado.

Cusco is definitely a backpackers town with a great nightlife and a place that you don’t want to rush through. I most enjoy the mixture of colonial architecture visibly built on Inca foundations which is easy to spot as you walk the cobbled streets. The Plaza de Armas stands proud in the middle of the city and makes a great place to people watch and soak up the atmosphere. The many cool pubs and restaurants give you almost too many choices.

Lima used to have a bad name but has come into its own as a destination with many people choosing to stay out in Miraflores and Barranca, close to the beaches. Surfing, cafes and good nightlife are all associated with those areas as well as the great seafood on offer. But do try and venture into the historic centre and see some of the best samples of Spanish colonial architecture around the Plaza de Armas, noting that Lima was the capital of the Spanish conquistadors in South America for many years. Check out the Catacombs found below the San Francisco Church for something interesting, if a bit creepy. The Spanish Inquisition Museum is also worth a gander.

Is altitude sickness an issue?
Yes. Everyone will notice it once they hit the higher levels of the Andes, especially in Cusco, Lake Titicaca and La Paz. To ignore it can be dangerous, but there is no need to fear it either, especially if you are taking the right precautions. Taking it easy for about 48 hours once you hit the altitude should be a priority – don’t exert yourself, just take light walks. Drinking a lot of water and not over-eating helps, plus try to refrain from drinking alcohol for at least the first day is very wise. Also try the coca tea, which helps lessen the effects. There are also pills you can take as well.

What’s your favourite part of the trip?
I think the Uros Islands on Lake Titicaca are amazing! These are man-made floating islands formed over many years from lake reeds. They are populated by a community that has lived in a most unusual way for centuries. I also love the dune buggy ride in the desert oasis town of Huacachina in Peru, not only for the adrenalin but also because the sun setting over the desert at the end of the trip is amazing. I also believe no ruins in the world can match the majesty of Machu Picchu perched on top of its mountain – it’s a must-see destination!

Harry Potter and the Deathly Hallows premiere in Leicester Square

Give us a giggle: Matt Okine on his ‘monster of a comedy show’ at Soho Theatre – London

Don’t call it a comeback: Tony Blair wants to re-engage with British politics