Come October, this could be a reality. Well, almost.

Rhys Darby is as close to Murray you’re ever going to get, and the Kiwi comic is taking part in Stand Up on Everest later this year. They’re still looking for people to join the 50-strong audience and help raise money for Save the Children.

“I think it’s a once-in-a-lifetime opportunity,” says Darby, his distinctive voice bouncing out of our phone as he chats from his home in California. “You have to make a real commitment to go to a place like that. Your regular comedygoers would not necessarily think to go up to Everest Base Camp to watch a gig,” he laughs.

Fellow comedians joining the trek are Stewart Francis, Craig Campbell, Glenn Wool, Simon Evans and Terry Alderton. “You get a big adventure and the comics are all fantastic. And you’re not just watching them perform, you’re getting to spend nine or 10 days with them, so relationships will build there too.” Imagine saying you’re mates with Murray? Awesome.

Darby is also heading for London in July with his new Show, Mr Adventure, so TNT took the chance to find out more, and to ask if we will ever see Murray again…

We must confess, we miss Murray. Do you miss him too?

I do miss playing him. It was a lot of fun. It was a very exciting time in my life. Things were really taking off and we were having all this success on a fantastic network in America. It was all a bit dreamy, looking back. Murray was a character that felt very natural to play. I just sort of plucked him out of nowhere. I suppose he was inspired by the multitude of bosses I’ve worked for; I think a bit of a throw-back to my military days are definitely in there. Some of the guys who used to tell me what to do and really had no idea what they were doing (laughs). He’ll always be close to me, that character, and the three of us get together to reprise those roles and do a little skit here and there, for charity events and things like that.

There was talk of a film…

There has always been talk of a film – it’s one of those mythical things (laughs). I think there will be a point in the future, when things calm down a bit, and we’ll get together and possibly do that. Never say never… but don’t hold your breath

Do you often get asked to ‘do Murray’ as it were?

Not in my live stand-up shows, because most people who come to those know what I do is very different. But I get requested to play him for various projects.

Do people shout “ginger balls” to you on the street?

No, I’ve never had that – I get the odd “Murray!”. The funniest one was when I was on safari in Tanzania. There I was looking at giraffes and things like that, and I heard “Murray!”, and there was this Land Rover full of Americans looking through their binoculars at me (laughs).

For your new show you are rocking a ’tash. What with Murray’s goatie and now the lip fur for Mr Adventure,do you find your facial hair gives you comedic powers?

Yeah it does. It’s all about the hair really. I’ve got big, thick hair – a lot of people used to think my hair was a wig when I did The Conchords because of the way they combed it; it looks like they just bought something and plonked it on there. It was refreshing to get rid of the goatie, and the moustache makes me feel more adventurous. And I like any excuse to look like a dork (laughs).

You’re touring New Zealand in May and the UK in July. New Zealand is, of course, your home country, but the UK is arguably where you found initial success on the comedy circuit – where do you feel most at home when on stage?

That’s a good question. It probably is the UK for me because I spent a good seven years there and that’s where I really cut my teeth in stand-up. So, yeah, the UK audiences are probably my true homies. 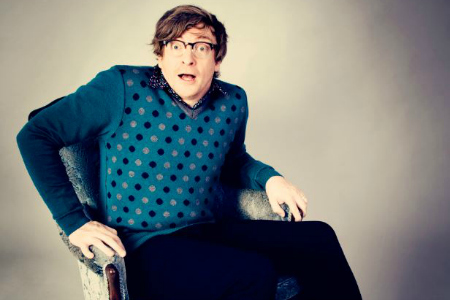 Tell us about Mr Adventure…

Over the last few years I have been on a number of adventures and I looked back and thought, ‘Wow, I should tell some of these stories.’ I’ve been to Africa a few times, trekking for mountain gorillas, I’ve been up Mount Kilamanjaro. I’ve been to Loch Ness twice. There I stayed with a new-age, raw-food-eating Buddhist couple who introduced me to UFO spotting. They were possibly shooting stars or satellites, but I got swept up in the whole thing; some of them moved in such a fashion that you would question, ‘Are they something else?’. The woman also told me she had seen the Loch Ness monster twice, so I will put that in the show.

Our readers are travelling types – what tips would Mr Adventure give them?

To go off the beaten track. Follow your nose. Go to places that have been recommended by Lonely Planet and so on [“or TNT” we interject] or TNT more importantly! (laughs) – but it’s meeting the locals that is going to lead to new adventures. They want to meet people from other places of the world, tell their stories and lead them in different directions – if you listen, you will have a different experience to the one you would if you just did the tourist thing.

So let’s talk about this Everest gig. You’re known for your physical comedy – do you not worry you’re going to be too knackered and cold to jump around and make people laugh?

Yeah, I do really worry about that. I had this idea of doing a small set when I got to the top of Mount Kilimanjaro last year – to be the comedian at the highest altitude to tell jokes. But when I got up there I was in so much physical pain; I was upset; I could barely talk. It’s all very well at sea level – we’ve got all these great ideas and we feel good – but as soon as you get high up, humans just sort of fall apart. I’ll be happy to get just one joke out!

Will you be performing a unique set at the Everest gig?

Yes, I will be doing a set based on my experiences on that nine-day trek.

Do you have any snow jokes prepared in advance?

(Laughs) No – although I did have one about the Winter Olympics, how New Zealand came fourth in the snowman making competition. They would have got into the top three, but they misplaced the carrot.

We bet they did. You’ve just turned 40 – is that one of the reasons for your recent wanderlust?

Yeah, it ties in nicely with Mr Adventure. At 40 you want to look back at what you’ve done so far, and to think that I have been to a few places and experienced some fantastic things makes me feel good. So this whole Mr Adventure is a bit of a celebration for myself for my 40th really. I can still do it, I’m still kicking it.

For the chance to join Rhys Darby and the five other comedians for Stand Up on Everest, click here. His Mr Adventure gig will be held at the Shepherd’s Bush Empire on July 23 & 24. To book, click here. 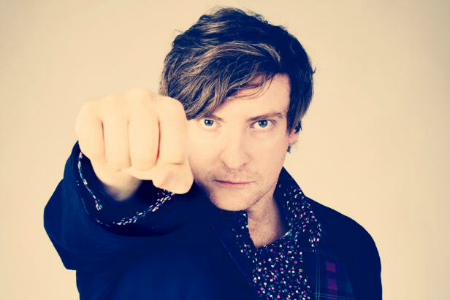 Gaddafi’s family given tickets to Olympics