Iran blocks Google and Gmail, and announces it will cut off entire country from Internet by March

On Sunday Iranian state television announced Google and Gmail would be blocked owing to threats from ‘zionist viruses’.

A minister has announced that the country will eventually transition from the Internet to a ‘domestic internet network’.

The deputy communications and technology minister Ali Hakim-Javadi said: “In recent days, all governmental agencies and offices have been connected to the national information network.”

The move will allow the government to control more tightly the news available to its citizens and prevent the discontents who organised protests throughout last summer via Twitter and Facebook from doing so in future. 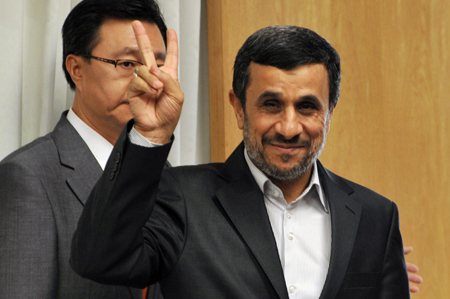 Ahmadinejad: Peace, but not freedom (and not really peace)

Far more sinisterly some fear the move is aimed at preventing viruses such as the StuxNet virus, which destroyed much of Iran’s uranium enrichment centrifuges, from delaying their nuclear enrichment program.

Iran maintains it is enriching uranium for ‘civilian purposes’.

For those among you with a ‘Zionist Conspiracies as alleged by wacko anti-Semites’ wallchart, you can now add computer viruses to global capitalism, global socialism, homosexuality, psychiatry, 9/11, the AIDS virus, Hollywood, and science.

Ashes 2013: Second Test, day 2 wrap – England 3-31 after Siddle rips through top order to give Aussies half a hope