“The Irish may laugh if you ask them outright if they believe in fairies. But ask them to go near one of the fairies’ forts” – Rowan trees, which apparently can bring you dire misfortune – “they’ll say to you: not on my life.”

I’m unsure whether I’m having my leg pulled – the Irish are as famous for their cheeky humour as they are for their friendliness. I’m onboard a three-day bus tour of southern Ireland, and the emphasis is as much on learning about Ireland’s rich culture as enjoying some bloody good craic.

Throughout our trip we’re fed a constant stream of ‘facts’ about the Emerald Isle, which are part history, part legend, and part complete nonsense spontaneously invented by Carol just to entertain her gullible tour group. And entertained we certainly are.

The fun begins just a few hours into the trip, when I find myself lying on the cold, hard, bluestone roof of 600-year-old Blarney Castle in the ‘Rebel County’ Cork.

Having climbed for what seemed an eternity up the claustrophobic castle staircase, I’m instructed by the castle guide to lie down with my head against the very edge of the roof. 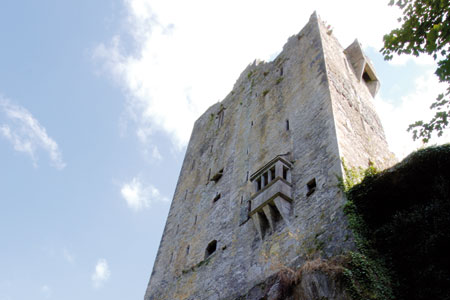 While he grabs hold of me for support, I’m told to bend backwards over a gut-churning 27m-high drop, grab hold of the adjacent wall about a half-metre from the roof’s edge, and, upside down, plant a wet one on the well-worn Blarney Stone.

Legend has it that those who lock lips with this particular slab of bluestone, one of Ireland’s most famous landmarks, will be endowed with the ‘gift of the gab’: an ability to both speak eloquently and flatter the pants off anyone.

It seems to have worked for Mick Jagger, Billy Connolly and even Winston Churchill – all of whom have kissed the Stone before me – and so I say, ‘what the feck’, and I shut my eyes and pucker up.

The details of the following eve are hazy at best – I remember something about dancing all night with a bunch of newfound friends (perhaps the Blarney Stone’s powers came through after all?) to a so-cheesy-they’re-awesome covers band at an Irish pub. I wake up the next day with a throbbing headache, and Carol says yep, no doubt about it, I’ve been visited by a grogoch.

A grogoch, she tells me, is a little elf-like figure that visits you after a big night out; he does a little jig on your head (a-ha, hence the headache) and may even steal some of your cash, which is why you sometimes seem to have drunkenly spent more money than you should have – the cheeky bugger has actually taken it.

Later that day, with The Pogues playing loud and proud on the stereo, the bus heads towards the Dingle Peninsula, Ireland’s most westerly point, where the fertile green hills meet golden sands.

The sun is out and I smile to myself when I see a strong beam of sunlight fall brightly on one particular green hill; if this were a fairytale, that would be where the leprechaun’s pot of gold is hidden.

We spend our last night in Ennis, in Ireland’s ‘most superstitious county’, Clare.

After a night out enjoying live traditional Irish folk music and hot whiskey, I’m sitting alone in my room, when it dawns on me just how eerily quiet it is, save for the blustering wind belting the windowpanes – oh, and the echo in my head of Carol’s throwaway comment that the hostel we’re staying in is haunted.

Now, I don’t believe in ghosts, or fairies, or leprechauns. But maybe the superstitions of this rather magic land have seeped into my brain, because do you think I’m going to spend a night in this room, alone, to see if Carol’s (total baloney) remark is true? Ha, not on my life.

I hurriedly grab my things and sneak into a spare bed in the shared dorms on the ground floor. 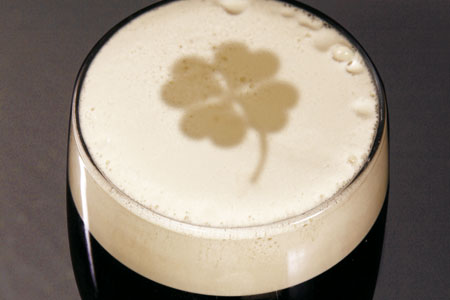 The Rowan Tree Bar in rural Ennis serves gourmet meals that could rival many of the best gastro joints in London. Mains from £8.

Head to An Brog in Cork for a solid weekend drinking session. It stays lively here until late. Pints from £2.40.

A trip to the Emerald Isle wouldn’t be complete without some ‘trad’ music. James O’Keeffe’s Lounge is perfect for a quiet night with friends. Hot whiskey from £3.60. (Lifford Road, Ennis, tel. 065 6821238)

The Woodstock Hotel in Ennis is cheap and cheerful, with a swimming pool and gym for working off all those pints of Guinness. Single rooms start from £23pn.  woodstockennis.com

Bru Hostel is one of Cork’s most popular hostels. They provide free internet and breakfast and a cheap laundry service. There’s also a friendly bar, perfect for meeting other backpackers. Dorm rooms start from £12pn.

A walk on the wild side. TNT Travel Writing Awards