Review: Hanson at the Enmore

Fast forward to 2012, and if the midday queue around the Enmore Theatre is anything to go by, it would seem the cyclone of turmoil from Tulsa is as strong as ever – even if the fans are now chain-smoking late 20-somethings.

I’ll admit it, I had lip-gloss stained posters covering my bedroom walls and played the “Tulsa, Tokyo & the Middle of Nowhere”  movie over and over again on the family video player. Like most girls my age, I watched the screaming fans go crazy at the sight of these long-haired boys, wondering when I’d get the chance to do the same. Now was my time.

Hanson were in town to promote their latest album Shout it Out and they opened the show with the first track from the album – “Waiting for This,” followed by the 1997 hit, “Where’s the Love”.

The huge sing-along proved the crowd still knew every word. Indeed not much has changed in fifteen years: the girls still scream at a deafening level, they still rock the homemade posters and T-shirts, and they still gaze adoringly at the Hanson brothers, whose love they now covet more than ever after finding out that all three are happily married with children. It would seem a new dawn has broken for today’s biological-clock-ticking Hanson fan. 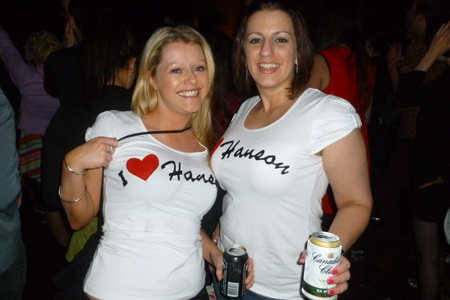 Midway through the set we are treated to an acoustic performance. Zac steps away from the drum-kit to play a wooden box at the front of the stage, while Isaac straps on an acoustic guitar and Taylor sidelines it on tambourine and piano. “Penny and Me” from their 2004 album Underneath is dedicated to all the travelling fans. The crowd light up their phones to record Zac’s solo performance of “Go” and Taylor’s beautiful rendition of “Get Out Of My Heart”, originally released on the Hanson fan page.

The band return to play “With You In Your Dreams”, followed by a tasteful cover of The Beatles’ “Oh! Darling” during which Zac holds a note so long it rivals one of Clay Davis’ “Sheeeee-it” from The Wire.

After “Can’t Stop”, “Thinking of You” and “Give a Little” we finally get to hear the song that we are all there to hear – “MMMBop”. The excitement induces a spate of women practically throwing themselves from the balcony section. Those lucky enough to have scored tickets on the floor are singing, jumping, screaming – it is the same fevered pitch of the Tulsa video.

When “MMMBop” was first released, it was lead singer Taylor who gained the most attention. Even though he’s done the right thing and cut his signature locks – including that awful plaited rat’s tail – today it’s all about the sexy-suited Ike. While performing “If Only” the band break into Marvin Gaye’s “Let’s Get It On” and Isaac teases the crowd, undoing his tie and loosening his shirt buttons. The women go wild. Ike’s smooth look epitomises the band’s new RnB sound. We may be hearing songs from albums spanning fifteen years but it’s the new blues tracks that really showcase the talent of all three Hanson brothers.

After playing for almost two hours, Hanson leave the stage only to return for an encore of “Rock ‘n’ Roll Razorblade”.  They finish with their signature, synchronised jump in the air and proceed to lay on their backs listening to the roar of the crowd.

I leave the Enmore surprised, but impressed. Isaac’s last words are “We will make a promise for you tonight. We will come back if you will come back.”

I’m certain that I won’t be the only one coming back for more.

Entrepreneurs wanted to audition for a new TV show