Island hopping in Greece: Sun, sailing and partying in the Ionian Sea

I’m beside myself with excitement as I board a yacht at Nydri on the Greek island of Lefkas.

I won’t be returning here for a week and am blissfully envisaging spending that time learning to sail on the glorious turquoise waves of the Ionian Sea, coasting into tiny harbours and villages along the way, and sleeping every night on board, lulled to sleep by the sound of the waves lapping against the timber vessel.

What I don’t foresee at this point are the scary storms, skull-cracking, cocktail-induced hangovers and even a man overboard shock that is awaiting me.

After just one day at sea, everything is swaying just a little, shifting almost imperceptibly up and down. Even when I’m on dry land, I can still feel as if the gentle bob of the sea is beneath me. Of course, it could be the effects of the couple of beers I’ve had with dinner in the charming little harbour at Meganisi, but I’m fairly sure it’s just that I’m used to being aboard a boat. 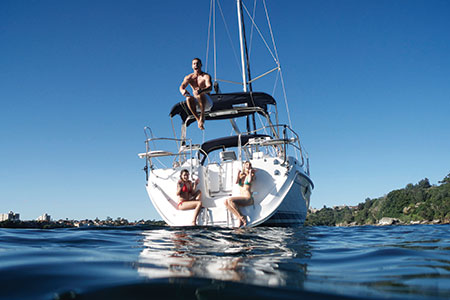 I’m sharing the liveaboard experience with skipper Ed, and just one other trainee sailor. Such a small crew makes for more hands-on sailing time, which is fine by me as I’m learning loads. Already I’ve learned to change direction and handle the steering on the crossing from Nydri, as well as fit in a cheeky swim when we moored off the island of Skorpios.

When I arrived in Greece my knowledge of knots and ropes was basic to say the least. Yet here I am, somewhere between Little Vathi (on Meganisi) and Big Vathi (on Ithaca, the famed home of Odysseus) leaping about the boat as if I’m an extra in an Errol Flynn movie. At least that’s how it’s playing out in my head. The reality, I suspect, is more that my patient skipper Ed is doing all the hard work.

“I’ve been sailing since I was just a boy and not once have I ever been bored,” he tells me. “It’s the best feeling ever to be totally in charge of where you’re going and how you get there, not to mention the exhilaration when the weather gets feisty. I just love it!”

Suddenly, that’s exactly what happens – the weather takes a sharp turn for the worse, and a strong wind picks up. As the boat heads between Ithaca and Kefalonia we start to coast at a clip that demands we move the sails quickly and decisively to control speed and direction. 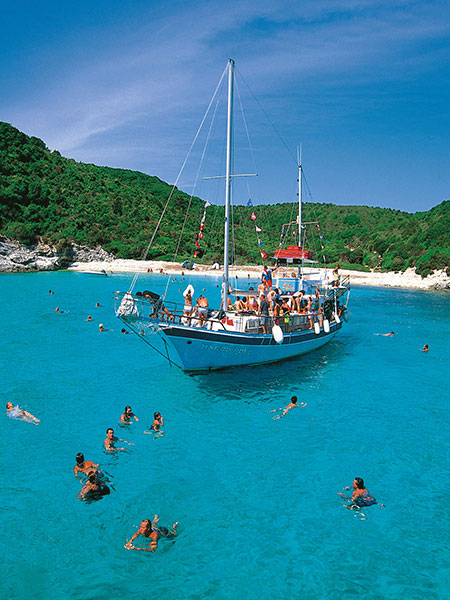 At least those tacking and jibing lessons are going to stick, I think. That said, it’s certainly alarming being in the galley and seeing the horizon dip and rise through the small doorway above you.

Thankfully, the storm soon passes and we arrive safely in Fiskardo on Kefalonia for the evening. It’s time to meet up with the other boats in what could loosely be called our “flotilla” full of trainees eager like me to get their RYA (Royal Yachting Association) certificates by the end of the week.

After a day out on the waves, it’s good to spend the evenings being sociable with the same crowd, getting to know each other over a few drinks. Genteel port town Fiskardo turns into a serious crime scene against cocktails (we hit them hard) – as the mojitos keep flowing, clumsy piggy back races along the waterfront seem like a good idea.

There’s just one problem … getting back to the boats. All moored up against each other, there’s a dinghy ferry to be negotiated and out of the darkness suddenly comes an ominous splash, and then a distinctive Irish accent, which I recognise as belonging to one of my drinking buddies from earlier. 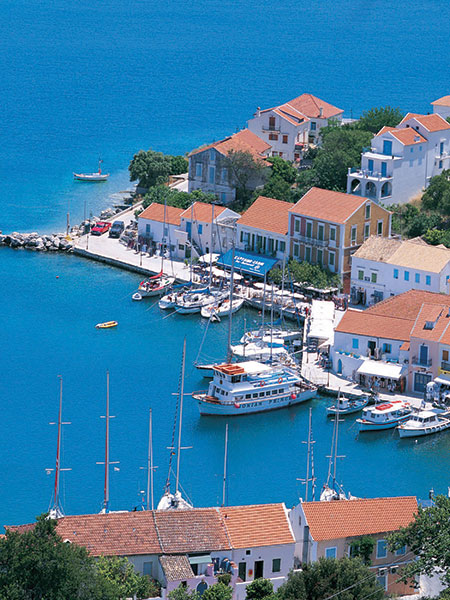 “Argh, I’m in the water!” he shrieks, before hauling himself out. Lesson learned, don’t go drinking with the Irish. The following morning, I sprawl out on the boat in the morning sunshine, frightened to move my sore head in case it starts pounding again.

When news arrives that a storm has blown in, meaning we can’t leave port today, I’m guiltily delighted – I can think of far worse places to have a hangover than Fiskardo’s pretty harbour, lined with tavernas and bars and a smattering of arty nick-nack shops.

Once we do begin our final leg back to Lefkas, I’m tested to see how much I’ve learned, and I’m pleasantly surprised how much has sunk in. I actually feel like a competent crew member now. The bustle of busy Nydri is a bit of a shock to the system after such tiny harbour stops.

Still, we’re in port for the final night and there’s a choice of bars and restaurants, so it would be wrong not to sample them, wouldn’t it?

A Learn To Sail week costs from £650pp with Sunvil Sailing, based on a shared cabin.

Fly from London Gatwick to Preveza/Lefkas from £198 return with Thomson Flights. 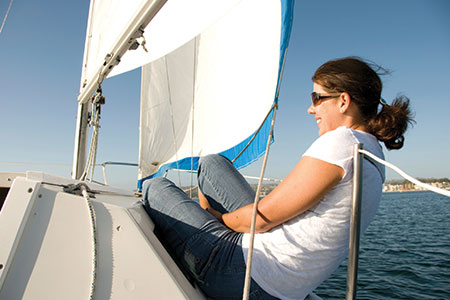 Budget A traditional harbourside taverna in Fiskardo, Irida has great views and offers a good mix of fresh seafood and local Greek dishes. The cheese pies are particularly good, as is the lobster. On chilly evenings they even offer you blankets. Main courses from around £6.

Midrange A cosy northern Italian-style restaurant specialising in seafood, Trattoria Vezene is located on the main harbourside at Vathi, on Lefkas, facing across the water to Skorpios. Simple food cooked from scratch using local ingredients. Main courses from around £10.

Luxury Stelio’s in Vassiliki, Lefkas, is on the docks, so a scenic place to spend the evening. The traditional Greek dishes are served in starter-sized (mezze) portions to mix, match and share. Each costs less than £3, or let them choose 10 appetisers and salads to share between two for £26. (Vassiliki waterfront, tel. +302 6450 31566) 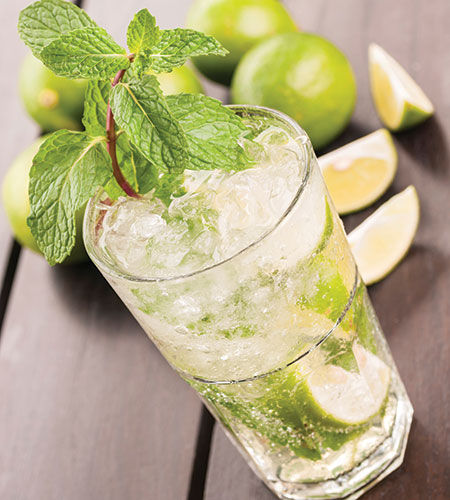 Budget At a great harbourside location with a balcony to watch the world go by, Theodora’s Café Bar has a relaxed, welcoming atmosphere and an excellent menu of cocktails (the mojitos are particularly good!). Expect to pay around £2 for a beer.(Fiskardo, Kefalonia, tel. +302 6740 41297)

Midrange 155 Cocktail Bar in Vassiliki, Lefkas, is smart and fashionable, with outdoor and indoor seating. It serves a variety of cocktails, drinks and specialty iced coffees, with laid-back tunes in the background. Cocktails from £6.50.

Luxury One of the only nightclubs in Nydri, Excess, plays a mix of music including garage, house, rock and even some Greek tunes. Nydri is a touch pricier as a rule, but Excess is good for late night revelry. Expect to pay around £3 for a pint of beer. 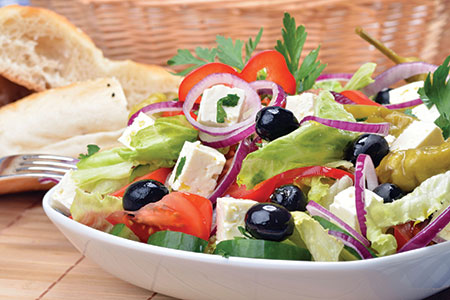 Budget Armonia Hotel is the land base for Sunvil’s sailing programmes. With its own pool, free wi-fi and seafront location, it’s a three-star hotel and a good option for an extra week before or after a sailing trip. Very close to the main entertainment area. From £40pppn. (Nydri, Lefkas, tel. +302 6450 92751)

Midrange Find bright and clean studios and apartments with air-conditioning, balconies and private showers on the north side of Nydri at Dionysos Studios. Just 100m from the nearest beach and 5 minutes’ walk from the town centre and bars.Studio apartments from £21.50pn.(Nidri, Lefkas, tel. +302 6450 92277)

Five easy ways to save your cash while living in London