It’s a goldmine: NZ’s historic Dunedin is a trendy and modern travel destination

You have so much sex that you throw out your little black book. You drink enough cheap beer to floor an elephant and live on a diet of toast supplemented by things out of tins and packets. You get discounts everywhere. And of course, the locals always hate you. Except in Dunedin, that is.

The folk of Dunedin love and adore students. In fact, most of the locals are students. Without students, this Scots-founded goldrush town might struggle to survive. With students, it offers all the fantastically cheap entertainment we’re all looking for: special offers, cheap accommodation, good public transport, lively bars and cafes, bargain shopping – with the advantage of being set on a glittering harbour in the middle of some amazing scenery. And there’s plenty of wildlife too.

When I was partying, sorry, studying for my degree, we never had dolphins on the doorstep. They’re might have been a few homeless drunks but there weren’t any arfing seals to share our chips with.

The high proportion of young, stylish people was the first thing I noticed about Dunedin. The grand architectural backdrop was the second. For a small town in the south of the wild and sparsely populated South Island it clearly once had big ambitions. In the 1860s, following the discovery of plentiful gold, Dunedin burst confidently into action, becoming New Zealand’s largest and richest city. 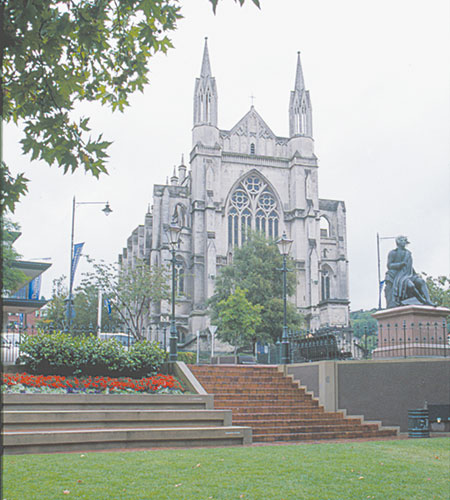 Giant Edwardian and Victorian edifices line the flat grid of streets, providing a wallpaper of pillars, steps, balustrades and frescoes. The central point, the Octagon, is an eight-sided square with a statue of Scottish poet Robert Burns in the middle. The railway station, a vast over-the-top confection of turrets, cloisters and porticos in contrasting-coloured stone, is apparently New Zealand’s most photographed building. Dunedin was clearly planned as a kind of south-sea Edinburgh. It even has a grand cathedral and a couple of hilltop castles.

The town fell on hard times when gold prices fell in the great depression, but since the 1980s the gold industry has begun to prosper again. If you want to check out the modern-day goldmines and even have a fossick yourself, ask at the tourist information centre on the Octagon. 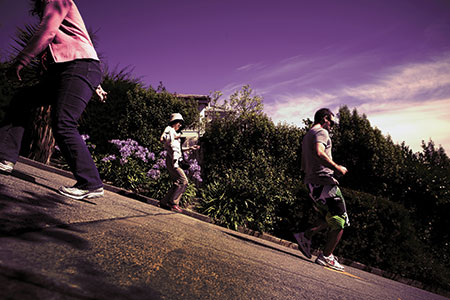 All I knew about the town when I arrived is that it has the world’s steepest street, which is on the outskirts of town. I was also dimly aware that it was the home of Speight’s beer, the “Pride of the South”, which issues abundantly from beer taps all over New Zealand.

The brewery started producing the liquid gold in 1876 and still continues in the same building today – you can take a half-hour tour around the place to marvel at vast copper vats and historyical exhibits before getting down to the real business: a beer-sampling sesh. Could you really turn it down? “Free beer, madam?” “Sorry, no, I’m hops intolerant.” You can even bottle, label and cap your own stubby to take home.

If you’re more interested in chocolate than beer, the town’s also home to one of three Cadbury chocolate factories in the world (the other two being at Bourneville in the UK and Hobart, Tasmania) where you can have a similar, though less historic and more sugary, tasting experience.

Armed with an inside knowledge of the local brew, we hit the bar scene. It was packed. Only the presence of students could account for how busy the bars were along Prince St on a school night, the main thoroughfare that bisects the Octagon.

Beanies and woolly scarves were shed to reveal high heels and sparkly tops. We found a grungy art-student bar with bizarre Icelandic avant-garde tunes and a great Japanese eaterie where we ordered a spicy miso noodle soup and free toasted-rice tea to go with our Kirin beer. 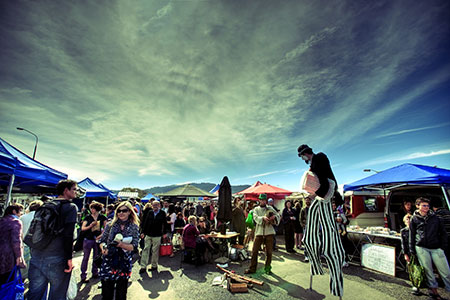 If it hadn’t been for the blessing of a gorgeous sunny day, we might have fancied a lie-in the next morning. But the Otago Peninsula is the town’s main natural drawcard and we had no more excuses not to make the short bus ride along the bay.

We caught a coach from the Octagon and sat down on the left-hand-side, where you get the best view of the landscapes. I’d imagined the peninsula as a wild and rugged landscape because everyone knows that seals and albatrosses like that sort of thing, but when Dunedin faded into rolling green hills and a flat, winding, harbourside road adorned with cute fishing cottages, I spent the entire trip along the peninsula wondering when we were going to get there.

Before I knew it, we were at the end of the peninsula and outside the world’s only mainland albatross colony. Like all albatrosses, the southern royal albatross likes to bring up its babies on the most remote, windswept, inhospitable, non-child-friendly island outposts it can find. Most southern royals live in a spot just like this in the distant Chatham Islands, but a few decades back a renegade splinter group decided to abandon the main colony and set up a new, smaller one in Dunedin. 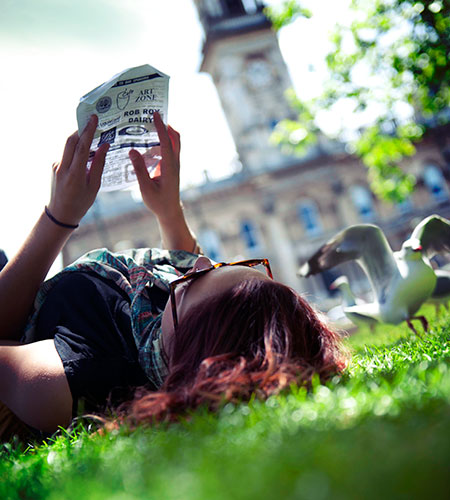 Here at Taiaroa Head the yearly cycle of the renegades is constantly monitored by both albatross experts and nosey tourists. It’s like watching a feathered version of The Bold and the Beautiful. After a video and Q&A session at the centre we were ushered through some doors and up the cliff, with giant albatrosses wheeling far above us, to an indoor viewing platform on the hilltop. There were plenty of binoculars, with which we could see several ungainly white fluffballs stumbling about on the grassy slopes below.

At the time of my visit, all the adult albatrosses were away on long-distance grocery-shopping trips and the kids were hanging around waiting. These big, gawky balls of fluff don’t have much to do but sit there, peck idly at the grass and waddle about being cute. They don’t even seem to be aware of each other’s existence, as the nests are quite far apart. Apparently we’d be lucky to see an adult albatross return, as they only make one short visit to the chick a week.

But we saw heaps. There we were with our binoculars, when a huge shape suddenly passed across the sun. We all looked up, madly fishing for cameras, as several full-sized albatrosses glided past the window at startling speed.

They’re huge. They can wheel and hang in the air without a single wing-beat, and land with the grace of a 747. And did I mention they have a wingspan of 12ft?

Albatrosses now join my list of favourite birds. On land, and in their behaviour, they can be quite comical, but see them soaring over the waves takes the smile from your face. I can see why they’re called “royal”. 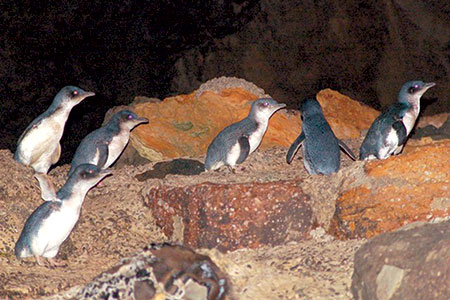 Also on the area’s bird-watching agenda is the world’s smallest penguin species – the blue penguin – pockets of which can be found all around New Zealand. There’s a colony on the Otago Peninsula and another one 90 minutes up the coast at Oamaru, which offers easy access to the super-cute critters.

They come ashore each night, making a right racket as they stagger around in their tuxedos, schmoozing and fighting over who gets which bed. Every evening, about 200 birds waddle out of the surf and on to the beach and I had to wonder how these little fellas can survive in such a big, angry ocean.

The Oamaru penguin colony is in an old quarry near the harbour which was set up as a conservation area for the penguins, seeing their numbers quadruple in a little over 10 years. The penguin people take you out at nightfall to a viewing area, and special lights mean you can see what’s going on without the penguins getting all confused about what time of day it is.

It’s almost exactly like watching a raucous bachelor party – with flippers. They’re so unbelievably cute that I found my normally kitsch-eschewing self wanting to buy a cuddly penguin from the gift shop.If the students, penguins and albatrosses are all such die-hard party animals, then kissing people, waddling from place to place and making plenty of noise is clearly the thing to do around here.

Who am I to argue? If you can’t beat them, you might as well head to the nearest bar and get to know the local wildlife. Arranged in my finest plumage, I preened myself in the mirror, spread my wings and did just that.

Stork arrested and detained by police in Egypt, accused of being a spy