Jedward gyrate in shocking Jexy And I Know It video

Thought you’d seen the last of Jedward? Think again. Thought someone might have seen sense and pushed them – for the sake of humanity – down a rather large hole and left them there? No such like.

Yes, just as we had all been well on our way to fooling ourselves into thinking that Jedward was a figment of out imagination, a painful blip in reality in which a nightmare managed to cross from the other side in to our waking world, the duo are back. And if there’s only one thing worse than Jedward, it’s a naked Jedward thrusting their crotches at you, as they do in their new video, Jexy And I Know It, a spoof of the LMFAO track Sexy and I Know It. 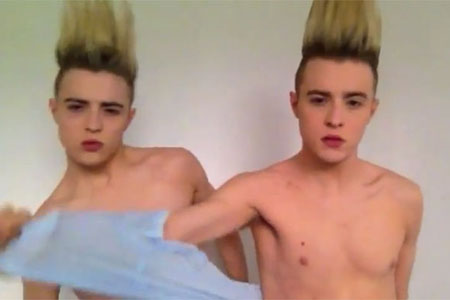 The X Factor brothers wrote on Twitter, where they have been furiously pushing the video: “ALL THE FANS WANTED US TO DO THIS AND WE DO WHAT ARE FANS WANT. IT WAS LOADS OF FUN EVERYONE CHECK IT OUT! JEDWARD.”

Whether you do is up to you, but take it from us, you have been warned.