Jerusalem in 48 hours: Must-see sights, shopping areas and eats in the Holy City

09:00 Coming from Ben Gurion airport, the city suddenly appears before you, the golden Dome of the Rock (Temple Mount) gleaming at the centre.

It’s a thrilling introduction to a place that’s charged with symbolism and significance for a huge number of people.

Start off your day with an Israeli breakfast of shakshouka, a spicy tomato stew baked with eggs and served with fresh bread, usually shared between two. Restobar serve their tasty version with a sausage (from £9.50, 1 Ben Maimon Street, + 972 02 566 5126).

11:00 Whether or not you have a religious background, you’ll be itching to get to the Old City as quickly as possible to see the holy sites that are worshipped by Muslim, Jewish, Christian and Orthodox faiths.

The main entrance into the Old City is through Jaffa Gate (Jaffa Road) and from there you can wander through narrow stone streets, passing shops that sell religious souvenirs – think tea towels printed with Jesus Christ’s face and bottles of holy water.

12:00 Start in the Christian Quarter at Via Dolorosa, the steep road along which Jesus is supposed to have carried his wooden cross before being crucified. 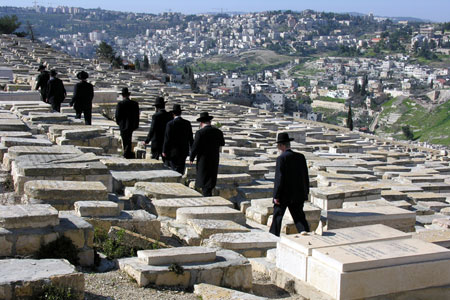 If you arrive at the same time as one of the many pilgrimage tours which run there, you’ll see the bizarre sight of tourists from all over the world carrying their own huge crucifixes.

13:00 Make your way to the nearby Church of the Holy Sepulchre, a pilgrimage site since the 4th century AD, which is believed to be where Jesus rose from the dead. You’ll see the devoted kneel to kiss his tomb with immense reverence.

14:00 Move on to explore the Jewish Quarter of the Old City, which is where you’ll find the famous Wailing Wall.

Dating back to 20BC, this is all that remains of the sacred Jewish Second Temple, which was destroyed by the Romans in AD70.

You don’t have to be Jewish to approach the wall, but you do have to dress modestly, and there are different sections for men and women.

Some worshippers write prayers on paper and stuff them into the cracks of the stones – they leave the wall walking backwards so they don’t turn their back on it.

You’ll also see plenty of visiting school kids having a whale of a time observing this tradition to a fault. 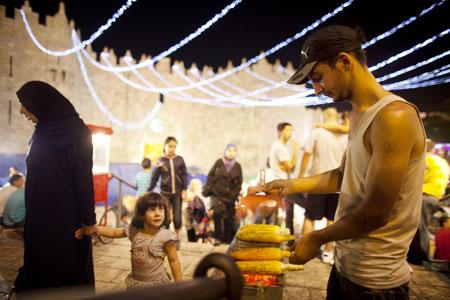 16:00 You’re now very close to Temple Mount, which is one of the most contested religious sites in the world.

The iconic Dome of The Rock is said by Islamic scholars to be the place from which Muhammad ascended to heaven, as told in the Quran. Non-Muslims are not allowed to enter during prayer times or Muslim holy days.

The Foundation Stone, which the temple is built on, is the holiest site in Judaism – Jews pray towards this landmark in the same way Muslims pray in the direction of the Kaaba at Mecca.

19:00  After such an intensely historical and spiritual day, it’s time to wind down with a few drinks back in the New City. Mike’s Place (drinks about £4) has cheap drinks and a lively buzz.

There are often bands playing downstairs, too. This was the first in an Israeli chain. 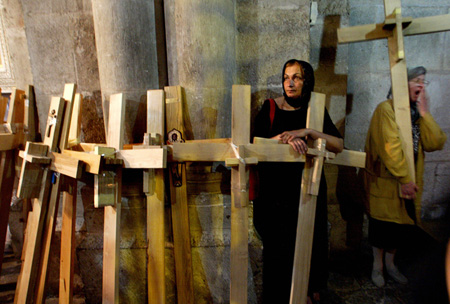 10:00 Start the day with breakfast near Zion Square (Jaffa Street).

This area represents the wealthiest, most modern side of Jerusalem and is a great spot for people watching, as you’ll see young students, professionals shopping and Hasidic Jews going about their business, while buskers provide the soundtrack.

12:00 Do your own shopping in the fashionable, artsy shops and boutiques around Ben Yehuda Street. Many of the gift shops here sell beauty products made with mud from the mineral-rich Dead Sea – they are far cheaper here than they would be back home.

14:00 Head to the east of the city, where a large number of the population are Muslim Palestinians. It’s much poorer and more ramshackle in this area.

16:00 Walk on to the Mount of Olives, a mountain ridge east of Jerusalem’s Old City. This has been used as a Jewish cemetery for over 3000 years and holds about 150,000 graves. It’s a great place from which to view the city below.

18:00 Head to the west of Jerusalem for dinner at Village Green (mains from £8, 33 Jaffa St, +972 02 625 3065), which serves delicious vegetarian food, including giant stuffed peppers, healthy salads and vegan chocolate cake.

This is also a good place to drink beer at the plastic tables outside until sundown.

A taxi from the airport to Jerusalem will cost you approximately £50.