The Kangaroos and Kiwis were deadlocked 6-6 at halftime at Canberra Stadium, but once the deadlock was broken at half time it was all over.

An unlucky New Zealand had three tries turned down by the video officials in the first half, which would have clearly changed the game, and Aussie coach Tim Sheens knew it.

But in the second period, Australia was too good in a block of 11 minutes that yielded four tries.

Aussie halfback Cooper Cronk scored the first try, before the Kiwis eventually got one that the referees were willing to allow right on half time through fullback Josh Hoffman.

“The try on half-time maybe shook us up a bit,” Sheens said.

Kiwi coach Steve Kearney thought, and most would agree, that his boys were hard done by in the first half.

“I thought we deserved a bit more reward for the effort in the first half,” he said. 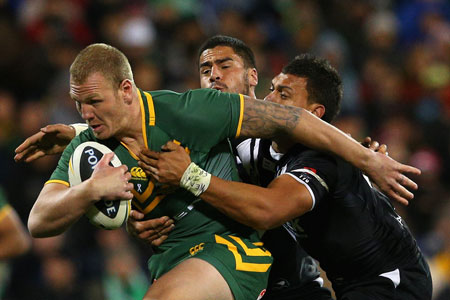 A controversial Greg Inglis four-pointer began the surge in the second half, followed by Brett Morris took advantage of a Luke Lewis break to make it 16-6.

“I can assure you that’s not easy,” captain Cameron Smith said.

The sides will next meet in Cardiff in October during the World Cup – the Kangaroos will be well aware revenge will be on the menu.

“Most of them have one leg on the plane,” Sheens said.