It’s got one of the best line-ups of the summer and it’s free – the Beeb have pulled off, again, another fanastic summer fest that has acts to please all, whether you’re an indie kid, an R’n’B devotee, a pop fan, or just an all-round appreciator of good music.
With six stages and more than 100,000 people expected to roll up, this isn’t just the BBC’s biggest summer show, but one of the biggest London events of the 2012.

Jay-Z, who’s curating his own US music fest Made In America later this year, ventures to these shows once more, having recently rocked the O2 with Kanye on their Watch The Throne tour, to headline on the Saturday, with support from Kasabian, Ed Sheeran and Example. Jack White tops the bill in the In New Music We Trust stage, along with The Vaccines and The Maccabbees, with Sean Paul, Swedish House Mafia, Calvin Harris and deadmau5 across the 1Extra Stage and Dance Arena, too.
Chase and Status bring their arena-slaying drum ‘n’ bass to the Sunday night, along with Magnetic Man, Sub Focus and Lana Del Ray, with Nas, David Guetta, Flux Pavillion, and even BBC alumni Annie Mac (Sat) and Zane Lowe (Sun) getting in on the act and spinning some discs as well.

The good news – tickets are free! The bad news – they’ve almost all been allocated through an online registration process, which closed ages ago. Listen to Radio 1 this week and you might be able to get your mits on some, though.

More than just an electronic music fest, this new London two-day event features an eclectic line-up that includes everything from electro-deity Gary Numan and drum ‘n’ bass-techno pioneer Squarepusher, to experimental noise-rockers Battles. Snoop Dogg (below) headlines the Saturday with back-in-business Orbital set to slay Sunday night. With new capital venue London Pleasure Gardens, near the Olympic site, playing host, this is a festival calendar addition to get truly excited about.

First he ditched Meg, then the rest of the various bands he was in, and now he’s out there as a solo star – a one-man blues-rocking machine. Debut solo LP Blunderbuss was pretty ace, and he’s sure to throw in a few Stripes tunes, too. Can’t make tonight? He’s at the Hammersmith Apollo tomorrow night, as well. 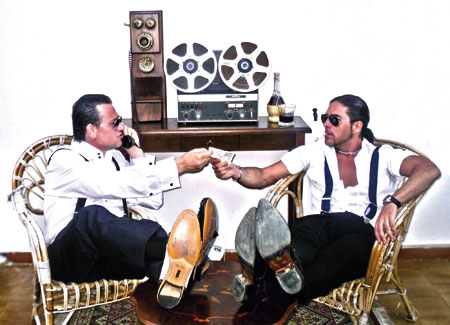 Heavyweight House handpicks DJs and producers from across Europe for this horizon-broadening, genre-stretching night of top tunes and superior sounds. Italy’s Phunk Investigation (above), Slovenia’s Beltek, and Germany’s Miles Dyson are among the highlights at this 3000-capacity superclub.

Not the Clapham Grand afternoon booze-athon, but a short, sharp taste of post-dubstep, garage and drum & bass invention, plus special guests each and every week. Dark Sky, Mele, Hackman, Mickey Pearce, Brackles, Akkord, Maribou State, Seb Wildblood and Apes all feature this time out.

Housse De Racket, Jupiter, Punks Jump Up and mixmasters Gildas & Jerry Bouthier are spinning the tunes at this launch party for the French label’s summer mixtape, featuring the likes of Metronomy, Citizens and Trentemoller. Get your sun-kissed vibes on!

The buzz so far Soft and gentle, with slow-build dynamics, this Bristol five-piece’s sound is as modest and heartfelt as it comes, built around swirling vocal harmonies and warm, soulfull guitars. The band’s early material was born from twin vocalists Chris Hillier and Robin Southwell’s six-week busking tour of Europe. Their latest, self-titled EP’s a perfect partner to laidback nights.
The Critics say: “If these tracks are anything to go by, they’re set to make serious waves in 2012.” SpindleMagazine.com
The plug: The Bronze Medal out July 2 via New Music Club. They play The Barfly. June 28. 7pm. £7.50  NW1 8AN Tube: Chalk Farm  barflyclub.com

Cirque du so sexy: The hottest circus shows in London this summer