Mild bitching about the Olympics is no more surprising than complaining about the weather. However, with reports of costs exceeding their £9.3bn budget, forced evictions and sponsors using sweatshop labour or having links to environmental disasters, some Londoners are taking a more serious view. In February, Mark Ronson and Katy B turned up in Hackney Wick, east London, for the unveiling of a Coca-Cola-sponsored Olympics mural. Three days later, it was vandalised. “I was on my way to work a couple of mornings after the mural was finished and there were two guys on the street in their pyjamas throwing paint at it,” a woman who lives nearby said.

For other Londoners, the Games have disturbed their lives to such an extent, they’re preparing to take to the streets to let their feelings known.Umbrella organisation Counter Olympics Network (CON)’s spokesman Julian Cheyne was evicted when his home in east London’s Clay’s Lane estate was demolished to make way for the Olympic park. “London 2012 should be renamed Lying 2012,“ he says. “The state knows that the Olympics won’t deliver the results they are promising. The event is really about trying to take over a large piece of east London as a prime opportunity for property developers.”

He has an ally in author Anna Minton who, on July 5, as part of the Southbank Centre’s London Literature Festival 2012, will join a range of speakers, including writer Will Self and sociologist Saskia Sassen to discuss the impact of the Olympics on London.
“My concern is that the much-talked-about legacy will just create enclaves of development that the local community will be cut off from,” Minton says. She is particularly angry about the privatisation of development, including the fact that the Queen Elizabeth Olympic Park – supposed to become a public park – will be run by private companies.

Within the CON, groups target specific issues, such as preserving Leyton Marsh (saveleytonmarsh.wordpress.com); opposing Dow Chemical’s sponsorship of the Games over its link with the Bhopal gas leak that killed thousands in India in 1984 (dropdownow.org); highlighting the environmental record of Olympic sponsors BP (greenwashgold.org); and calling for Team GB kit-makers Adidas to end its alleged use of 34p-an-hour sweatshop labour (waronwant.org). 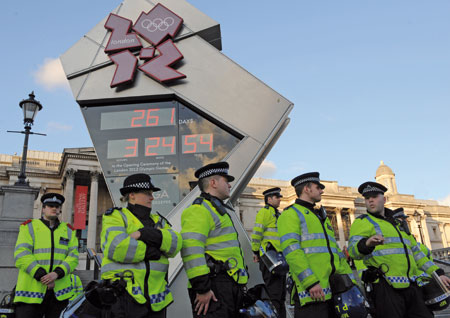 During the next few weeks, expect to hear of a series of demonstrations, the largest of which has been organised by CON for July 28, the second day of the Olympics. The event is a “family protest”, Cheyne says, but one taking place on the doorstep of London 2012, with a march planned between Mile End and Victoria Park. Groups attending the protest are only loosely affiliated and have different agendas. Our Olympics (ourolympics.org), another anti-Games hub, is also promoting the July 28 event, but with a more radical call to action. In a statement, the group said: “We believe it is time for us to come together and make London 2012 the greatest act of non-violent civil disobedience of our time.”

And, separately, the Informal Anarchist Federation (9325.nostate.net), a group that claimed responsibility for sabotaging railway signal cables in Bristol, is vehemently opposed to the Games and has promised to “use guerrilla activity to hurt the national image and paralyse the economy however we can. Because simply, we don’t want rich tourists – we want civil war”.

Threats such as this have led to Olympic organisers increasing the number of security guards from 10,000 to 23,700, hiking the cost up to £553m. And during the Olympics, there will be more armed personnel patrolling the capital than the entire number of British troops serving in Afghanistan. Right now, the backgrounds of up to 500,000 people are being screened and those thought to be planning any disruption will be pre-emptively arrested, according to Scotland Yard.

“The right to protest is part of our culture and the sign of a true democracy,” says assistant commissioner Chris Allison, who is in charge of Olympics security. However, it does not give people the right to prevent the Games from happening, nor stop the millions of ticket holders from being able to witness this great event.”

Another hot issue for many Londoners is the proposed installation of surface-to-air missiles on residential flats during the Games. “The missiles will be stationed in and around a densely populated community,” says Stop The Olympic Missiles campaigner Jakril Hoque, 27, from Mile End. Residents who aren’t really interested in the bigger picture are getting involved in this campaign because they feel they are at risk.” 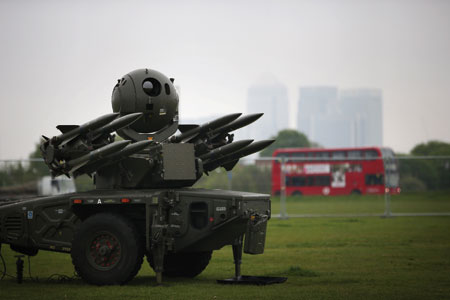 Hoque says the group’s aim is to make the Ministry of Defence rethink its position. But, if the missiles are deployed, he says protests, including human barricades, may take place. However, despite the talk from CON, Stop The Olympic Missiles and a few fringe extremists, the rumoured unease many Londoners seem to feel about the Olympics has not led to vast numbers of residents turning up to protest.

Samantha Hooper, a 25-year-old PR executive, was forced to move out of her Whitechapel apartment when the landlord whacked up the rent for the Olympics. But she’s not letting it turn her against the event. “I’m still open to being persuaded that the Games are a good thing for Londoners,” she says. “That’s what I want to believe.”

And sociologist Saskia Sassen, who will debate the Games at the London Literature Festival, is also optimistic. “The teams in charge of both the original planning and the post-Olympics plan have learnt from the mistakes of past Olympics,“ she says. “They have understood that the legacy is not only a matter of new infrastructures and athletic facilities, but also a question
of the tissue of community.“

Still, CON’s Cheyne is determined there remain plenty of Londoners, like Hooper, who are disgruntled, but reluctant to speak out against the Olympics, hoping the Games and its legacy really will be a boost for the city. For others, though, he believes more sinister fears may be a barricade to them protesting.

“There’s a permanent feeling that if you protest, you might be visited in the middle of the night,” he says. Indeed, some have already fallen foul of the law.  In April, Simon Moore, 29, was arrested, along with five other protesters, for sitting in front of a truck to stop the construction of the basketball court at Leyton Marsh. He was served with an ASBO and is now banned from being within 100 yards of Olympic venues, participants, officials, spectators and the Olympic torch route.

But such dissent is nothing new. In 2010, the Vancouver Winter Games was hit by riots; in 2004, anti-Olympics protesters joined the already-striking workers at the Athens Olympics and during Mexico City’s 1968 Games several protesters were shot dead.
Despite the vitriol, most London protest groups say they are not planning to disrupt the Games. Cheyne describes a recent exchange with a pro-Olympics gallery owner. “Her opinion was that it should go ahead, whatever the cost,” Cheyne said. “So I just said to her, ‘Enjoy the Olympics’.”

Finding it hard to make friends in London? Relax – here’s how to meet some mates…

Dip your toes in the San…