Keep on rocking: The Camden Crawl 2012

The organisers of The Camden Crawl have an eye for spotting musical talent. Gearing up for its 11th event, the festival has become synonymous with acts that are on the tipping point of stardom. It was a case of “Adele who?“ for many as the singer took to the stage in 2007, and Florence + The Machine and Mumford And Sons were only just on the general public’s radar when they performed in 2008.

Back when founder Lisa Paulon established the festival in 1995, Britpop was in its heyday, with Oasis and Blur battling to rule the airwaves. But it was exposure for the less mainstream bands, the underground acts music lovers were flocking to see, which drove their desire to create the event.

“We came up with this brainchild of combining our individual tastes and decided to do one big gig with all our favourite bands and to try and keep it as affordable as possible,” she says.

“And that kind of democratic way of doing it, keeping it really accessible, gave us motivation and has remained
a thread throughout all of the events since.”

Although between 1998-2004, The Camden Crawl was put on hold, it now ranks among the largest of Europe’s multi-venue festivals in terms of the amount of groups it attracts.

A weekend ticket (May 4-6) will give music fans access to some 340 acts at 50 neighbouring venues in Camden and Kentish Town. 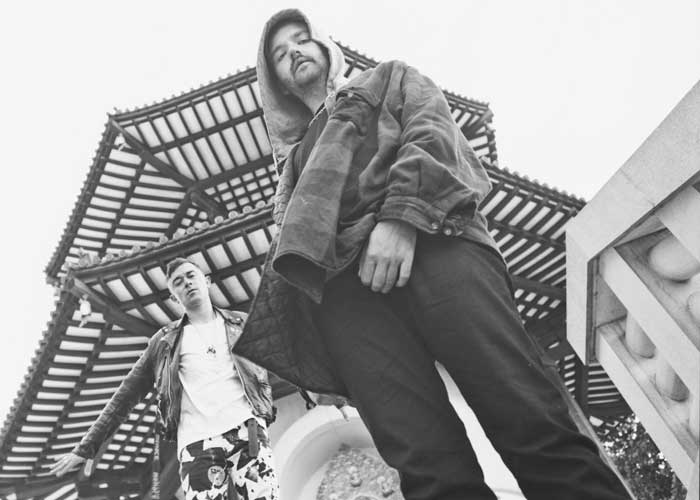 And the talent is booked by an eclectic committee of tastemakers, so a wide range of performances is guaranteed – from the lesser-heard-of grime artist Durrty Goodz and indie rock trio Johnny Foreigner, to the more well-known former Supergrass frontman Gaz Coombes, and psychedelic – electronic band Death In Vegas.

UK electro-rockers The Big Pink (best known for Dominoes, that catchy piece of work Niki Minaj ended up sampling), are promising to get the crowd jumping at their Koko gig on Saturday.

Having just returned from an America tour, which featured gigs on both coasts and a slot at the Coachella Festival, where they partied alongside Snoop Dogg and his posse, experienced musicians Robbie Furze and Milo Cordell are champing at the bit to play The Camden Crawl.

“It’s been amazing to have 4000 people all waving their hands, singing your songs,” vocalist Furze says. “It’s definitely contributed to the feeling of positivity and energy we have now.” He says festival-goers should expect a lot of fun, both at the band’s gig and the event itself.

“It’s like a big street party at the Crawl. You can go into anywhere and end up having a good time. We’re up for having a lot of fun. We’ve never played Koko before but have seen lots of bands there. It’s going to be a pretty intense show,” he adds. 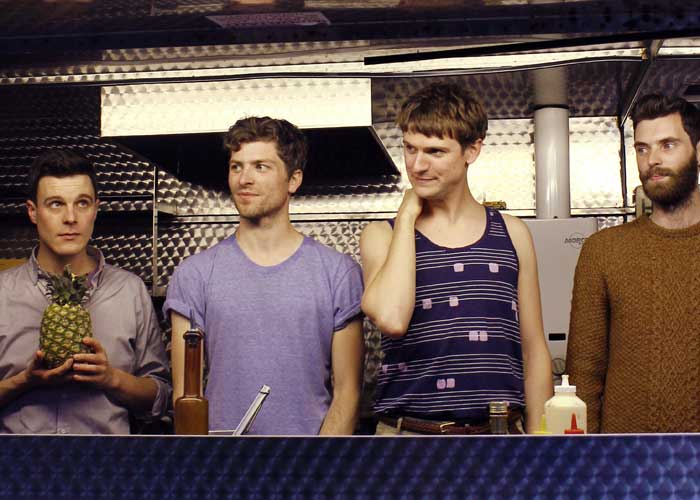 At the other end of the experience spectrum are up-and-coming east London four-piece Cymbals, who began playing house parties only two years ago, with a drummer who had never been behind a kit before and two members who didn’t have a background in music.

“It meant we had to major in soul,” frontman Jack Cleverly explains. “Everything had quite a lot of heart. It was always quite a shambles when we started out, but I think people were always rooting for us. We somehow seemed to get away with it. And we’ve always maintained that living-in-the-moment feel and not got too cerebral about things.”

It’s paid off, as the band have developed a growing following through social media, and will support Aussie rockers Temper Trap for five UK gigs, including Koko, next month. But first there’s the matter of the Crawl.

“We’ve been keen to grow up and take our time in east London up until now,“ Cleverly says. “Camden’s almost like a kind of old rock institution, which is a bit foreign to us. It’s like a bit of an adventure for us to go and play there. 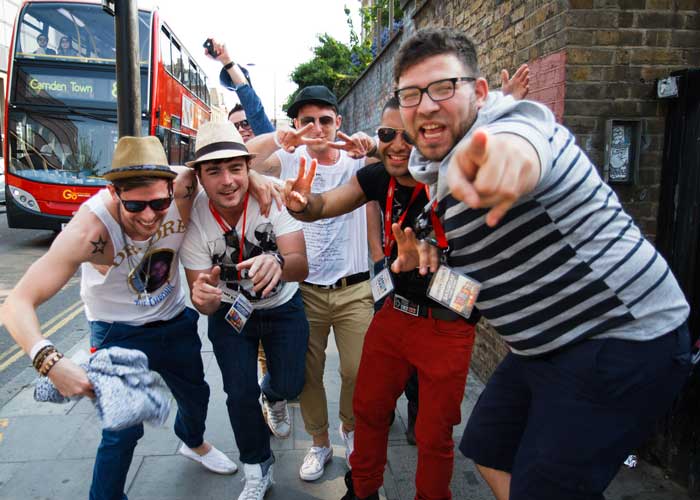 “Whenever we’ve played at Barfly, it’s kind of like going over to another city. It’ll be really fun. We haven’t been to The Camden Crawl before, so we’re absolutely excited to be part of it alongside some really great bands. Just being with them will really lift our playing. It’s going to be another exciting adventure.”

Although The Camden Crawl is best known for putting on  an impressive show when it comes to muscial talent, this year also sees an array of other creative mediums on display.

For the first time, it’s added C.A.M.E to its line-up – an exhibition showcasing the alternative arts of underground press and zine making. It’s all on the rooftop of Camden’s historic St Michael’s Church.

And during the day, the festival boasts an impressive selection of spoken word acts, performing arts, as well as
a host of club nights presented by the likes of Last.fm, Supa Dupa Fly, Eddy Temple Morris and Moda. 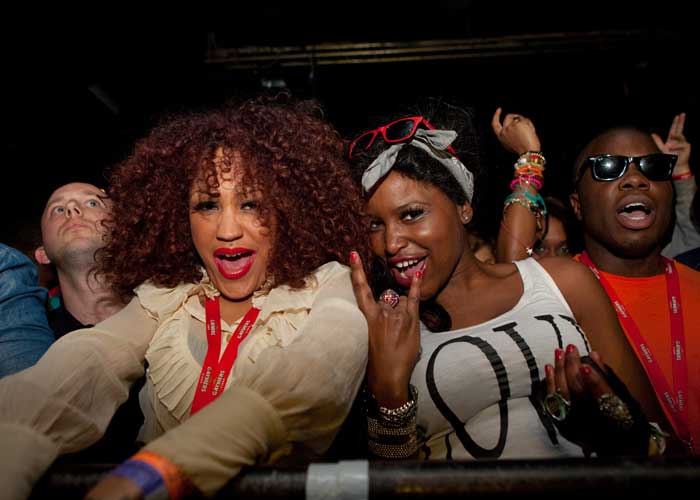 From midday to 7pm on Saturday and Sunday, get ready to hold your sides, as the comedians take to the stage. One to watch will be Hip Hop Shakespeare, performing a medley of songs inspired by the Bard’s plays and sonnets. While, on Sunday, The 99 Club will be hosting a stage for the first time at the Camden Rock, with stand-up from Matt Gree, Suzi Ruffell, Jo Bor and Patrick Monahan.

Such a range of entertainment is testament to The Camden Crawl’s organisers’ desire to make the event as inclusive and ecletic as possible, to grow a community of artists and their fans.

“We’ve now got 35 different curators that range from folk and dubstep, to grime. We’ve got labels and producers and even Big Cheese Magazine,” Paulon says.

“Everyone’s a specialist in their area, so we’re trying to represent all kinds of music and draw upon all types of audience social groups. You definitely can’t say it’s all about indie anymore.”

As for her favourite memories over the event’s 17-year history, Paulon recalls watching former Blur guitarist Graham Coxon and English punk legends the Buzzcocks play on the same night in 2005.

“I remember running from one to the other, and I just made it to the Electric Ballroom as the band came on,“ she says. “The whole place exploded. I remember this whole crowd of 20-somethings just going crazy for this band who were all in their fifties. It was brilliant.”

It’s moments like that which make attending The Camden Crawl a no-brainer. From legends to next-to-make-it new-comers, you don’t know who you might see. ❚ 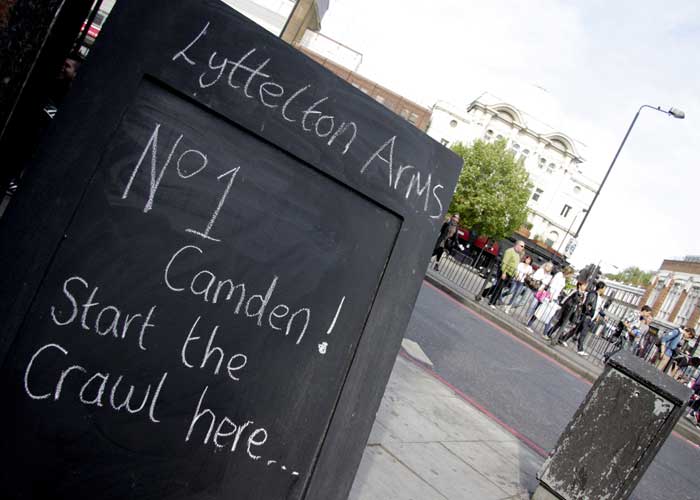