A Kenya safari can be done on a budget. Get closer to the wildlife and save money by enjoying a do-it-yourself trip. Amy Adams explores…

Driving up alongside three grazing white rhino is not the best time to discover that my window doesn’t wind down. As I furiously scrub the dusty glass, my taxi driver, Mwaka, urges me to open the door. I’m about four
metres from the nearest rhino and the only thing between me and this bulky grey mass is a digital camera.

“That one’s getting angry now,” advises Mwaka as I hurriedly shut the door. Our safari vehicle of choice might not boast all the mod cons, but opting out of an organised trip and doing it yourself can lead to an up-close-and- personal and experience with the African wildlife.

My alternative safari starts at Hell’s Gate National Park by Lake Naivasha in the Rift Valley, an hour from Nairobi. I hire a bike at Elsa Gate for KSh500 (£4) and pay the park entrance fee of KSh2100 (£15). 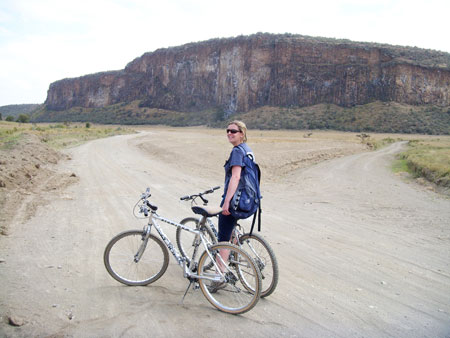 The sandy terrain doesn’t make for an easy ride but all is forgiven when I round a corner and see a waterhole crowded with zebras, their black and white stripes startling against the earthy backdrop. Around them waddle wart hogs, waiting their turn to quench their thirst.

In the other direction, a fellow cyclist spies a giraffe. As we get nearer, we spot another, and another, until a family of four reveals itself. They slope off into the trees, their long necks becoming slanted trunks and their patches of brown fading into the undergrowth. Their movements are so otherworldy, it’s like I’m cycling through Jurassic Park.

The scenery in Hell’s Gate Gorge adds to this notion as I pedal through it, flanked by walls of jagged rocks shooting straight up. The road leads to Central Tower where we leave our bikes and explore the sandstone corridors and geothermal springs of the Lower Gorge. 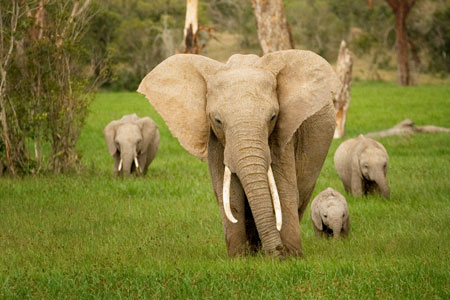 The dipping sun softens the colours, the Thomson’s gazelles are silhouetted against the sky and vervet monkeys greet me – one mother deftly negotiating the cliff-face as her baby clings to her back – as I emerge from the gorge back at Elsa Gate.

The next day I see a woman with a baby using similar co-ordination as she squeezes on to a matatu. With blaring hip- hop and passengers hanging out the door, these minibuses may not be the most sane way to travel but they sure are cheap and cheerful. I use one to get to Naivasha town and then on to Nakuru, where I land in a chaotic market place.

Some fierce haggling later and I find a taxi driver willing to take me on a three-hour tour of Lake Nakuru National Park for KSh3500 (£25) plus the pricey park fee of US$60 (£36). This safari might not be peanuts, but it’s surprisingly cheap; I had budgeted to pay far more.

Overlanding through Kenya and Tanzania

Kenya’s second most-visited national park is home to the aforementioned rhinos, as well as lions, leopards and a huge lake glittering with fluorescent flamingos. Only up close does the blur of pink reveal individual birds, each beating their wings to create a loud chorus. Nearby, two African buffaloes wade in the shallows, a couple of tiny birds perching nonchalantly atop their heads.

From the lowest point of the park we head to the highest, Baboon Cliff. Here the flamingos are a pink belt around the lake shore, stretching out to mountains that are hazy in the hot air. It’s while Mwaka and I are gazing at the gazelles gambolling across the savanna and the pattern of well-trodden paths leading to the water hole – that a baboon climbs in a window of our empty car. A few well-aimed missiles from Mwaka and it soon scarpers. 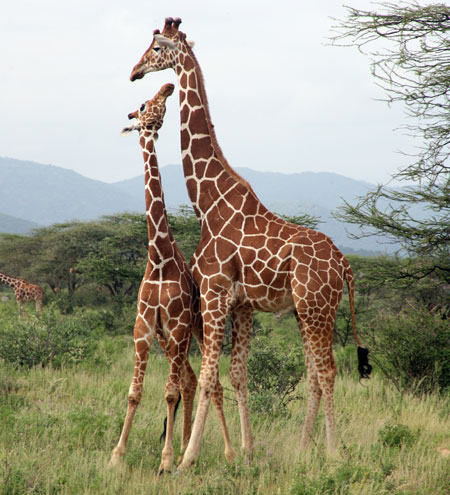 Back on the open plains, the flat-topped acacia trees thin out. There may be no lions or leopards in sight but the African landscape is putting on a good show. Storm clouds gather in the huge sky, turning the lake midnight-blue and making our taxi seem very small. Rain starts to tap on the rooftop. Who would want to be in an open-topped safari truck now?

If cycling past giraffes is a surreal experience, then walking with them is something else. At Crater Lake Game Sanctuary back near Lake Naivasha we pay an entrance fee of KSh700 (£5) and the park is ours to roam free among the giraffes, zebras, impalas and Thompson’s gazelles. 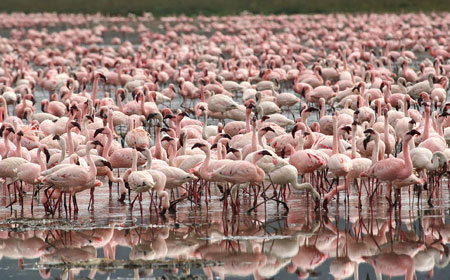 A group of giraffes snacking on the trees keeps a wary eye on me as they chomp. I stand and watch in awe before they are startled by a distant car and gallop away in a strange, slow-motion fashion that shakes the ground.

On my way to the jade crater lake I spot the strangest bird I’ve ever seen, marching across the open grassland. With an upper body like a majestic eagle and lower half like a spindly stork, it seems to lunge with each step. According to my guidebook, it’s a secretary bird, known to walk up to 20km a day.

Despite the angry rhino, the munching giraffes and the thronging, luminous flamingos, it’s an unexpected highlight, and something I probably wouldn’t have spotted from a flash 4WD.

WHEN TO GO: January and February are the most popular months, due to the hot dry weather. You can go any time, but avoid the rainy season (March to the end of May).
GETTING THERE: Kenyan Airways, British Airways and Virgin Atlantic offer direct flights to Nairobi (from £400 return, 8.5 hours). Indirect flights with Swiss Airways start at £360 and take about 14 hours. Regular flights from Nairobi to Mombasa take one hour (from £80 return).
GET MORE INFO: magicalkenya.com

Album review: Laura Marling – I Speak Because I can