Khan you kick it? The best of the Trans Mongolian Express

I’ve even lava-surfed down a live volcano in Nicaragua and been shot at by drug dealers in downtown Denver. But I don’t think anything could have prepared me for the sheer terror of being challenged to down a full glass of fermented sour camel milk vodka by a wrinkly, octogenarian goat herder on the semi-arid wild steppes north of the Gobi Desert.

I arrive in Mongolia after a whirlwind trip from Moscow on the TransMongolian Express train. Taking six days straight to cross the 7621km from Russia to China, I’d booked a second-class ticket (kupe) and found myself in a lower bunk sleeping couchette in a four-bed cabin. My fellow passengers were two Russian soldiers on leave, both of whom spoke little English, and a salesman from Novosibirsk, south-west Siberia. We began by communicating with hand signals, but within hours, they were sharing meat-and-potato pies and toasting to my good health with vodka.

Drinking the crystal-clear alcohol may be synonymous with Russia, but the Russians have nothing on their southerly neighbours. The Mongols consume vast quantities of the beverage and even the production of Mongolian vodka is a more elaborate affair. Commonly, their milky-white coloured drink is filtered through a cloth and decanted into a large open leather sack, known as a khukhuur. Like its close cousin airag, made from sour mare’s milk, it is an ever-present national drink. Sharing a cracked teacup full of this potent spirit is a quintessential Mongolian experience: it is hard to stomach but impossible to forget. The taste is akin to month-old milk mixed with vomit and stomach acid. 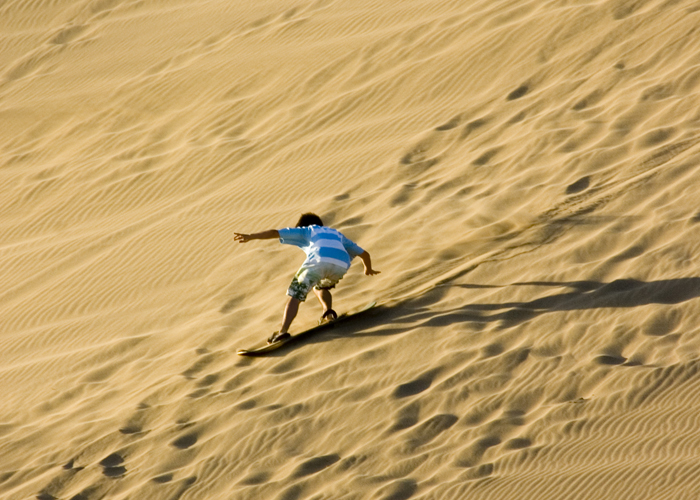 Pre-Mongolian hangover and still naïve to the evils of fermented camel milk, I start out from the capital of Ulaanbaatar’s Golden Gobi Hostel, run by affable family team Uugii, Soko and Baysaa. Like many before me, I want to embark on a cross-country trip to discover why the country is known as ‘the land of the blue sky’. My plan is simple: drive in an anti-clockwise circuit for 21 days with four fellow travellers seeing the best the country has to offer. We have a van and a local guide (organised by the hostel with 48 hours’ notice for £200pp – price depends on number of people, length of trip and haggling prowess), and an entire country to traverse.

It turns out to be an epic journey. We see ice-canyons, fossil-filled deserts, and glaciers that are so large, they roll beyond the western borders into Kazakhstan. We hike, bike, fish, camp and camel trek, but top of our list is to visit Genghis Khan’s birthplace in Karakorum, sandboard in the Gobi Desert, and go horse riding across the famous Mongolian steppe.

Horse riding is a must-do in Mongolia. It is an inspirational setting in which to learn and Mongolians take their favoured sport deadly seriously. The night before leaving the capital, I meet a French traveller who has bought a stallion for £370. His plan is to learn to master it, and then travel solo, cross-country to the Altai Tavan Bogd National Park in the west. I ask him why. “Because in Mongolia I can,” is his simple reply.

The scourge of god

That horse riding is a way of life in Mongolia should come as no surprise to those who know their history. Genghis Khan, or ‘world conqueror’, ‘emperor of all men’, and the ‘scourge of god’ as he called himself, rode his horse from the central steppe to India and China, before overthrowing the Turks and every ruler in his path from Kiev to the Korean peninsula. Chinggis, as the Mongols call him, also killed his half-brother in cold blood for stealing one of his fish when he was only nine years old. Strangely, legend has it that he was afraid of dogs.

Today, Genghis Khan’s legacy is celebrated in a million and one different ways. There is Genghis-branded pizza, cigarettes, bus companies, makes of toilet paper and even a carpet factory selling Genghis-approved linoleum and rugs.

It is outside of the capital, however, where things get more unpredictable. Our first three days are spent criss-crossing between one-horse towns and nomadic camps. At our first stop, every villager rushes to greet us (population 26 people, 50 sheep, 250 goats) and, during our second, a young child rides down the village’s only street bareback to welcome our van. A week later in Ölgii, the tiny capital of the mountainous western province, we visit a local market and watch in amazement as a butcher, rather than throw scraps of meat into a bin, hurls the slabs high into the air where they are caught by packs of swooping eagles. That same day, at a Mongolian disco, whereas at a club in London you can be approached by a dodgy geezer selling pills behind the DJ booth, I am pleasantly surprised to be offered a half-eaten yak sausage. 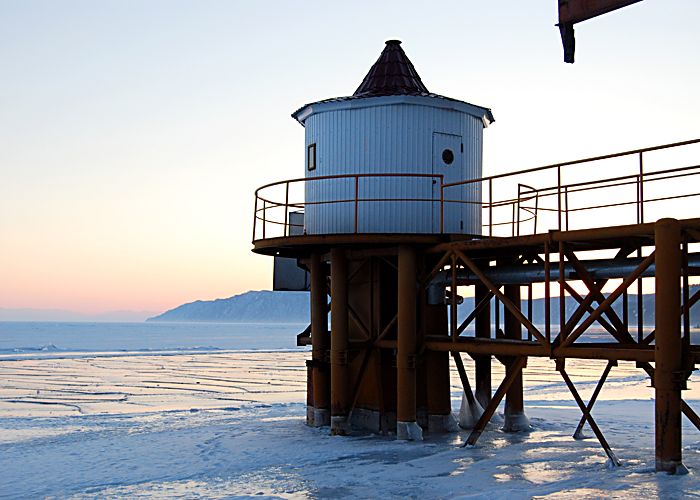 Yet this is civilisation compared to what awaits us in the south of the country. The Mongolians’ nomadic lifestyle means that they rely on their animals for survival and, as around half of the population roam the vast plains as farmers, encampments are minimal to help them move on throughout the year. So when staying the night with a family near the dusty town of Dalanzadgad, we are expected to help round up the goats at dusk in return for our bed for the night; when we arrive at breakfast near the Hustai National Park, families need help milking their animals before boiling the milk and turning it into salty tea, known as suutei tsai.

During these unique family-hosted overnight stops, the food takes a lot of getting used to. There are lashings of mutton-fat-flavoured noodle soup, steamed buuz dumplings with goat, and camel-meat porridge. We are also introduced to a local Kazakh speciality: boiled bones, fatty indiscernible organs and a skull, presented swimming in a plastic bucket.

As the days roll past, we discover that ‘the land of blue sky’ is a massive understatement. As the country is one of the biggest in the world, with 80 per cent of the land still untouched by human development, there is a mind-boggling amount of wide-open space. When driving from Bayan-Ölgii in the far western provinces of the country to the Gobi Desert, I feel as though we may as well be driving across the face of the moon: the sense of freedom is incomparable. 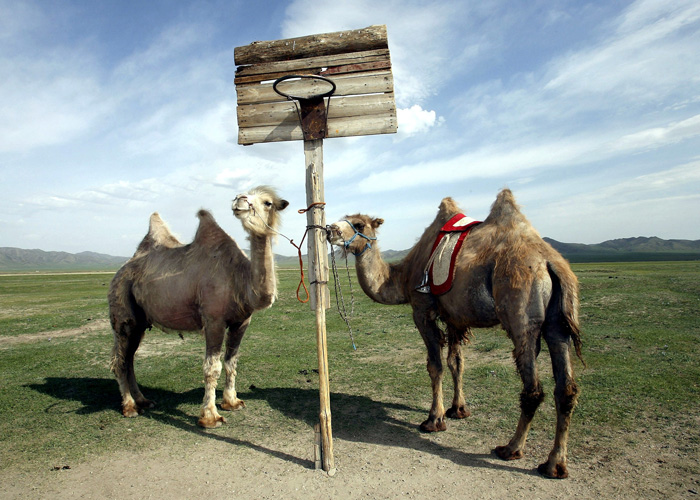 Few places on Earth can rival the bleakness of the Gobi, and it is in this desert that we find the blue sky we have been looking for. There are bone-dry plains, salt lakes and sandy wastes, camels, cranes, hawks and gazelles, and a seemingly endless sky. Driving east, we reach Yolyn Am, a beautiful canyon that has a year-round glacier snaking along the bottom of its ravine (one of the world’s only locations where you can have a snowball fight in a desert), and a 90-minute drive away is the Khongoryn Els sand dunes, which offer the best sandboarding opportunities this side of the Sahara.

Just when I think the trip couldn’t possibly become more surreal, our next stop takes us to the Flaming Cliffs, characterised by a collection of scarlet-red sandstone buttes and rock formations. Like Monument Valley in Arizona, it’s a popular place to go horse riding and act out childhood cowboy fantasies. In keeping with Mongolia’s ability to shock and surprise, more dinosaur bones and fossils have been found here than anywhere else in the world. 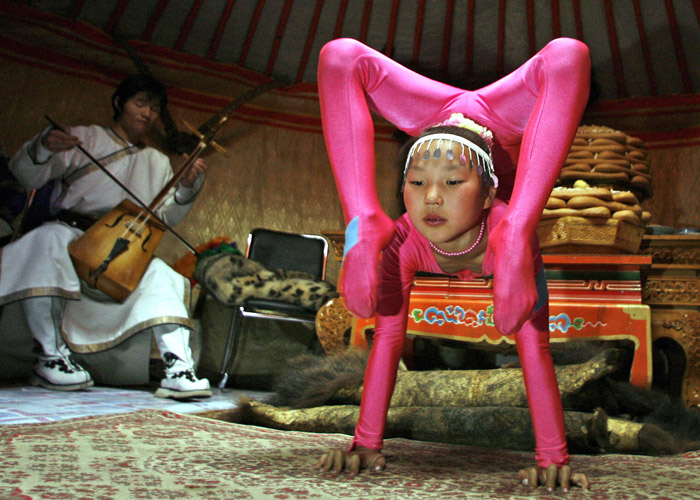 The following day, we reach Karakorum, the original focal point of the Mongol empire and the country’s previous capital. At the behest of a local hotel owner we are invited to a throat-singing concert. A traditional custom, throat-singing sounds like two cats drunk on airag fighting and vomiting all over each other.

On our final night out on the steppe, as we prepare to celebrate the near-completion of our odyssey, we are once again confronted by Mongolia’s fermented camel-milk vodka. This time, the sickly, stomach-churning liquid has been poured into an open-topped larch barrel that sits imposingly at the entrance to our host’s custom-built ger (a Mongol tent that looks like an IKEA lampshade).

In the previous three months, or so we are told, the concoction has been stirred on a daily basis with a buluur (a wooden masher), allowing the milk’s lactic acid bacteria and yeast to combine.

The science of this does nothing to make anyone feel any better. Sour camel’s milk is one thing, but what makes this even worse is that the lonely farmer and his wife are never going to be happy with just the one bitter-sweet round; Mongols are far too crazy for that. What follows the second glass and the third, I can’t really recall – but it does involve raucous renditions of the Mongolian national anthem, and a very drunk Scotsman sitting atop a very unhappy horse.

WHEN TO GO: May to September are the best months, with peak season falling in July for the annual Naadam festival.

ACCOMMODATION: The family-run Golden Gobi Hostel is Ulaanbaatar’s premier backpacker spot. It organises tours to every conceivable destination in the country, and it’s the perfect place to hook up with other travellers for tours to the Gobi Desert and beyond. Dormitory beds from less than £4pp, privates from about £12pp. (goldengobi.com)

Getting around West Wales