I can’t take my eyes off the machete. I’m not sure whether it’s the sight of the weapon that’s paralysing me, or the owner’s disarmingly beaming face. The only thing  for certain is that I’m rooted to the spot.  I watch as the woman working the knife deftly slices a pawpaw into 12 perfect pieces, which are placed on a platter alongside ruby-red watermelon and mango, then swiftly sold to a salivating bystander.

It’s all for show, of course, the fruit-seller drawing a crowd with her skills with the blade. But her smile is real and her sunny Colombian manner medicinal after months in the grey UK. Heading out of the Plaza de Bolivar, away from the countless snack vendors, fruit carvers and Panama hat-wearing shoe-shiners, I begin the first of many wanderings around Cartagena, the tropical jewel in Colombia’s crown, and the most enchanting city I’ve stumbled across on the gringo trail to date.

Not all fun and games

Colombia’s fifth-largest settlement – it’s surely the prettiest – launches a high-definition assault of colour on the eye, from the fuchsia-hued bourgainvillea spilling from overhanging hacienda-style balconies to the fluorescent greens, tangerines and lemons worn by the locals, and the candy-coloured facades of the houses. Monochrome doesn’t belong here. Nor does silence. Melodies and music echo through the streets. On my second day, I take in an ear-clanging combination of beatboxes, wind-up radios, barber-shop quartets, humming waitresses and, most memorably, a makeshift disco around a car boot filled with speakers, a TV and a few gallons of rum, where men congregate on plastic chairs to swig local liquor and appreciate the sound of the two-step. All before midday.

But beneath Cartagena’s dazzling, dizzying surface lies a darker past – one scarred by French and British invasions. Drifting along the wall while drinking a fresh coconut water, I find it hard to relate the joggers, chess players and interlocked lovers to the violence that Cartagena once endured. But, in the romantic Andalucian architecture, grandiose Spanish cathedrals and the many naval monuments, the city’s troubled history is splayed out before you,  to be read between deceptively pretty lines.

In stark contrast, the Cartagena of today has never been so at ease with clashing cultures, and that’s what draws people in. Nowhere is this truer than in Getsemani, a once run-down neighbourhood, five minutes from the Old Town’s landmark clock tower. Once a down-at-heel barrio riddled with drugs and gangs, Getsemani is now abuzz with up-and-coming urban cool. It’s still gritty, sure. But a flurry of independent bars, the freshest hole-in-the-wall pizzerias, fairy-lit music dens and elegant, artistic coffee shops line the streets, enticing you with their laidback ambience and throat-tinglingly strong rum con coco (rum with coconut cream). For just 7000 Colombian pesos (less than $3), this creamy concoction, drunk to a steel drum version  of Somewhere Over The Rainbow, reminds me that  I could only possibly be on the Caribbean coast. 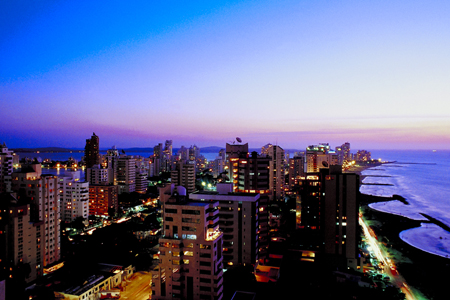 With new-found friends, I sit and soak up Getsemani as it warms up its notorious party muscle. Be warned, from Thursday until Sunday afternoon, Colombians bring seats, chessboards, deep-fat fryers, bottles of aguadiente – a local anise liquor that translates, ominously, as ‘fire water’ – sound systems and some serious booty-shaking skills onto the street for three days of socialising – something to bear in mind when booking your guesthouse or hotel. That, and bring the best earplugs money can buy.

Noise aside, it’s irresistibly fun. So we abandon all plans for dinner and indulge in a little people-watching. We stop off at one of the many night stalls framing the square. Here, freshly pulped fruit cocktails, meat skewers and my favourite, areppa con huevo, are served up piping hot. Made from fried maize and resembling a large hash brown, each patty holds a fried egg inside, which you then smother in piquant cilantro dressing and sour cream for only 1500 Colombian pesos (75c).

One traveller in our group observes, “the Colombians have obviously realised the street’s more entertaining than anything they’d find on TV”. He’s right. That and the city’s constant temperature of 32 degrees means it’s better to live your life outside, enjoying the balmy Caribbean trade winds when they blow through.

After ordering a second round of rums, we park ourselves in the middle of the throngs that congregate around the barrio’s 500-year-old Iglesia de Trinidad, a crumbling colonial church that serves as a massive hub of activity come sundown. Here, teenage boys sit on the stone steps to play backgammon, their shoulders bobbing to the city’s signature sound, champeta.

Originally a form of ‘Creole therapy’ to help Colombians forget about the country’s economic woes, over three decades, champeta has evolved from a basic blend of local salsa, jibaro and reggae to encompass different variations  of ragga and reggaeton. It’s the defining sound of Cartagena and the locals love it. The sultry pelvis-grinding and hip-swaying becomes more raunchy as the bottles of rum are drained. All in the shadows a Catholic church. 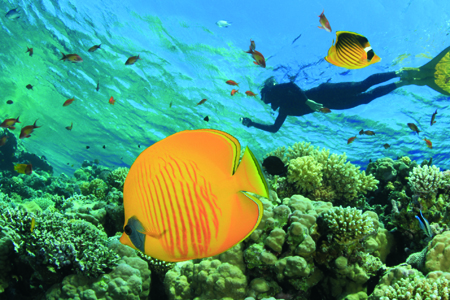 The following day, deciding that Cartagena has got the better of me and my liver, I board one of the vessels heading to the nearby Islas del Rosario. Just 45 minutes away via a bumpy speed-boat ride, this dreamy, protected marine park of 27 coral-fringed islands offers the chance to scuba dive, hike, horse ride, snorkel, kiteboard or simply daydream the hours away on platinum sands.

After touching down on Baru in Playa Blanca, I walk past sleepy cabanas, bamboo-thatched beach huts and a whole section devoted to hammocks, which you can rent for 7000 Colombian pesos (less than $4) to enjoy a night under the stars. I’m psyched for an afternoon of nothingness, until I spy one of several kiteboarding instructors flying over the waves and decide to give it a try.
Strapping my feet to the board, I’m unsure whether my upper body can handle the gusts here – between January and April, the winds get surprisingly fierce. This is why the region is a hotspot for the sport. That and the fact it’s affordable to learn (approximately $25 per lesson).

Grabbing the harness, I pull the bar with all my weight and watch the kite billow. The rope tighens and I start skimming over the waves with gathering pace. Fortunately, my instructor watches my back, for fear I may go flying off into the sunset. At one point my board takes off, and I really  do take flight – if only for a few seconds. It feels incredible. By the end of my stint I’m exhausted, elated and energised. I’m also starving.

Fortunately, Playa Blanca’s small selection of budget-friendly fish shacks comes up trumps and I indulge in some grilled red snapper, fried green plantain and arroz de coco.  I doze to the sounds of the ocean and the occasional albatross diving into the blue, until I’m woken by the beaming skipper from our boat, who tells me it’s “time to head back to the big shore, lady”. Looking at the paradise around us, something tells me there’s only one reason the skipper is so keen to get back – the next party is about to start.

Miley Cyrus is the new face of Marc Jacobs

The Wonderful City of Lviv

Win £2200 worth of FREE travel right now at the TNT Travel Show, London

The cheapest areas to rent in London