The details and timing of the ceremony, which is planned to last two days, were kept under wraps and secret from the outside world until the last minute. Mourning uniformed soldiers in their thousands took to the freezing streets to pay their last respects to the leader in a three hour procession which covered a 40km route.

A huge smiling portrait of Jong-il was carried on top of one of the funeral cars, as his son and expected successor Kim Jong-un, thought to be in his late 20s with little previous experience, walked alongside the car carrying his father’s coffin.

The controversial leader died following a heart attack on 17 December. He was 69 years old.

A solider interviewed on state-controlled television said “The snow is endlessly falling like tears. How could the sky not cry when we’ve lost our general who was a great man from the sky?”

On December 26 across the border in Seoul, South Korean protesters defaced North Korean flags and held up signs mocking the former leader in the run-up to the expected funeral. 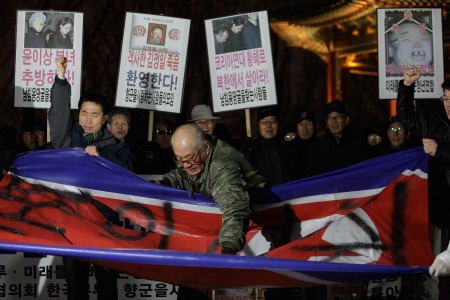 The Art of the Album, Southbank

NZ by those who know it best: Air New Zealand cabin crew