The parody video, which begins with the line “Every bigot shutup” and contains near-nude men and lashings of rude words, was flagged as inappropriate content and temporarily taken down from YouTube.

“It’s been flagged by users as inappropriate because of sexual content and stuff like that,” said one of the creators Olivia Lubbock, who along with Lubbock along with fellow writers Zoe Ellwood and Adelaide Dunn created the skit for the University of Auckland Law Revue.

“My opinion is people don’t like the message behind it. It was meant to be a comedic sketch and the fact it’s been taken down is a massive double standard.” 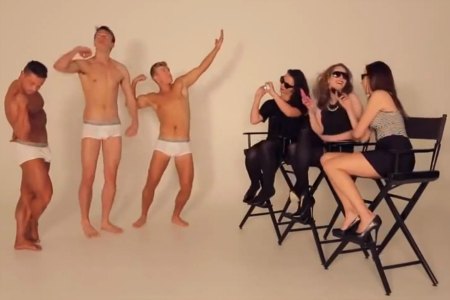 The lyrics of the reworked hit take a dig at the original song’s controversial content and casual female nudity with lines like: “What you see on TV, doesn’t speak equality, it’s straight up misogyny.”

“Boy you’d better quit all your sexist ways, so hear our manifesto of the modern age. It’s time to undermine the masculine confines cos we don’t wanna grind,” sing the 22-year old law student, during the video which was produced by Milon Tesiram.

The video, one of many recent parodies taking an alternative view of the smash hit single, had been viewed over 300,000 times before being flagged for offensive content.

Things Are Looking Up