The Walkie Talkie skyscraper in the City seems to be dazzling the City, for all the wrong reasons. The unusual concaved shaped, and 38-storeys worth of glass seem to be magnifying sunbeams to emit an intense beam of light onto Eastcheap.

Both motorists and passers-by have dubbed the building the Walkie Scorchie – it’s latest victim being director of a tiling company Martin Lindsay’s Jaguar XJ.

Lindsay told City A.M. that “They’re going to have to think of something. I’m gutted”, as he returned to his car to find that some of the panels in his car had been warped and were beyond repair. City A.M. even described that an hour after the incident there was still “a smell of burning plastic.” 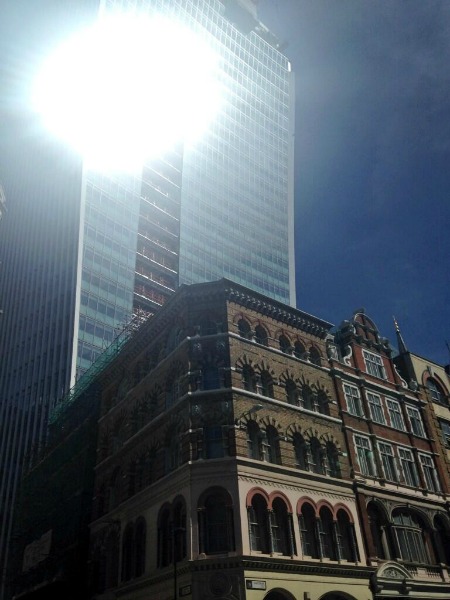 The Jaguar wasn’t the only vehicle damaged it seems as Eddie Cannon, a heating and air conditioning engineer, found that his Vauxhall Vevaro suffered the same fate on Wednesday. City A.M. reveals, that Cannon found “every bit of plastic on the left hand side and everything on the dashboard [had] melted”.

But the annoyance doesn’t stop there, as passers-by have even described to the Evening Standard, like PR consultant David Banks, that “It was uncomfortable to be underneath” he even added that some people were “a bit bewildered and dazzled”.

Land Securities and Canary Wharf have said that they are investigating, and have agreed to suspend three parking bays in particular. The developers of the building, Land Securities, have released a statement; which the London Evening Standard reported, that they “took advice on such matters during the design stages of the project and are satisfied that steps have been taken to ensure such risks have been mitigated.”

The City of Bob